Highly Anticipated Book Releases for the Second Half of 2019

The year is half over, which means we can start looking forward to all the fall releases. I have a hefty list of highly anticipated new books this time around. I'm looking forward to the next book in several series. I'm eager to read new books by several authors who I absolutely adore. I've also got a few new to me authors on this list, and I can't wait to give their books a go. What books are you eagerly awaiting? 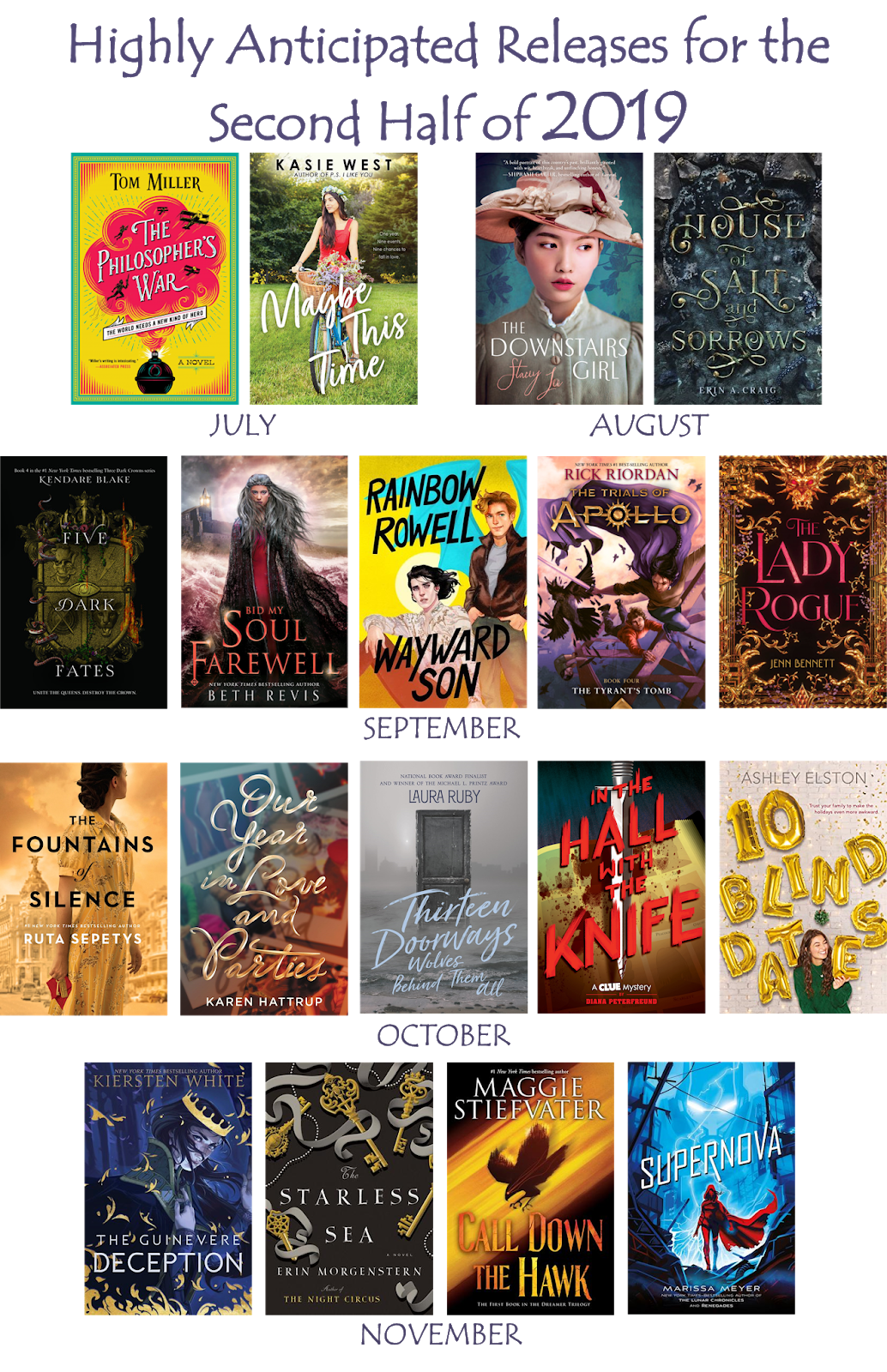 The Philosopher's War by Tom Miller
The first book in this series, The Philosopher's Flight, was such a surprising delight. It was one of my favorite books of 2018, and I'm so excited for the sequel. (series featured here)

The Downstairs Girl by Stacey Lee
I've never read any of Stacey Lee's books, which is a real shame because I love historical fiction. I'm going dive into her oeuvre with her newest book about a girl who works as a lady's maid in turn-of-the-century Atlanta.

House of Salt and Sorrow by Erin Craig
This debut novel is a retelling of the Twelve Dancing Princesses fairy tale. It's been too long since I've read a good fairy tale retelling.

Bid My Soul Farewell by Beth Revis
Earlier this year I read the first book in this series, and I loved it. I'm excited to find out what happens next. (series featured here)

Wayward Son by Rainbow Rowell
I wasn't expecting to love Carry On as much as I did. I really, really loved it. I'm up for more Simon, Baz, and Penny. (series featured here)

The Tyrant's Tomb by Rick Riordan
I love the Trials of Apollo series. Now that we know who the three emperors are that make up the evil Triumvirate (which I successfully guessed, by the way), what's going to happen? (series featured here)

The Lady Rogue by Jenn Bennett
I love Jenn Bennett's contemporaries, and I love historical fiction. I'm excited to journey to the Carpathian Mountains with these characters. (Jenn Bennett's books featured here)

The Fountains of Silence by Ruta Sepetys
Ruta Sepetys is a master of historical fiction. Her newest book is set in General Francisco Franco's fascist Spain in 1957. (Ruta Sepetys's books featured here)

Our Year in Love and Parties by Karen Hattrup
I adored Karen Hattrup's debut novel. I read it in one sitting, and it was one of my favorite books of 2016. I'm so excited to read her sophomore book. (Frannie and Tru featured here)

Thirteen Doorways, Wolves Behind Them All by Laura Ruby
Bone Gap was my favorite book of 2015. A World War II novel by Laura Ruby is almost too good to be true. (Bone Gap featured here)

10 Blind Dates by Ashley Elston
This books takes place during Christmas, and I love the idea of reading it during December. It's about Sophie who, after a bad breakup, gets set-up on a series of blind dates by extended family members.

The Starless Sea by Erin Morgenstern
Like so many people, I am so excited that the author of The Night Circus has a new book out this November.

Supernova by Marissa Meyer
The conclusion to the Renegades series! (series featured here)