Favorite Reads of 2018 (The Halfway Mark)

Every summer we like to give you a little sneak peak into our favorite reads of the year. Sticking to five each is not easy, but I can personally vouch for all of Paige's picks because, for the first time ever, I've also read every single one of her picks. 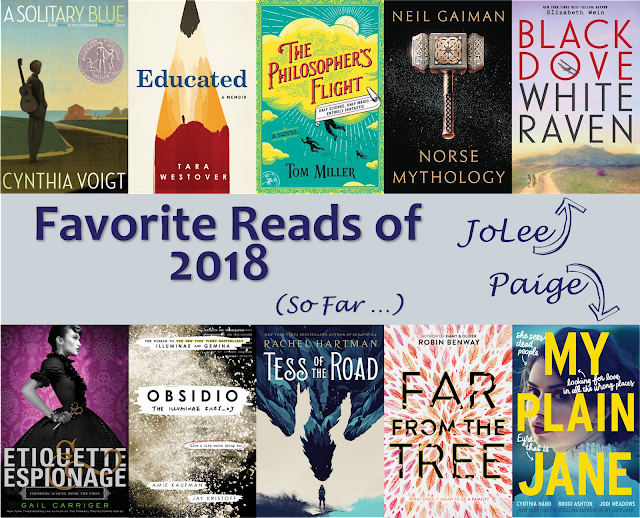 
A Solitary Blue by Cynthia Voigt:
This year I finally started the Tillerman Cycle after many years of friends telling me to read it. This third book in the series is so heartbreaking and beautiful and healing all at once. I really love how I have a connection to the setting in this series. This book takes place in Baltimore, Charleston, and on the Eastern Shore. I will be the first to admit that that personal connection is making this series even more wonderful to me.

Educated by Tara Westover:
I had to put this one on the list for the shear number of conversations I've had about it. While reading it I kept texting my friends who had already finished it. Another friend finished it and promptly texted me saying, "We have to talk about this book!" If you read it, find some friends to read along. This is a book that demands conversation.

The Philosopher's Flight by Tom Miller:
This alternate World War I era novel full of magic and feminism is both incredibly entertaining and thought-provoking. I'm thrilled that there's going to be a sequel. (featured here)

Norse Mythology by Neil Gaimon:
I am not nearly as well-versed in Norse Mythology as I am in Greek Mythology, but lately I've had a lot of reasons to learn more. Neil Gaiman's storytelling is both entertaining and informative. I definitely feel like I can hold my own a little more in the Norse Myth world.

Black Dove, White Raven by Elizabeth Wein:
I loved this addition to the Young Pilots Series. The 1930s Ethiopian setting is so vibrant and the writing so rich. I loved learning about this moment in history through the eyes of these beautiful characters. (featured here)


Etiquette and Espionage by Gail Carriger:
I rocketed through this entire series earlier this year. It's great on audio, has a great steampunk/ paranormal world, and well, you can read all the reasons I love it here.

Obsidio by Amie Kaufman and Jay Kristoff:
An exceptional finale for an exceptional series. It's fabulous when a series closes as strongly as this one did. Read about all the reasons we love the series here.

Tess of the Road by Rachel Hartman:
I absolutely adore Rachel Hartman's Seraphina books, and I was so excited to read another book set in the same world. Tess is a bit more psychological and a bit more philosophical, but it's very bit as good. (series featured here and here)

Far from the Tree by Robin Benway:
Robin Benway really knows how to bring on the feels. This book about three adopted siblings meeting for the first time is so touching. (featured here)

My Plain Jane by Cynthia Hand, Brodi Ashton, and Jodi Meadows:
The authors of My Lady Jane are at it again. This time the Lady Janies take on Jane Eyre, and their version is quite a bit funnier than the original.