The Story Continues: Now I Rise, The Crown's Fate, and One Dark Throne

These three sequels are all divine. The Crown's Fate ends the series, but I am very eager to read the follow-ups for the other books.

Have you read any of the books in these series? What did you think of the sequels? 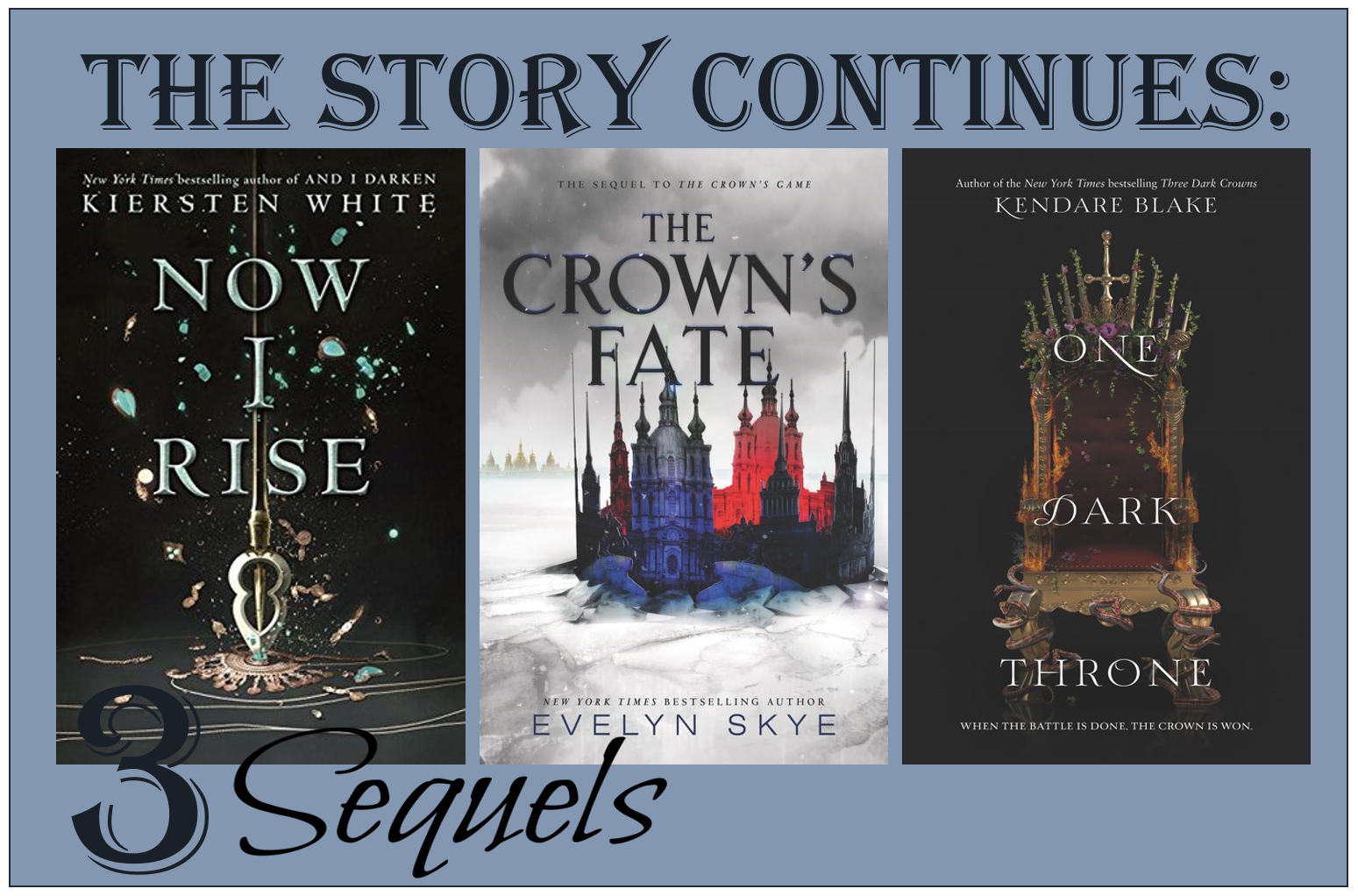 Now I Rise by Kiersten White


The sequel to Kiersten White's And I Darken was one of my most anticipated books of last year. Now I Rise finds our characters split up. Lada Dracul is fighting her way to the Wallachian throne. Mehmed's conquest of Constantinople draws ever nearer, and the Sultan has sent Radu into the ill-fated city as a spy.

Definitely read this book if you are in the mood to feel raw and heartsick. Kiersten White has written some of the best and most emotional depictions of war and conquest that I've ever read. I'm still kind of reeling over the takeover of Constantinople. Radu, who is in the besieged city, is definitely the most compassionate of our three main characters. Because he is able to see the humanity and goodness in these supposed enemies, he is torn and broken and so is the reader who is privy to the tragedy of it all.

This series has so much going for it. First of all, I love the setting and time period. It's not a common one for historical fiction, and it is so fascinating, dynamic, and brutal. Secondly, the characters in this series are so well done. Every one of our three main characters is so complicated. There are betrayals upon betrayals in this book, and all of the characters do such terrible things. Finally, Ms. White handles subtleties and complications so well. The desire for power, the role of religion, the cost of love are all deftly crafted.

If you are a lover of Mehmed, beware, he is largely absent in this book although his presence is felt even in his absence. I did get a little tired of Radu's pining after Mehmed but that lessened the longer Radu was in Constantinople. Radu's storyline was definitely my favorite because of its emotional impact. Lada is edging ever closer to Vlad the Impaler's violent reputation.

Although marketed as YA, I don't see anything about this book that would set it squarely in that category. It's very mature in its themes and situations.

The Crown's Fate by Evelyn Skye

I found The Crown's Game to be a surprising gem when I read it last year. I really enjoyed the mix of magic, competition and Old Russia. The book was full of elements I love--an alternate history, magic, a complicated relationship, and a fabulous setting.

The Crown's Fate begins on the heels of the final events of The Crown's Game. Vika is now the Imperial Enchanter. Pasha is trying to fill his father's very large shoes, and he's never been sure that he's cut-out to rule. And poor Nikolai is a shadow of his former self and trapped within his Steppe bench.

Nikolai discovers a second chance at life but it's a dark one that slowly corrupts his soul. (Yikes, his mother is so creepy.) Now Vika and Nikolai are pitted against one another once again. The stakes are even higher than they were in the first book.

I didn't like The Crown's Fate quite as much as I liked the first book. I still enjoyed it, but it just didn't hit that sweet spot quite like the first book did. I can see that this second book needed to go in the direction that it did, but I missed Nikolai. This new Nikolai was so dark and villainous and not at all himself (which was kind of the point).

I did like the implications of the power of magic as it was revealed to the people. And, once again, Evelyn Skye came up with some pretty cool magical creations.

One Dark Throne by Kendare Blake


I rocketed through the first book in Kendare Blake's dark fantasy series, Three Dark Crowns. (See, it even has dark in the titles)

On the island of Fennbirn a set of triplet girls is born to every queen. These children each possess a powerful magic. Arisinoe is a naturalist who can speak to plants and animals, Katharine is a poisoner who can ingest powerful poisons, and Mirabella is an elementalist who can control wind and flame. The three sisters are on the eve of the competition that will determine who will become the next queen. And it's a fight to the death.

In book two, the competition season is in full swing. Arisinoe is hiding a secret that could very well save her life. Mirabella is still too tenderhearted to be a killer. And Katharine. Well, she's not quite right.

The end of Three Dark Crowns really left me wanting more, and One Dark Throne was high up there on my most-anticipated list. The second book is great too. This book has a full cast of characters. I like how the reader gets to know not only the queens but also the individuals who have shaped these three sisters over the years.

The series is interesting in terms of how it's told. Each sister gets equal billing, and the perspective moves from queen to queen. I think that this can, at times, make the pacing a little tricky, but I really like that the queens can all be considered main characters. The readers loyalties are good and split. It's quite a dilemma.

Kendare Blake has conditioned us to expect some crazy twists and reveals at the end of each installment. So it's no surprise that once again, I find myself eager for the next book.

All books reviewed by JoLee.