Have a Listen: Audiobooks We Love

Every year the number of audiobooks I listen to increases. I just love being read to. A good audiobook can make a great book even better, and audiobooks have helped me conquer many books that I was afraid might be a little dull. Here are some of my favorites from the last year or so. Are you an audiobook fan? I'd love if you'd share your favorites with me! (More of our favorite audiobooks here.) 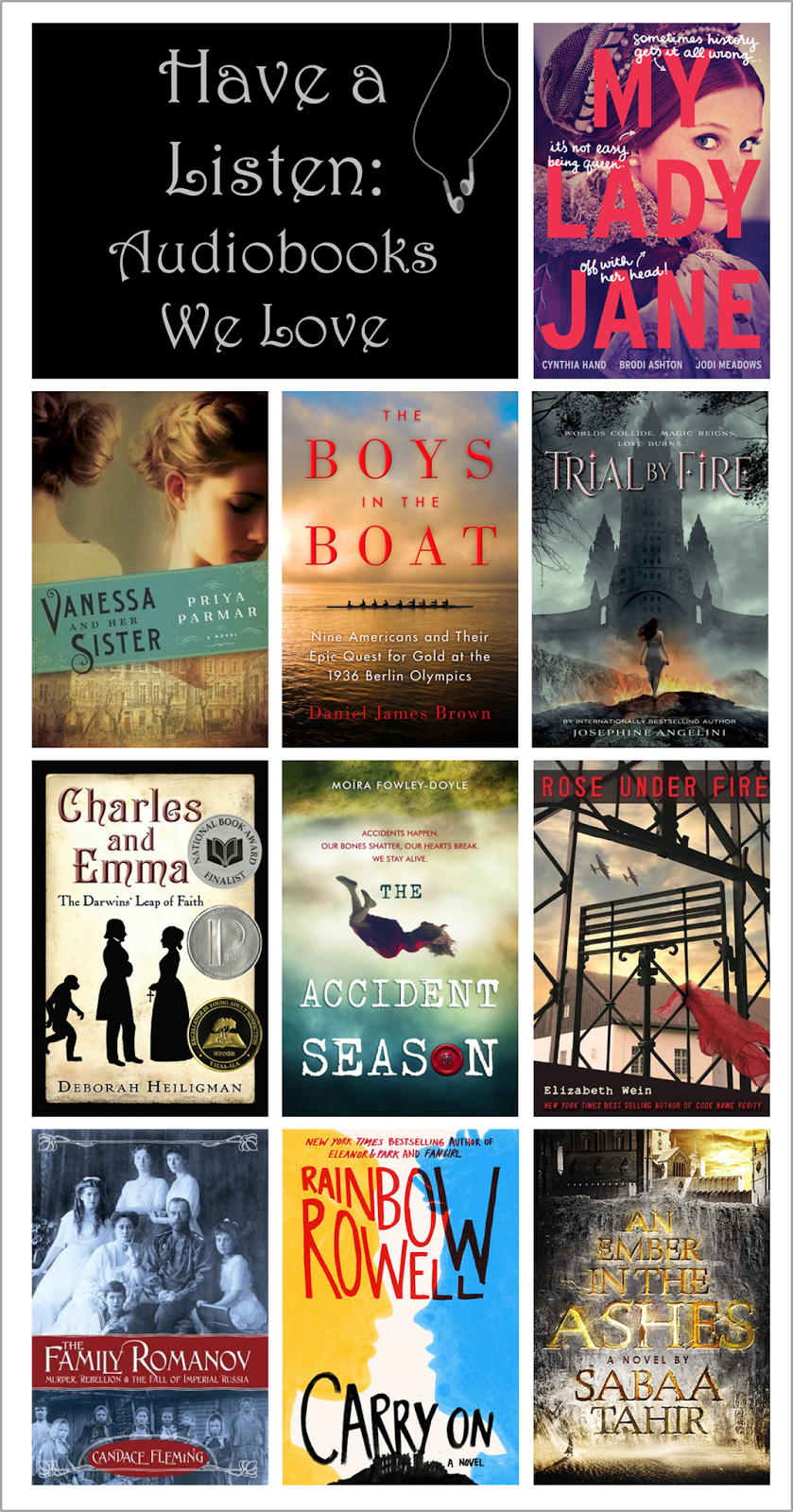 My Lady Jane by Cynthia Hand, Brodi Ashton, and Jodi Meadows:
This book turns me into a crazy fan! I downloaded the audiobook the day it came out and loved every minute. Kathrine Kellgren narrates the book. (She also narrated Austenland which is one of my very favorite audiobooks). Kellgren's narration made the book even funnier. She hits it out of the park with her over-the-top, tongue-in-cheek style. (Is that enough idioms for one sentence or what?)

Vanessa and Her Sister by Priya Parmar:
I loved this epistolary novel about Vanessa Bell, Virginia Wolf, and the rest of the Bloomsbury Group. I think the letter/ journal format works really on audio, and once I got used to who was who, I fell completely in love with this book and the narration. I'd love a sequel. (featured here)

The Boys in the Boat by Daniel James Brown:
This book made my favorites of the year last year. It's about the rowing team that won the Olympics in 1936. I loved it. I recommended it to all my real-life friends and pushed it on this blog tons. That the audiobook is read by the late Edward Herrmann is an added bonus and a real treat.

Trial by Fire by Josephine Angelini:
I've listened to the first two book in the Worldwalker series, and I have found them both to be absolutely unputdownable (that is totally a word). Once I start listening to these books I'll find every excuse in the world not to stop: take the long way home, do some more housework, stay up too late. I'm so eager for the third book in the series to come out. (featured here)

Charles and Emma: The Darwins' Leap of Faith by Deborah Heiligman:
I listened to this book last year when I was working on this post. I found it so interesting that I decided to pick it for my book club selection the next month. In Heiligman's book, Darwin's doubts about God and Emma's religiosity are a microcosm from the greater conflict between the theory of evolution and the Christian society. I appreciated that Heiligman treated each side with respect.

The Accident Season by Moira Fowley-Doyle:
This book is worth listening to just so you can enjoy the reader's lovely Irish accent. Cara's family calls October The Accident Season because they always have a lot of injuries during that month. I listened to this around Halloween, and it was a perfect spooky seasonal read.

Rose Under Fire by Elizabeth Wein:
This book is brilliant in audio format. Rose is a poet, and, as much of Rose's poetry was composed in Ravensbrucke without pen and paper and then recited and memorized by her friends there, the audio version had an added authenticity. And Rose's poems are stunning, raw, and heart-wrenching. Also, Rose does some singing, and I loved hearing the melody along with the words. (featured here)

The Family Romanov: Murder, Rebellion & The Fall of Imperial Russia by Candace Fleming:
I much prefer my non-fiction in audio format, and this book was obviously the right one for me because I could not stop talking about it. There is so much romanticism that surrounds the last Russian Imperial family, and I love that this book is the real deal. It tells the story straight and the results are fabulously demystifying. (featured here)

Carry On by Rainbow Rowell:
I loved Fangirl and so I couldn't pass up the chance to read Carry On, the book that grew from Cath's fanfiction in Fangirl. I highly recommend the audio version (obviously, the book made this post); I'm fairly certain I wouldn't have enjoyed this book as much as I did if I had read the paper version.

An Ember in the Ashes by Sabaa Tahir:
This book was the big YA fantasy of last summer, and if you listen to it now you'll be all primed for the sequel which comes out in late August 2016. The audio version has two narrators--one for Laia and one for Elias. I especially had a hard time turning off the book when Elias was narrating. I'll definitely be listening to the sequel. (featured here)
Posted by JoLee at 1:48 AM