The Story Continues: The Empress, A Reaper at the Gates, and Two Dark Reigns

All three of these penultimate series additions are just divine. I can't wait to read the final book. 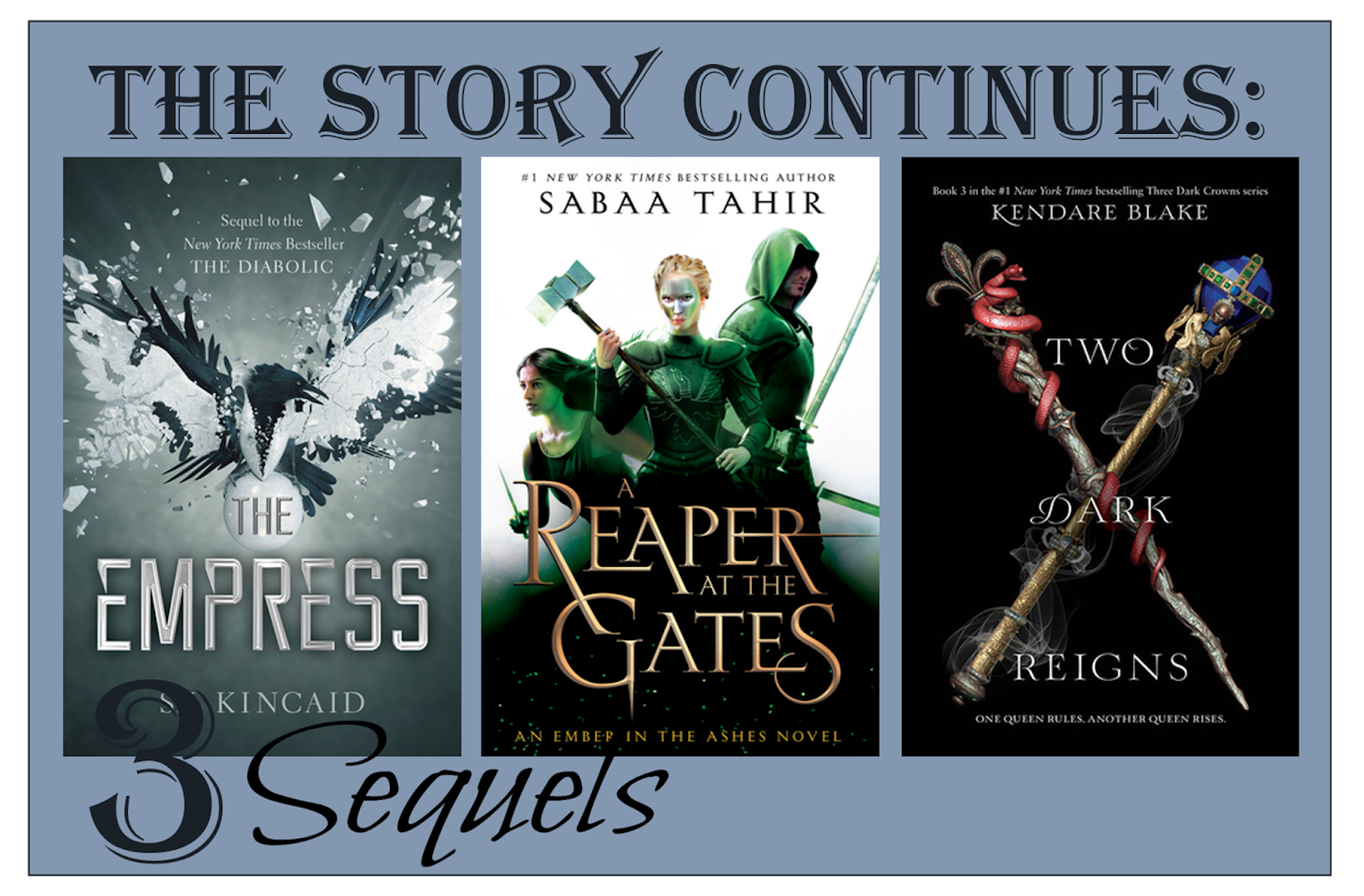 The Empress by S.J. Kincaid


I was surprised by how much I loved The Diabolic by S.J. Kincaid. I'm all in for this new subgenre of sentient AI, so I probably shouldn't have been that surprised. The Diabolic has a really interesting world, great political intrigue, and Nemesis is a pretty excellent narrator.

Nemesis is a Diabolic. She was fabricated to protect Sidonia, and in the first book she impersonates Sidonia in the emperor's court. While there she gets involved with the heir and his plot to ascend to the throne and bring back the outlawed sciences.

In The Empress, Tyrus is now emperor. He and Nemesis are idealistic and optimistic and overly confident that they will be able to turn the empire around. Boy were they wrong.

I was very impressed by The Empress. I really loved The Diabolic and didn't necessarily think that it needed a sequel, so I was a little wary going in because what else was there to do? Well, I was wrong. There was a lot left to do. Tyrus's seat on the throne is shaky. Neither the nobles nor the vicars are inclined to support him because he has defied their religious mandates.

I like how The Empress expands upon the Helleonic religion. I really love a good fantasy religion, and I find this one to be very well done. I can completely buy that an empire in space that rejects science would worship a Living Cosmos. At the same time, that faith is controlling enough to really play into politics. I thought the sacred city was so clever, as was how badly the rejection of science has backfired.

This book has so many reversals. You think that things can't get any worse, and then they do. And then you think that things are getting better just to learn that they aren't! This book has plenty of suspense and action. I also really loved the reference to Hamlet (a book I thought about a lot while reading The Diabolic). Also, I am a big fan of Tyrus and Nemesis as a couple. But, you guys, the end of this book is such a stab to the heart. I wish I could read the final book in the series right now. It's going to be hard to wait a whole year.

A Reaper at the Gates by Sabaa Tahir

Series: An Ember in the Ashes (featured here and here)

Sabaa Tahir's An Ember in the Ashes series is currently one of my favorite YA fantasies. A Reaper at the Gates is the third in this four-book series set in a violent Roman/ Middle-Eastern-inspired world.

Laia is from the Scholar class. Her people have been systematically oppressed by the ruling Martials for generations. Laia first became involved with the other two main characters in this series when she volunteered to spy on the Commandant of Blackcliff Military Academy. Since her days as a spy, she has escaped with Elias, freed her brother from prison, and become a reluctant leader of the rebellion.

Elias is the son of the Commandant whom we first met when he was competing to become the next emperor. Elias was never ruthless enough to be emperor, and during the competition he fell in love with Laia, and they escaped together. Elias is now the new Soul Catcher, and he once again finds his duty and his humanity in conflict.

Helene was Elias's best friend at Blackcliff. She finished the competition in second place becoming the next Blood Shrike. Helene is now the only one who stands between the Commandant and her desire to usurp the throne.

Let's just say that it was worth the wait for A Reaper at the Gates. This book was so intense, so emotional, and quite a nail-biter. Sabaa Tahir is not afraid to be brutal to her characters. I really enjoyed the creepy atmosphere of this book. Elias, who is now charged with ushering the dead to their resting place, has such a ghoulish job, and it kind of gives me chills to think about all the things that go wrong with the ghosts.

I can't wait to see how Sabaa Tahir wraps up the series in the next book. I'm sure that it will be epic.


Kendare Blake's Three Dark Crowns series may win the award for "Most Killer Cliffhangers." I've finished every one of the books in the series so desperate to read the next.

On the island of Fennbirn a set of triplet girls is born to every queen. These children will each possess a powerful magic. When the series begins, Arisinoe is a naturalist who can speak to plants and animals, Katharine is a poisoner who can ingest powerful poisons, and Mirabella is a elementalist who can control wind and flame. Last sister alive becomes queen. Except two of the sisters refuse to play the game, and at the end of the second book Mirabella and Arisinoe escaped to the mainland leaving Katharine queen by default.

In Two Dark Reigns the past and present collide. On the mainland, Mirabella and Arisinoe are haunted by The Blue Queen, who famously created the mist that protects the island. Back on Fennbirn, the mist has turned toxic, leaving many dead. Katharine attempts to keep her terrified citizens calm while she struggles to keep the dead queens who possess her under control.

Two Dark Reigns might be my favorite in the series so far. I love how Kendare Blake weaves the mythical Fennbirn of the past with the Fennbirn of the present. I found the story of the Blue Queen to be absolutely fascinating. I love all the dark and creepy elements of this series, and they really shine in this book: the haunting, the mist, Katharine. It's all so deliciously eerie.