Highly Anticipated Releases for the First Half of 2018

Over the past few years, these highly anticipated releases posts have become a bit more difficult for me to do. This one took some serious thought. The reason is that when I put books on these lists, I feel a bit of pressure to, you know, actually read them. 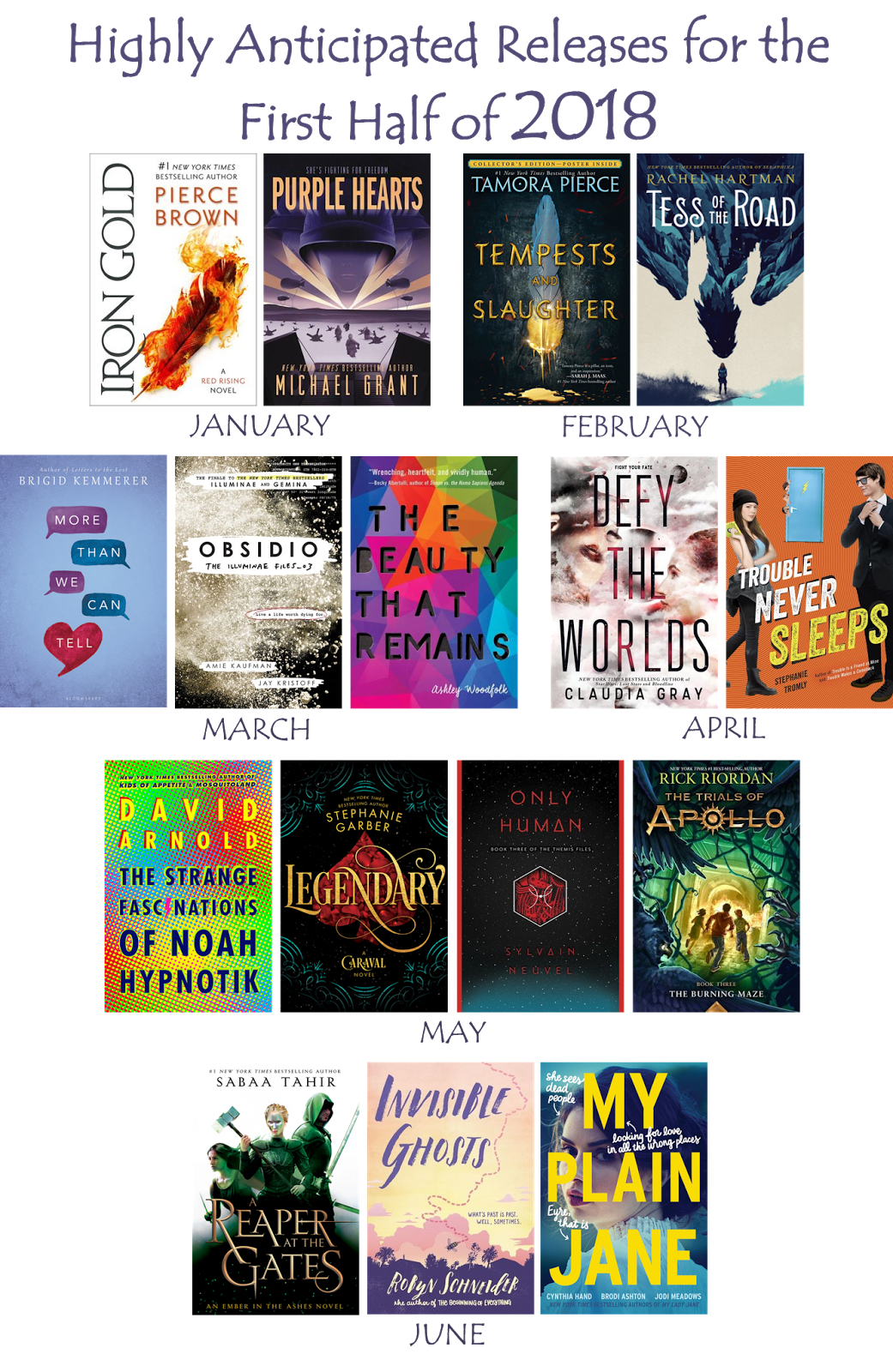 Iron Gold by Pierce Brown:
I loved the Red Rising Trilogy, and I've already heard good things about the newest addition to the world from some trusted friends. (Series Salute to the trilogy here.)

Purple Hearts by Michael Grant:
Honestly Silver Stars was a bit of a slog for me, but I've heard this is a great conclusion to the series, and I would like to finish it off. (series featured here and here)

Tempests and Slaughter by Tamora Pierce:
All the love for Tamora Piece over here at Intellectual Recreation. And as we are such big Emperor Mage fans and intrigued by Ozorne, we are all in for a Numair series that will get us up close and personal with the ambitious prince. (Much Tamora Pierce love here)

Tess of the Road by Rachel Hartman:
Seraphina is one of my all-time favorite books. I'm so thrilled that I get to go back to her world. (series featured here)

More Than We Can Tell by Brigid Kemmerer:
Letters to the Lost was one of my favorite books of the year last year. I'm definitely up for anything new by Ms. Kemmerer.

Obsidio by Amie Kaufman and Jay Kristoff:
The conclusion to the Illuminae series is probably (no most certainly) my most highly anticipated book of the year. (series featured here and here)

The Beauty that Remains by Ashley Woodfolk:
I'm all in for sad books these days. This one looks heart-breaking.

Defy the Worlds by Claudia Gray:
The first in the series, Defy the Stars, was one of my favorite reads of 2017. I'm so excited that this story is continuing. (But, ick, I do not like the new covers.) (series featured here)

Trouble Never Sleeps by Stephanie Tromly:
I'm such a big fan of Trouble is a Friend of Mine and Trouble Makes a Comeback. (series featured here and here)

Legendary by Stephanie Garber:
The sequel to the intriguing Caraval.

Only Human by Sylvain Neuvel:
Gotta find out what happens next ASAP after that cliffhanger. (series featured here)

The Burning Maze by Rick Riordan:
I will never tire of Apollo as narrator. I wonder if my guess as to who the next emperor is is correct.

A Reaper at the Gates by Sabaa Tahir:
A Torch Against the Night was so good. Bring on book 3. (series featured here and here)

Invisible Ghosts by Robyn Schneider:
Extraordinary Means was a favorite a couple of years ago. I'm ready for another book from Ms. Schneider.

My Plain Jane by Cynthia Hand, Brodi Ashton, and Jodi Meadows:
So excited to see what the Lady Janies do next. This is one is a very close second behind Obsidio. (series featured here)