The Story Continues: Blood for Blood and Silver Stars

Last year, during our first World War II Week, we did a Reading a Theme featuring five books that take the World War II era into the realm of speculative fiction. In the last few months sequels came out for two of our favorite books from that post. Here we share our thoughts on Blood for Blood, the sequel to Wolf by Wolf by Ryan Graudin and Silver Stars, the sequel to Front Lines by Michael Grant. 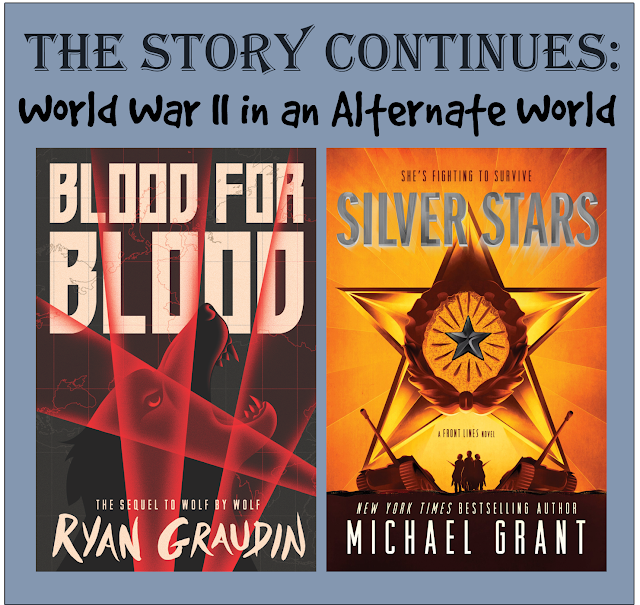 Blood for Blood by Ryan Graudin

Ryan Graudin's Wolf by Wolf series imagines what the world would be like if Hitler and the Axis Powers had won the war. I really enjoyed Wolf by Wolf. In fact, I liked it so much that I passed the book along to several of my friends and then selected it as my book club pick last June. (Good discussion, by the way. It turned out to be a excellent book club choice.) When I read Wolf by Wolf, I found myself absolutely fascinated by Adele. She's not really in the book, and yet, she is so very present. I wanted to know why Adele would have entered the Axis Tour, disguised as her twin brother, how she got away with it, and what exactly went down between her and Luka. So, I read the e-novella Iron to Iron as I not-so patiently waited for Blood For Blood. I never read e-novella (seriously, never), so the fact that I made an exception here says a lot about how much I liked the Wolf by Wolf (and how curious I was about Adele).

With Wolf by Wolf and Iron to Iron under my belt, I was all geared up for Blood For Blood. The second in the series opens just seconds after the final moments in Wolf by Wolf. Yael has successfully killed the faux-Hitler and in the process discovered that he is, in fact, a faux-Hitler. When Yael flees the scene, Luka follows her, and because of him the two get captured. Meanwhile, Felix has been dragged into the investigation and agrees to cooperate if the SS will spare his family.

So... my feelings about this sequel were kind of mixed. On the one hand, I was really impressed with how Ryan Graudin worked things so that she could keep the three main characters together. I also liked the reintroduction of a figure from Yael's past. For the most part, the way that the plot proceeded and the twists and turns, and the way that Project 85 had become central to the Reich's all really worked for me. I especially liked the climax where Luka puts all the pieces together.

However, I felt that this book suffered from a growing pain that I see a lot in dystopia and fantasy series. Many of those books start out with a first book that is focused on a single character and a singular mission. Consider The Hunger Games. Book One is all about Katniss getting through those games. In this series, book one was centered on Yael and the Axis Tour. In many of these series, once that first mission is accomplished, the focus of the next book (or two) is overthrowing the whole empire. (Consider Mockingjay as an example.) And, it seems to me, that such a large jump is really hard to do. I could really feel the big jump in this sequel.

In his Front Lines series, Michael Grant imagines what the war would have been like if women had been eligible for the draft and fought on the front. His series follows three girls serving in the armed forces. Rio is in the army. She is a tough and a very good soldier. Frangie is a medic. She is also African-America and serves in an all-Black unit. Rainy is in intelligence. She knows several languages and goes undercover behind enemy lines. She is also Jewish, which adds an extra layer of danger to her missions.

One thing I love about this series is how Grant confronts the attitudes and prejudices experienced by his soldier girls. The issues of gender, race, and religion are navigated in a way that feels so truthful and really makes the reader consider how all of this would have gone down if it really happened.

In book one the characters spent a lot of time gearing up for war, and now, in book two, they are all seasoned soldiers. Silver Stars is dedicated to war and all its brutality, heroism, fear, and boredom. Personally, I often get a little bogged down by books with battle scene after battle scene, and I did feel that a little in this book. There is a lot of fighting. Also, in some ways this book is hard to read because the characters are put through such traumatic situations. Rainy's story line, especially, was absolutely terrifying both because of the ineptitude of her superiors and the physical danger she was in.

We see a lot of growth in the characters in this book. Rio, especially, is something of a symbol of how war changes a person. It's not necessary for better or for worse, she's just changed, and some characters are less okay with that than others. Rio has also grown up a lot over the last few months. She was underage when she enlisted and didn't really have a sense of who she was. Now she's having to figure that out on the battlefield.


Blood for Blood and Silver Stars reviewed by JoLee.