This week's Top Ten Tuesday hosted by The Broke and the Bookish is "Top Ten Authors I've Read The Most Books From," and, while we are really excited to see other people's top ten authors there is no way that we were about to spill the beans on all of our most read authors in one fell swoop. We do, after all, have a blog series over here called Most Read Authors.

Instead, we decided that we would do a post on our number one most read author: Tamora Pierce. She sits at the number one spot for both myself and for Paige. Paige has read 17 of her books, and I've read a staggering 29! 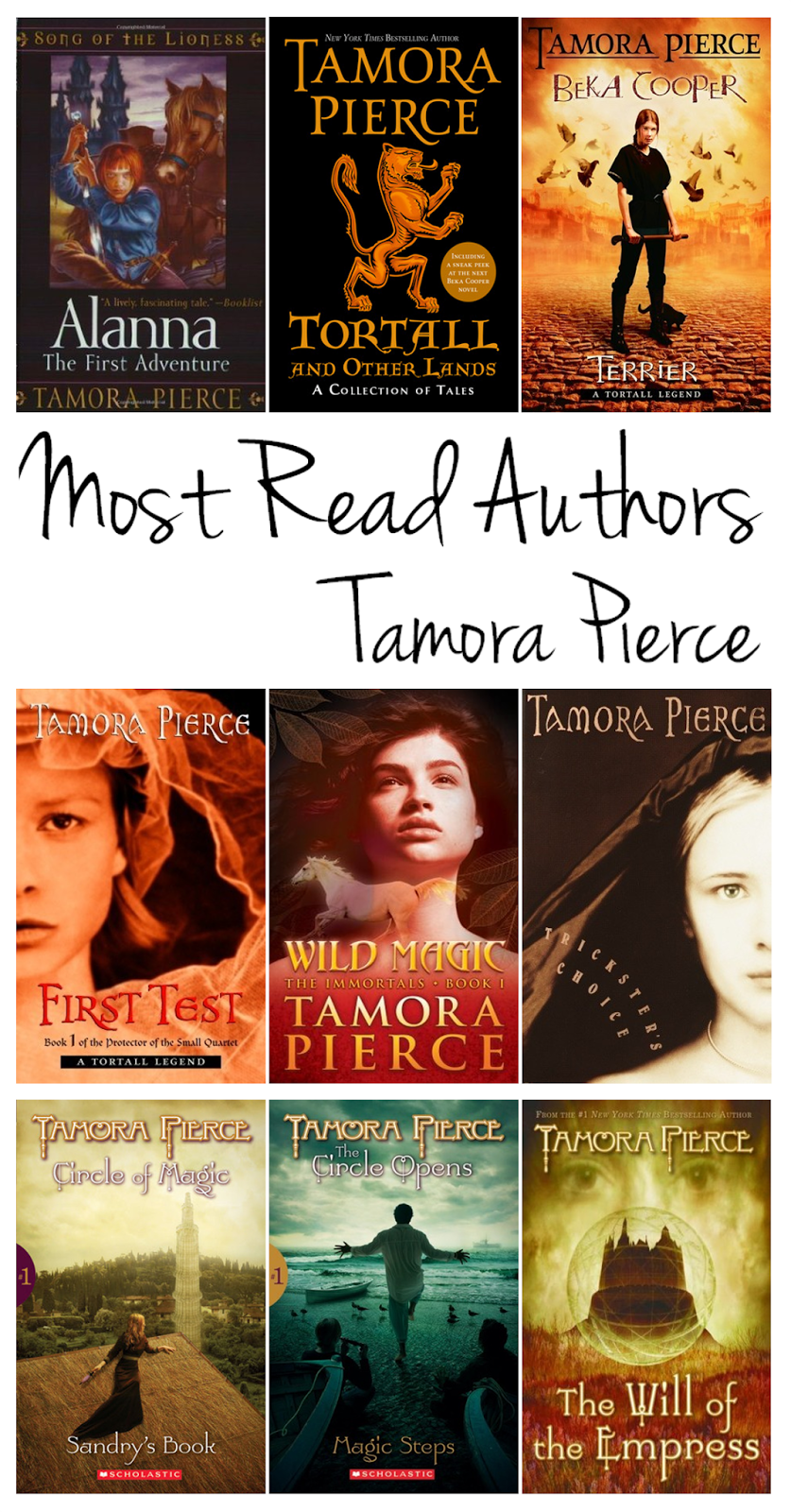 I (JoLee) didn't grow up reading Tamora Pierce. The first Alanna book, The First Adventure, was published in 1983, but I never crossed paths with it or any of Tammy's other books when I was a kid. (Truly a tragedy.) It wasn't until I was getting really into Goodreads and book blogs that I started seeing all sorts of references to Alanna. Angie at Angieville, for instance, is a huge fan and hers is really the first book blog I read regularly. This was about the time that Terrier came out, and I was hearing all sort of goods things about it, so that's where I started.

I distinctly remembering listening to Terrier while I cleaned my empty apartment after we moved all of our stuff into our new house. So, it was just me, Terrier, and the boom box I had had since high school (now no longer with us, RIP) in that empty apartment. At first, I was really confused. I didn't know who George Cooper was, and the prologue was completely lost on me, but as the book went on I got totally hooked. I loved the merging of the fantasy and detective genres. Beka Cooper is tough; she has great trainers, and the ghost pigeons are pretty darn creepy. But really, the big thing that sold me on the series was the language. Even now, when I think about this series, I get all nostalgic for Beka's distinctive voice.

Beka Cooper launched this four-year long relationship with Tammy's books. I may have mentioned a time or two how much I like listening to audio books, and how I like to listen to audio books at night when I go to bed. Well, Tamora Pierce's books became my nighttime listening. I listened to every single one on audio. (That wasn't exactly as easy as it sounds. Several of the audiobooks I had to check out through Interlibrary Loan.) I started with the Beka Cooper series in December of 2009, and I finished with Melting Stones in August 2013.

Tamora Pierce's books will forever remind me of my children's babyhood. I began Terrier just a few weeks before my oldest was born. My youngest was about 18-months old when I finished Melting Stones. Those books got me through the long nights of multiple feedings and the exhaustion of pregnancy and toddlerhood.

While I was in the midst of this four-year binge, and pregnant with my second baby, Tamora Pierce came to Baltimore. Clearly, I had to go to the signing.

It was the most intimate, lovely little book event I have ever been to. The crowd was small, so everyone had more than enough time to talk with Tammy. Also, although none of us knew each other, there was a great feel of camaraderie as we shared our stories of reading Tammy's novels. Of course, I had her sign Terrier because that is the book that started it all. (You may be noticing that I also have a book signed by Diana Peterfreund in the picture, but that, my friends, is another story.)

You may have noticed that my (Paige's) number of read Tamora Pierce books is significantly lower than JoLee's, this is because I have only read the Tortall books. My journey through Tortall began on the coattails of JoLee's, as happens with many of my favorite books. She told me about Terrier as she listened to it, specifically mentioning the slang used by Beka, and I knew I had to read it. The setting of story is vastly important to me as a reader and I knew if the book had it's own slang, the setting must be something special (I didn't know at the time that Tamora Pierce had already written four other series in the world of Tortall). I fell in love with Beka's voice, her tenacity, and her strong sense of right and wrong.

I decided to continue working my way through the books of Tortall, but I did so at the mercy of my library. I believe I ended up reading the series in this order-- the Trickster books, the Immortals Quartet, the Song of the Lioness Quartet, and the Protector of the Small quartet. It was really interesting to read the books in such a random order, but I enjoyed them immensely.

It's hard to choose just one favorite book from Tortall, but here's a few that really captured my interest. In no particular order, (1) Trickster's Choice and Trickster's Queen. I love these two books because I love Aly's spy skills and the history of the Copper Isles, and the Trickster god himself. (2) Emperor Mage is one of the few books I've read that allows you to get to know the villain along with the main character. We know Ozorn well by the end of the book. (3) Terrier is still my favorite of the Beka Cooper series. I love the Lower City as seen through the eyes of a resident instead of a noble, and Beka has such keen eyes.

Unlike JoLee, I did not listen to all the books. I listened to all the Beka Cooper books, the Trickster books, and the Immortals Quartet. I especially enjoyed listening to the Full Cast Audio versions of the Immortals Quartet, partially because Tamora Pierce narrated. It was fun to hear her voice and the interview she did at the end of the series. I often relisten to these books when I am in between audiobooks. The land of Tortall has become an old friend.