I love when I discover a series at the very beginning and ride it out to its conclusion. There's just something so satisfying and fun about knowing that you are taking the ride with the author and thousands of other readers. It's doubly exciting when the first book in a series is the author's debut novel, and the series gets hot.

I read Red Rising just before it came out, and I have this remarkable book to thank for the creation of our Connections Series. Red Rising was our very first Connections post and the reason we came up with the idea in the first place. Seeing the trilogy come to an end causes me to reflect on some of the earliest days on this blog. 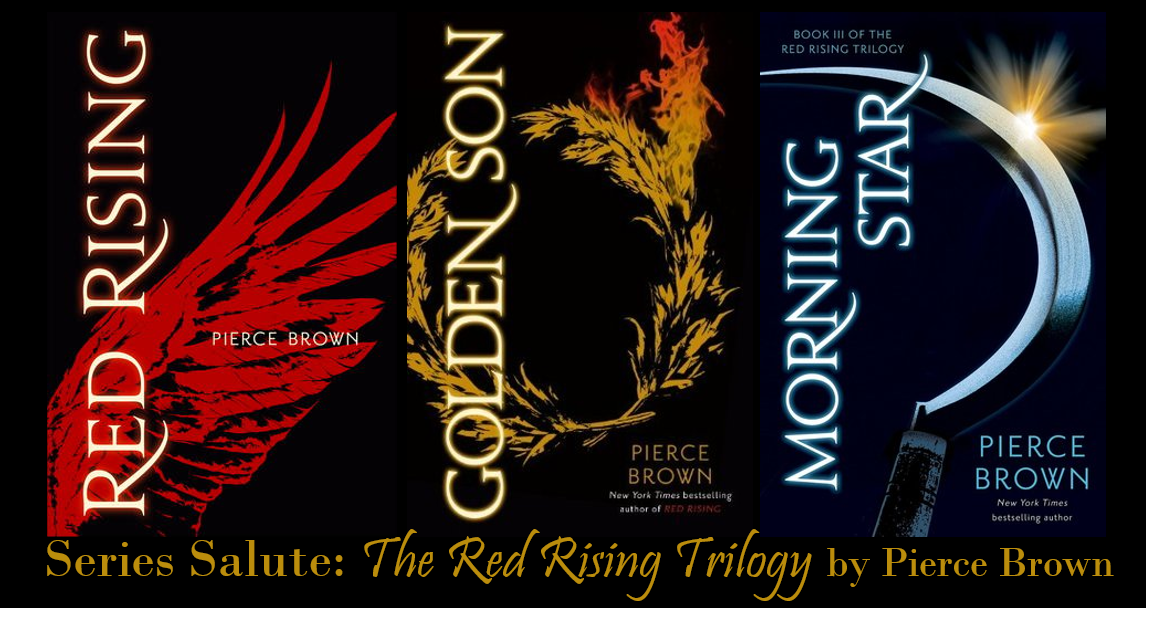 Darrow lives underground mining the material that will one day make the surface of Mars habitable for humans. But, the truth is, Mars has been habitable for hundreds of years. The Golds, the highest of the social classes, have kept this knowledge from the Reds. Darrow is chosen by a rebel Red force, transformed into a Gold, and trained to infiltrate the highest levels of government.
In Red Rising Darrow must survive the command school that trains the most elite Golds on Mars. In book two, Darrow has risen through the ranks to become a member of Augustus's guard, but life at the top is tenuous, both for Darrow and for Augustus. So much of Darrow's mission hangs on him preserving his cover, but the cost of those lies adds up. In the conclusion, Morning Star, Darrow must scramble his way back to the top after hitting rock bottom in Golden Son. He and his allies take the fight to the highest reaches of government in hopes of creating a whole new world.

I could tell from the very beginning that Pierce Brown's series had the potential to become something special. I really like all three books, but I think the first may be may favorite. A big part of that is because I can't help it, I love a good Battle School type book. The Institute is packed with twists (so many that I did not see coming) and high stakes (be prepared for violence). Darrow is young and innocent and believes his mission to be fairly black and white, but what's right and wrong gets increasingly more muddled as Darrow gets to know his Gold classmates.
As Darrow moved beyond The Institute to the larger world in Golden Son and Morning Star, I continued to be impressed with how well Pierce Brown is able to hold onto the tension that he created in the first book. The number of reversals in these books are harrowing. Things change in a breath. At one moment it seems all is lost and then Darrow has another trick up his sleeve or a bout of good fortune. There are so many moments of extreme tension in this book. Pierce Brown is so good at pouring on the anxiety.

One of the best things about the series is the about this series is the fantastic world-building. The color-coded caste system allows room for a whole range of different types of people. The Obsidians are particularly interesting. Another big influence for Brown is Roman myth and legend. The Golds, especially, are deeply indebted to Ancient Rome. And, as an amateur classicist, I absolutely love this. Other mythologies, such as those of the Norse, come into play as well. It all done in a way that is very clever and very passionate. Also, it's fun to read about characters who bounce all over the solar system from Mars to the moon to the asteroids and the gas giants.
The cast of characters in this series is immense. Huge really. They can be difficult to keep track of, but that is all par for the course when reading an epic science fiction or fantasy series. But frankly, I don't care who the other characters are as long as Darrow and Mustang are also in the scene. I just really love Darrow and Mustang together. When they are together, it feels like they can conquer the world.

Finally, I really enjoy Pierce Brown's writing style. It's somewhat stylized, and the dialog, especially, is so well done. All my favorite scenes are the quiet ones where Darrow and Mustang or Darrow and Sevro are talking. The dialog (and the great slang) makes the characters seem like they belong to another world. They are not, in any way, today's teenagers transported to space.