Pierce's Brown's debut novel Red Rising has the potential to become something big. Darrow lives underground mining the material that will one day make the surface of Mars habitable for humans. But, the truth is, Mars has been habitable for hundreds of years. The Golds, the highest of the social classes, have kept this knowledge from the Reds. Darrow is chosen by a rebel Red force, transformed into a Gold, and trained to infiltrate the highest levels of government. To do so he must first survive the command school that trains the most elite Golds.

Red Rising starts out swinging but stalls a bit in the middle; however, the last half of the book more than makes up for it. Command school is packed with twists (so many that I did not see coming), high stakes (be prepared for violence), and fabulous world-building. The vast cast of characters doesn't disappoint either, and the writing itself is impressive. What I love most is that the series is shaping up to be very complex. Darrow's mission starts out fairly black and white, but what's right and wrong gets increasingly more muddled as Darrow gets to know his Gold classmates.

Red Rising is one of those rare books that contains many classic literary themes and is simultaneously unlike anything you've ever read. Some of my connections: 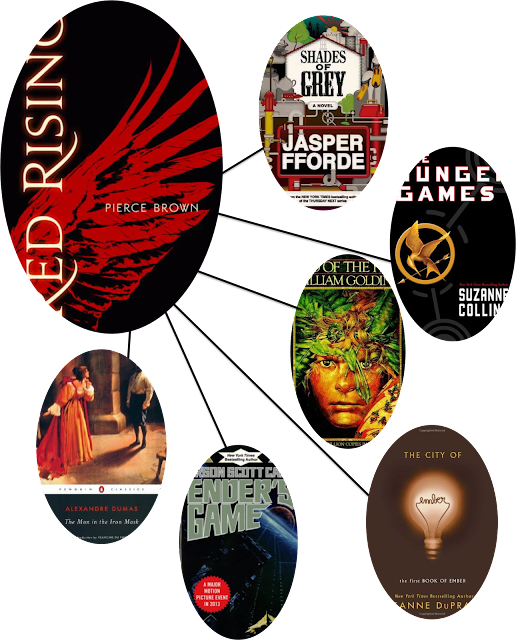 Shades of Grey and Red Rising: Class systems structured by color. I never thought I'd read about another Colortocracy.

The Hunger Games and Red Rising: A heavy Roman influence. Red Risings is more Olympian based than Empire based.

The Lord of the Flies and Red Rising: Kids must survive on their own in the wild. Sure Red Rising has proctors, but for the first half of command school they do basically nothing.

The City of Ember and Red Rising: Underground civilization unaware that people live above them on the surface.

The Man with the Iron Mask and Red Rising: Extensive training (and in Darrow's case serious surgery) to prepare the recruit to infiltrate the ruling class.

Red Rising is out now. Review copy from NetGalley.