The Story Continues: Ghostly Echoes, Ten Thousand Skies Above You, & Jillian Spectre and the Dream Weaver

It's time for some more sequels! I absolutely love the Jackaby series by William Ritter and the third in the series Ghostly Echoes was my number one most-anticipated book of the summer. It did not disappoint! I also finally got a chance to read Ten Thousand Skies Above You. I've been meaning to read that book for almost a year. It is great, and silver lining to waiting so long to read it is that I won't have to wait terribly long for the third book to come out. In keeping with the purple cover theme, I read Jillian Spectre and the Dream Weaver, another sequel I've had on my TBR pile for quite some time. It feels good to make some headway with some of these series. 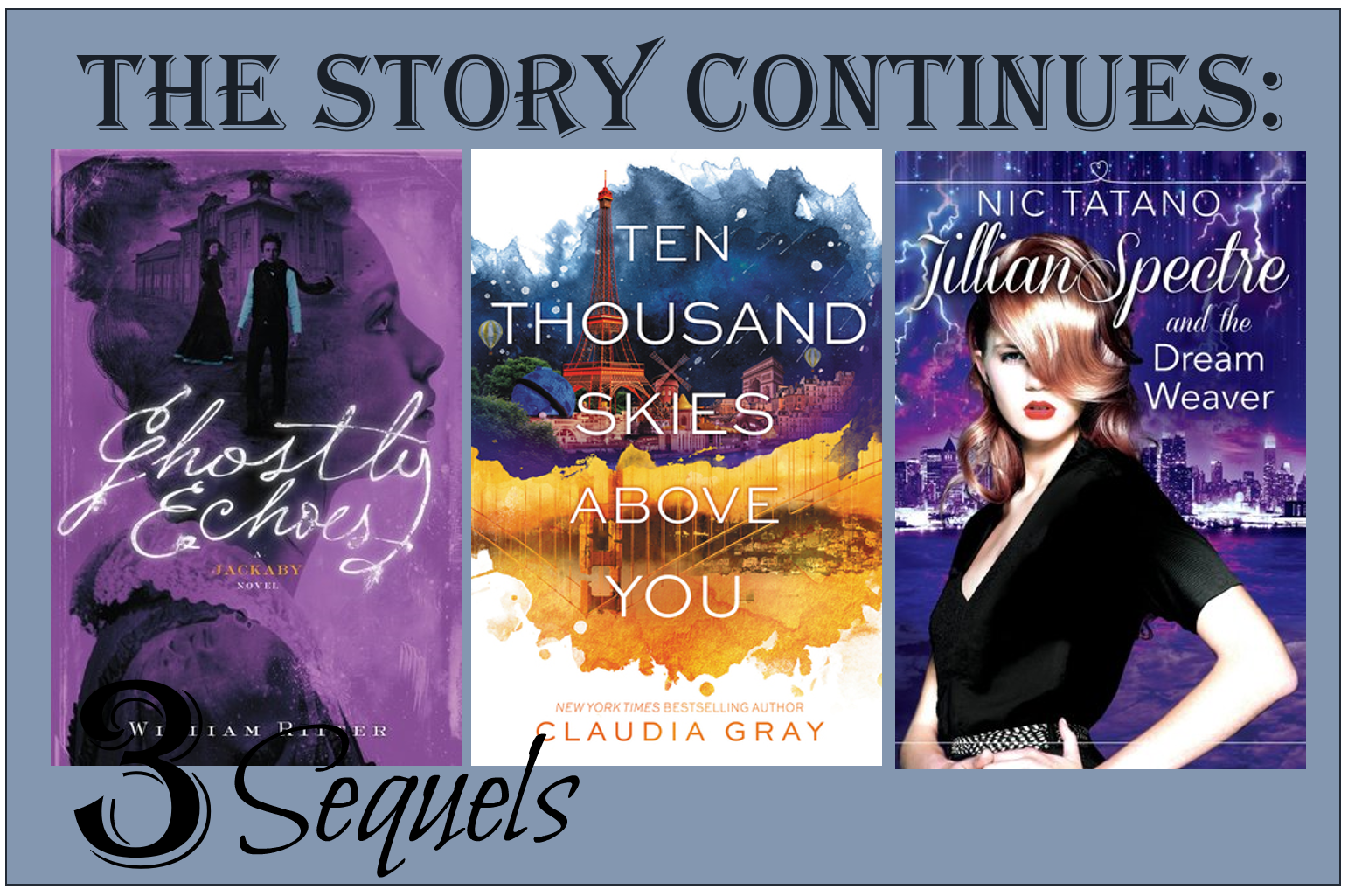 
William Ritter's Jackaby series is so much fun. I really enjoyed the first book, was completely blown away by the second book, and could not wait to get my hands on this latest installment. It was my most anticipated book of the summer.

In Ghostly Echoes we are back in New Fiddleham. Abigail Rook and Jenny Cavanaugh are on a mission to figure out what caused Jenny's death ten years ago, and if they have to go behind Jackaby's back to do it so be it. Strange things begin to happen in New Fiddleham, as they are wont to do and they echo the events of the past. Soon Jackaby and Abigail must solve Jenny's mystery or they'll meet her same fate.

It was so much fun to be back with these favorite characters. I really enjoyed all the scenes with Abigail and Jenny. Their experiments were kind of creepy, and yet the two obviously have a close bond. Ghostly Echoes definitely upped the danger and the stakes with a conspiracy that reached back a decade and up to the highest heights of New Fiddleham.

I loved finally solving the mystery of Jenny's murder and her fiancé's disappearance. I also really enjoyed the nods to Greek mythology. Book three answers many of the questions left dangling at the end of Beastly Bones.

And I'm so thrilled that there's another book forthcoming so that I'll be able to return to New Fiddleham one more time.

Ten Thousand Skies Above You by Claudia Gray

Source: Audiobook from my local library


I definitely have a soft spot for parallel reality stories. (Posts here and here and one upcoming.) I like exploring alternate realities and thinking about the consequences of decisions both big and small. I loved the first book in Claudia Gray's Firebird series and was itching to read the next installment in the series, but it just kept not happening. (I post about how Book 2 was a highly anticipated release in 2015 and a book that I meant to read in 2015 but didn't get to.)

Well, here we are September 2016, and I finally read it. And I loved it. And the silver lining of waiting so long to read this book is that I won't have to wait terribly long for book three.

Ten Thousand Skies Above You begins some months after the conclusion of the first book in the series. This jump forward in time threw me off for a bit, mostly because it had been awhile since I read the first book, and when Marguerite mentioned things that had happened in the past I was like, "Wait, did that happen in the last book because I don't remember it." Usually the event in question had not happened.

Anyway, Wyatt Conley and his Triad corporation still wish to dominate the multiverse, and after failing to get Marguerite's help through bribes Conley resorts to force. He splinters Paul's soul and will only reveal the locations where he's hidden them if Marguerite does his dirty work.

I love how complex the multiverse becomes in this book. Traveling to the different dimensions and seeing what all the main characters are doing in each one is my favorite part of this story. The end of this book is great set-up for the next in the series. I really am so eager to get my hands on it come November.

Jillian Spectre and the Dream Weaver by Nic Tatano


I really enjoyed the first book in the Jillian Spectre series. Jillian lives in the Mystic Quarter of Manhattan with her mother. The two of them can see the future. During one of her readings Jillian sees her client die and go to heaven. This moment propels Jillian toward discovering a second power, learning about her missing father, and halting an evil plot.

After the harrowing event of the past year, the arrest and containment of Jillian's criminal father, Jillian and her friends are ready to put all that behind them and enjoy their first year of college. They are just getting settled when they learn that Jillian's father's mind has been visited by another mystic. Then Jillian's dreams are invaded. Jillian and her friends are going to be put to the test once again.

I think it's a lot of fun when an author brings supernatural powers into the real world, and Nic Tatano's paranormal world is a lot of fun. The powers that he's given his characters are interesting. Most of all, I love how the friends are stronger when they work together. The forces working against them know this too, and boy to do they work hard to tear the group apart.

While there are some really evil adults in this book, Jillian continues to benefit from some great adult role models. I definitely appreciate that. I was however, a little disappointed with how fixated the group seemed to be on good looks and outward appearances. At times they came across as a bit shallow and definitely used the word "slut" way too often for my taste.

The story itself is great. It's a quick read but it's filled with twists and surprises.


All books reviewed by JoLee.
Posted by JoLee at 9:26 AM