We are giving away 3 finished copies of The Swan Riders. Enter the giveaway below, follow the tour, and read why I loved this book so much. However, be aware that there are spoilers for the first book in my review. Believe me, they could not be avoided. 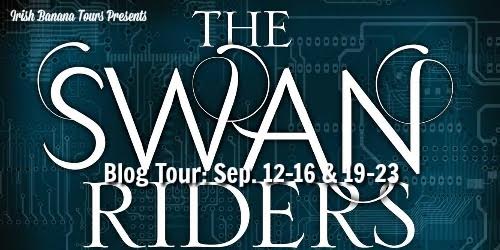 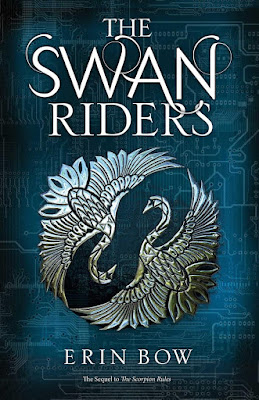 The Swan Riders by Erin Bow

Series: The Prisoners of Peace


Greta Stuart had always known her future: die young. She was her country's crown princess, and also its hostage, destined to be the first casualty in an inevitable war. But when the war came it broke all the rules, and Greta forged a different path.

She is no longer princess. No longer hostage. No longer human. Greta Stuart has become an AI.

If she can survive the transition, Greta will earn a place alongside Talis, the AI who rules the world. Talis is a big believer in peace through superior firepower. But some problems are too personal to obliterate from orbit, and for those there are the Swan Riders: a small band of humans who serve the AIs as part army, part cult.

Now two of the Swan Riders are escorting Talis and Greta across post-apocalyptic Saskatchewan. But Greta’s fate has stirred her nation into open rebellion, and the dry grassland may hide insurgents who want to rescue her – or see her killed. Including Elian, the boy she saved—the boy who wants to change the world, with a knife if necessary. Even the infinitely loyal Swan Riders may not be everything they seem.

Greta’s fate—and the fate of her world—are balanced on the edge of a knife in this smart, sly, electrifying adventure.

Last year I fell in love with two sentient Artificial Intelligences. The first was Talis, the AI who rules the world in Erin Bow's post-apocalyptic Prisoners of Peaces series. Talis and the other AIs were my absolute favorite part of the first book in the series, The Scorpion Rules. Talis is enigmatic, scary, and weirdly fascinating. In many ways he is a complete contradiction. He's a robot but he has a bit of humanity. He's a machine but also nearly a god. He's all powerful but not invincible. He has his own set of (questionable) morals. (The other AI I fell for last year, by the way, was AIDAN from Illuminae.)

At the end of The Scorpion Rules Greta casts her lot with the AI which means additional challenges and danger for her, but it also meant that in the sequel I would be able to spend all my time with the AI. Sorry Greta, but I couldn't be happier.

The Swan Riders begins just after The Scorpion Rules left off. Greta is now an AI, and she must travel with Talis and two of his Swan Riders back to Talis's headquarters in the Red Mountains. It is a very dangerous journey, both because of Greta's precarious state as a new AI and because the events of The Scorpion Rules have inspired outright rebellion.

I was completely floored by The Swan Riders. I liked it so much. Basically, The Swan Riders built upon all the things that I loved most about the first book in the series. (Namely the AI and all their complexities.) Although, let me issue a warning: If Greta's relationship with Xie was your favorite thing about The Scorpion Rules you should go in knowing there's not going to be much progress there. Personally, every once in a while I find it really refreshing to read a book where romance is not a major player, and, in The Swan Riders it's much more realistic to set that relationship on the back burner now that Greta is an AI.

The Swan Riders, from which this book takes its name, are the young people who serve Talis. They are part army and part cult. I found them to be quite fascinating, and the Swan Riders we got to know well over the course of the novel burrowed their way into my heart.

I have always loved Erin Bow's writing style. She writes with a lovely smooth cadence that I find so soothing. This is not a fast-paced story, but a slower pace has never put me off a book, and believe me there are many surprises.

Finally, The Swan Riders is glorious complicated. The enigma of the AI is only intensified in this second installment. The line between human and machine becomes even fuzzier. All the relationships in this novel are extremely complex. There are so many levels of love and devotion and what exactly that means when one is dedicated to a godlike AI. Honestly, some of it was so heartbreaking. I was quietly wiping away tears at the end of this book. 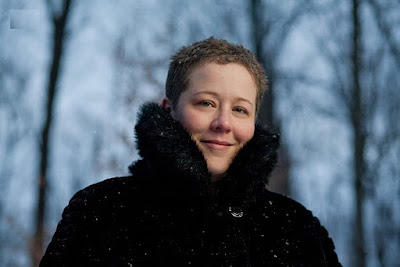 Hi! My name is Erin Bow -- physicist turned poet turned author of young adult novels that will make you cry on the bus. I'm a white girl, forty-something, feminist, geeky enough to do the Vulcan salute with both hands -- in public. I live in Canada. I love to cook, hate to clean, and yes, I do own a cat.

In the beginning, I was a city girl from farm country -- born in Des Moines and raised in Omaha -- where I was fond of tromping through wood lots and reading books by flashlight. In high school I captained the debate team, founded the math club, and didn't date much.

In university I studied particle physics and worked briefly at the European Centre for Nuclear Research (CERN) near Geneva, Switerland. Physics was awesome, but graduate school kind of sucked, and, at some point, I remembered that I wanted to write books.

Books: I have six of them -- three novels, two volumes of poetry, and a memoir (the poetry under my maiden name, Erin Noteboom). My poetry has won the CBC Canadian Literary Award and several other awards. My two novels, Plain Kate and Sorrow's Knot, also have a fistful of awards, including Canada's top award for children's literature: the TD. The third novel, The Scorpion Rules, still faces its award season. No one read the memoir.

Right now I'm looking forward to the publication of my fourth novel, a companion piece to The Scorpion Rules called The Swan Riders, which will be out September 20th from Simon & Schuster. I'm at work on an entirely different novel and a book of poetry about science.

Did you notice I got to Canada in there somewhere? Yeah, that was true love. I'm married to a Canadian boy, James Bow, who also writes young adult novels. We have two small daughters, both of whom want to be scientists.