I am joining a bunch of lovely bloggers for a Roald Dahl Birthday Blog Tour Extravaganza! (Thanks Hannah from Irish Banana Tours and Brianna from Wunderkind PR) Why all the fanfare? Well, it was Roald Dahl's 100th birthday on September 13th, and I can't think of a better way to celebrate the author who brought so much joy to so many childhoods (including mine) than by reading or rereading his beloved books.

I feel like I've got a very special spot on the tour schedule because I'm featuring a brand new book all about Roald Dahl's life. Love From Boy: Roald Dahl's Letters to His Mother is a collection of never-before-published letters from Roald Dahl to his mother that was published in celebration of Dahl's 100th birthday. 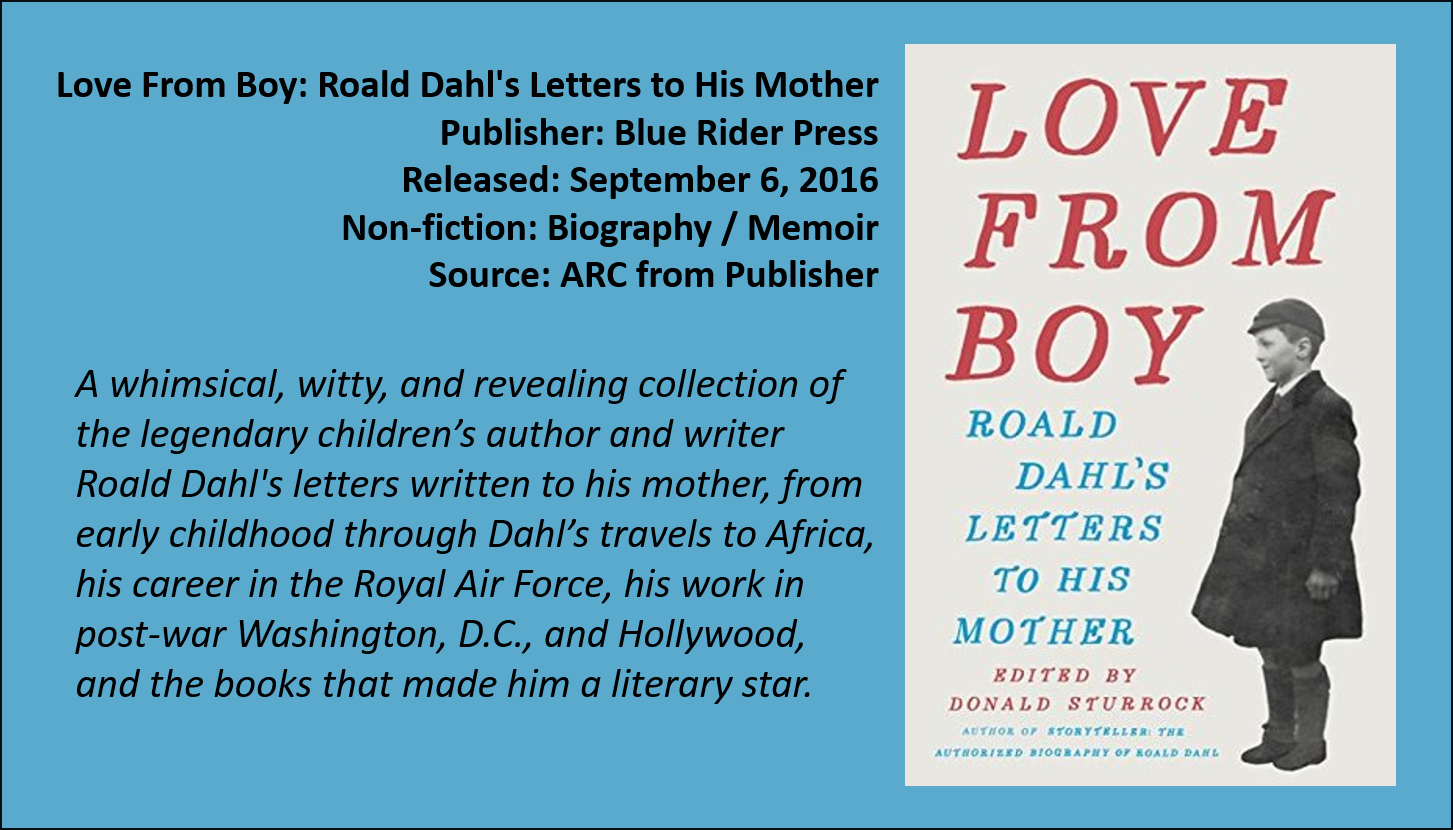 
Roald Dahl's autobiographical books, Boy: Tales of Childhood and Going Solo, are my absolute favorite Roald Dahl books. (And honestly some of my favorite books ever.) So, when I heard about this new collection of letters set to be published in conjunction with Dahl's 100th birthday on September 13th, I knew I wanted to read it.

Dahl wrote to his mother consistently from the time he left for boarding school at age nine until her death four decades later. Assembled by Dahl's authorized biographer, Donald Sturrock, the letters offer a glimpse into the famous author's life and his relationship with his mother.

Because I already was such a big fan of Dahl's autobiographies, I knew that he had lived a fascinating life. And, it was interesting to see what he relayed to his mother at each stage (and what he left out). I also enjoyed seeing the events from Dahl's eyes in real time (or thereabouts).
As one would expect with letters, I found some to be more interesting than others, and I think different people will be drawn to different aspects of the great author's life. Many of Dahl's letters from boarding school were sweet and funny (if not altogether honest), and it was interesting to read about how the young Dahl began to take an interest in things that I knew would interest him for his entire life, such as photography and sports. I would have loved to read more letters about Dahl's short time in Africa as a Shell employee. Every one of the letters Dahl wrote during his time with the RAF during World War II was absolutely fascinating. Dahl basically skips over his time in Iraq in Going Solo, but I thought the letters from the training camp there were some of the best. Even with the censors at work, it was interesting to read about Dahl's training, his love of flight, and his plane crash.

The letters I enjoyed most were the ones that Dahl wrote to his mother while he was working in Washington, D.C. during the war. It was so interesting to hear about his work with famous people, such as the Roosevelts and Walt Disney. Also, during this time, Dahl really became serious about writing, and I liked reading about this transformation.

Donald Sturrock's chapter introductions are every bit as interesting and informative as the letters themselves. Sturrock sets the stage well for each group of letters, putting them in context in terms of both world events and Dahl's personal life. Sturrock also identifies life events that influenced Dahl's later writing, such as how boarding school informed Matilda and flying airplanes informed James and the Giant Peach.

More than anything, Love from Boy made me want to reread Boy: Tales of Childhood and Going Solo. In fact, I convinced my book club that we should read them both for our September meeting in celebration of Roald Dahl's 100th birthday!


Check out the rest of the bloggers on the tour, see what they

have to say about your favorite Roald Dahl books. 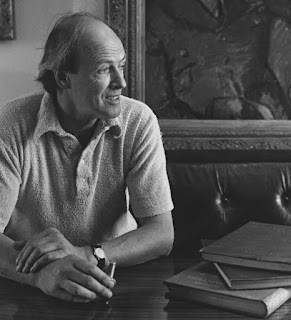 Roald Dahl (1916–1990) was one of the world’s most imaginative, successful and beloved storytellers. He was born in Wales of Norwegian parents and spent much of his childhood in England. After establishing himself as a writer for adults with short story collections such as Kiss Kiss and Tales of the Unexpected, Roald Dahl began writing children's stories in 1960 while living with his family in both the U.S. and in England. His first stories were written as entertainment for his own children, to whom many of his books are dedicated.

Roald Dahl’s first children’s story, The Gremlins, was a story about little creatures that were responsible for the various mechanical failures on airplanes. The Gremlins came to the attention of both First Lady Eleanor Roosevelt, who loved to read the story to her grandchildren, and Walt Disney, with whom Roald Dahl had discussions about the production of a movie.

Roald Dahl was inspired by American culture and by many of the most quintessential American landmarks to write some of his most memorable passages, such as the thrilling final scenes in James and the Giant Peach - when the peach lands on the Empire State Building! Upon the publication of James and the Giant Peach, Roald Dahl began work on the story that would later be published as Charlie and the Chocolate Factory and today, Roald Dahl’s stories are available in 58 languages and, by a conservative estimate, have sold more than 200 million copies.

Roald Dahl also enjoyed great success for the screenplays he wrote for both the James Bond film You Only Live Twice in 1967 and for Chitty Chitty Bang Bang, released one year later, which went on to become a beloved family film.  Roald Dahl’s popularity continues to increase as his fantastic novels, including James and the Giant Peach, Fantastic Mr. Fox, Matilda, The BFG, and Charlie and the Chocolate Factory, delight an ever-growing legion of fans.

The second charity, The Roald Dahl Museum and Story Centre – a unique cultural, literary and education hub – opened in June 2005 in Great Missenden where Roald Dahl lived and wrote many of his best-loved works. 10% of income from Roald Dahl books and adaptations are donated to the two Roald Dahl charities.

On September 13, 2006, the first national Roald Dahl Day was celebrated, on what would have been the author’s 90th birthday. The event proved such a success that Roald Dahl Day is now marked annually all over the world. September 13, 2016 is Roald Dahl 100, marking 100 years since the birth of the world’s number one storyteller. There will be celebrations for Roald Dahl 100 throughout 2016, delivering a year packed with gloriumptious treats and surprises for everyone.