This whole blog is kind of like a long-distance book club, but sometimes we like to take it a step further by reading the same book at the same time. This time we tackled Erin Bow's newest novel, The Scorpion Rules.

Our review was developed from our discussion of The Scorpion Rules. Below the review we've provided a list of questions that you can use to discuss The Scorpion Rules in your book club, long-distance or otherwise. 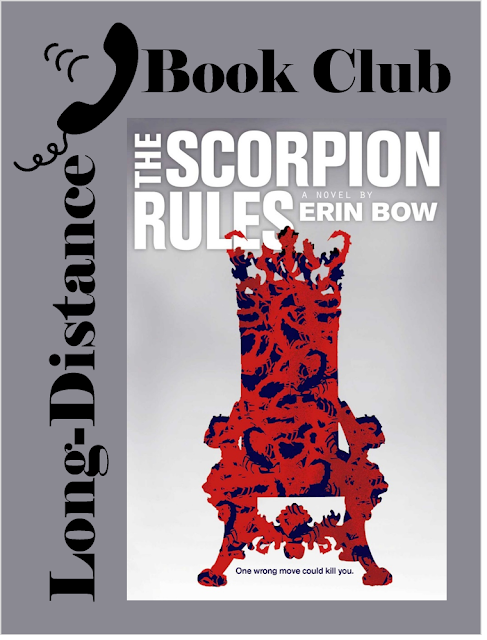 The Scorpion Rules is the first book by Erin Bow that Paige has read, and she liked it quite a lot. I, on the other hand, had a more mixed reaction. I think my hesitations come mostly from the great expectations I held for a new book by Erin Bow. Plain Kate is universally praised, and Sorrow's Knot, you guys. It is magnificent. If you are looking for a ghostly story to read this Halloween and haven't yet read it, well, you know what I'd recommend. Anyway, so I was eager to see what Erin Bow would do with a dystopia/ post-apocalyptic setting.

Paige and I both quite enjoyed the overall premise of The Scorpion Rules. It takes place in the distant future after humanity has nearly decimated itself thanks to global warming and warfare over scare resources. The savior of mankind, said with a grain of salt, is an amoral Artificial Intelligence named Talis. To maintain peace Talis requires the heir to each nation be raised in his Preceptures where they will be educated and used as hostages. Any country at war, whether the initiator or not, forfeits the life of their children. Greta Gustafsen Stuart, Duchess of Halifax and Crown Princess of the Pan-Polar Confederation is a Child of Peace and our narrator. With her country on the brink of war, she's knows survival is unlikely.

Paige and I were both fascinated by Talis, and the AIs in general, in The Scorpion Rules. Talis is enigmatic, scary, and weirdly fascinating. In many ways he is a complete contradiction. He's a robot but he has a bit of humanity. He's a machine but also nearly a god. He's all powerful but not invincible. He has his own set of morals. I loved all the Utterances sprinkled throughout. These are Talis's sayings and they have the air of holy writ, but they are also so snarky and full of pop culture references.

Family is a central theme in the book, and Paige and I spent a lot of time talking about the different types of "families" in this post-apocalyptic world. Blood binds, of course, but also we see adopted families between both the children and the AI. What one would do for family or what one cannot do for family is central.

I was at a diversity panel last week and one of the panelists said something along the lines of, "if your apocalypse kills off all the people of color then you have a problem." Based on some of the other things she said I don't know if she'd give this book her full stamp of approval, but, on the plus side this is a diverse group with children from all over the world. I really liked seeing how the different cultures came together in the Precepture.

So how did Erin Bow do with a post-apocalyptic setting? She created a really fascinating world.

Discussion Questions for The Scorpion Rules by Erin Bow:

The Scorpion Rules was out September 22nd, 2015

Review copy from Edelweiss.
Posted by JoLee at 11:20 AM