Highly Anticipated Releases for the Second Half of 2016

We're linking up with The Broke and the Bookish for Top Ten Tuesday. Today is a freebie day, so we took the opportunity to caught up on a topic we missed.

Aack! It is going to be a busy few months of reading. (But really when is it not?) Putting together this list was in some ways really easy because I've been dying to get my hands on some of these books for a long, long time now. But, at the same time, it was so hard to narrow it down! What books are you itching to get your hands on?

The big one that is missing from this list is Harry Potter and the Cursed Child. I debated whether or not I wanted to include it. It seems like an obvious pick, but I feel a little nervous about the addition to the Harry Potter Universe. Am I the only one?

UPDATE: The publication date for Laini Taylor's Strange the Dreamer has been pushed back to March 28, 2017. You can bet it'll be in my Highly Anticipated Releases for the first half of 2017. 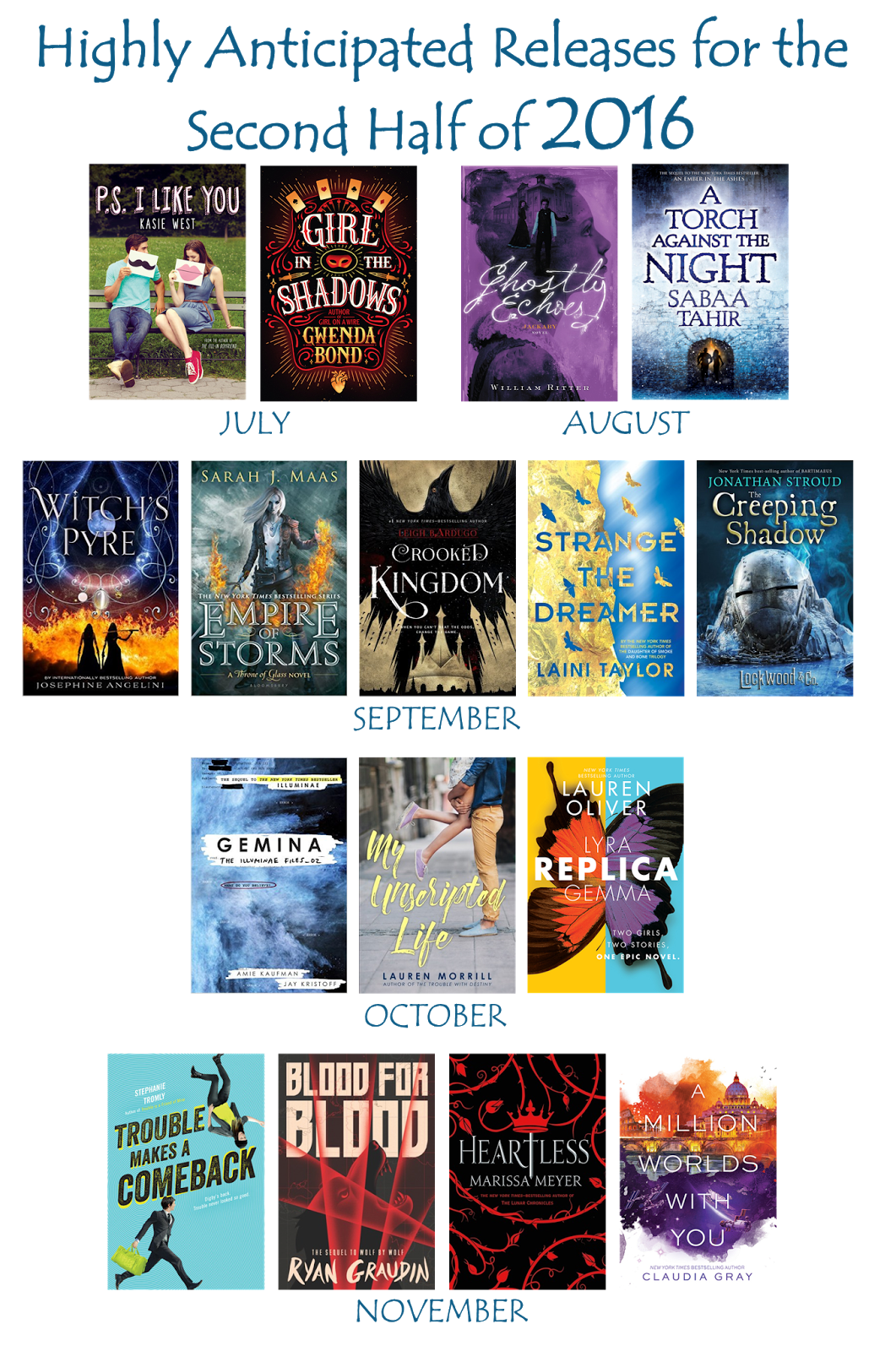 P.S. I Like You by Kasie West:
A new YA contemporary by my current book crush. Yes, please. P.S. I love you, Kasie West.

Girl in the Shadows by Gwenda Bond:
This is a companion novel to Girl on a Wire, a book I quite liked. I'm eager to revisit Cirque American.

Ghostly Echoes by William Ritter:
I think people may be getting tired of me talking about this book already, and I haven't even read it yet. Ghostly Echoes is the sequel to Jackaby and Beastly Bones. It's my most anticipated book of the summer.

A Torch Against the Night by Sabaa Tahir:
An Ember in the Ashes was just crying out for a sequel. Here's hoping it's great.

Witch's Pyre by Josephine Angelini:
I find this series so addicting. I'm counting down the days until I can download the audio book.

Empire of Storms by Sarah J. Maas:
It wouldn't be September without the next installment in Celaena's story.

Crooked Kingdom by Leigh Bardugo:
I finally read Six of Crows in April. And that means I haven't had to wait quite as long for the sequel.

Strange the Dreamer by Laini Taylor:
The Daughter of Smoke and Bone trilogy is one of my favorite fantasy series. I'm so excited to see what Ms. Taylor does next.

Creeping Shadows by Jonathan Stroud:
If you've been around the blog for awhile (or if you know me at all) you know that I am obsessed with the Lockwood & Co. series. I've foisted this series on a number of well-meaning friends.

Gemina by Amie Kaufman and Jay Kristoff:
Illuminae is another book that I could not stop talking about. I've been pining for the sequel.

My Unscripted Life by Lauren Morrill:
There is a shocking lack of contemporary novels on this list, but I'm always up for a celebrity/ normal person romance.

Trouble Makes a Comeback by Stephanie Tromly:
I read Trouble is a Friend of Mine earlier this year and fell in love. I'm so happy that there is a sequel!

Blood for Blood by Ryan Graudin:
I read Wolf by Wolf in one day last year and have been dying to find out what happens next ever since.

A Million Worlds With You by Claudia Gray:
How is it that each of these covers is more beautiful than the last?
Posted by JoLee at 8:55 AM