We're joining up with The Broke and the Bookish gals today for Top Ten Tuesday. 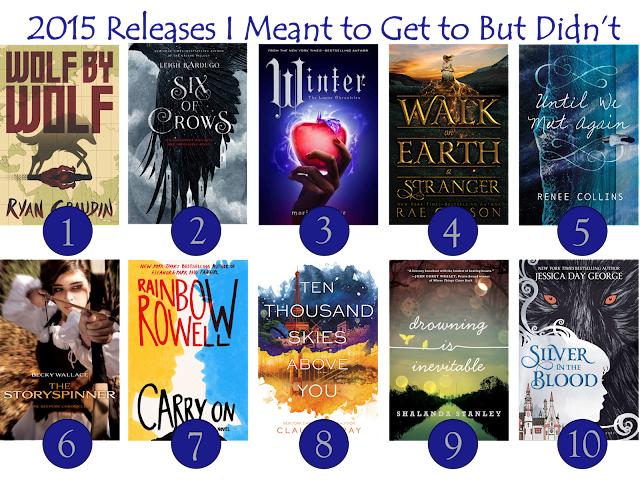 Wolf By Wolf by Ryan Graudin:
This is one 2015 release that I have managed to already read in 2016. I quite enjoyed this fast-paced alternate history where Hitler won World War II.

Six of Crows by Leigh Bardugo:
So, I'm not a big fan of the Grisha Trilogy. I only read the first in the series, but after several trusted friends raved about this one (and friends who didn't necessary like the Grisha Trilogy, by the way), I decided I had to read it.

Winter by Marissa Meyer:
This was my most anticipated release of 2015, but it took me forever to get a copy. I actually started it in 2015 on Christmas Day and finished it a few days into 2016. So it's another one I can check off this list.

Walk on Earth a Stranger by Rae Carson:
I have plans for this book in the coming in the next month. I'm so looking forward to finally reading it.

Until We Meet Again by Renee Collins:
This book came out in November, right near the end of the year. You know I'm always in for a blue time travel novel, and this one is high on my list. It's slotted for a post in February.

The Storyspinner by Becky Wallace:
I heard great things about Becky Wallace's debut, and I really wanted to read it. Now that I've got an advanced copy of the sequel, that desire is even more pressing.

Carry On by Rainbow Rowell:
I loved Fangirl so much. How could I skip this one? I just haven't quite gotten to it yet.

Ten Thousand Skies Above You by Claudia Gray:
Here's another one that came out late in the year. I wanted to pick it up right away, but it got pushed to the side to make way for other projects, which seems to still be its lot despite the fact that I really want to read it!

Drowning is Inevitable by Shalanda Stanley:
I didn't get around to reading this debut in 2015, but I'm going to make it happen this year. That cover is just too lovely to ignore.