Maybe this is not the time to make this post, but, on the other hand, I can't stop thinking about all the many, many books I've read that feature plagues and pandemics. So maybe it's the perfect time to post this. For reasons that I don't entirely understand books featuring a rampant illness are totally my type of thing. A plague works so well in every type of genre from historical fiction to science fiction. Here are some of my favorites grouped by genre. Now if only we could get this pandemic to stay where it belongs: in a book. 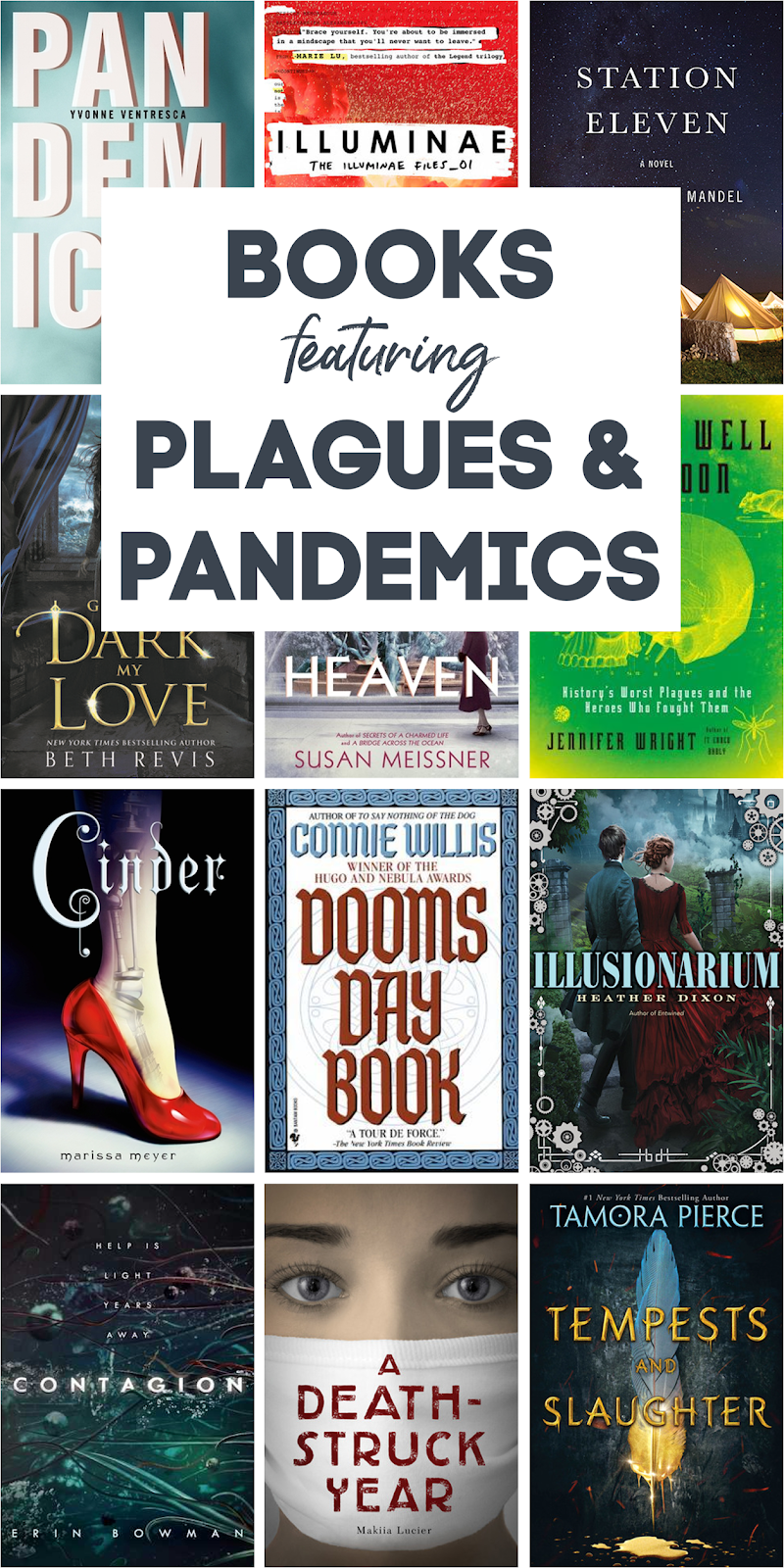 
Get Well Soon by Jennifer Wright
Each chapter in this book discusses a different devastating plague from history from the bubonic plague to polio. This is the book that made me realize I had a thing for pandemics in literature. As I read it I realized I had read books about so many of these diseases along with dozens of books featuring plagues in speculative fiction.

The Ghost Map by Steven Johnson
Johnson tells the story of the London cholera epidemic of 1854 and how two men, Reverent Henry Whitehead and Dr. John Snow, solved the mystery of how cholera spreads. What I loved most about this book is how it lays out for the readers the connections between what could be mistaken as unrelated facets of history.

Terrible Typhoid Mary by Susan Campbell Bartoletti
Mary Mallon was an Irish immigrant who worked as a cook in New York City in the early 1900s. She was also a healthy typhoid carrier. Bartoletti takes the reader beyond the tabloid headlines and sheds light on the beginnings of a public health system in the United States. (featured here)


As Bright As Heaven by Susan Meissner
This book is set in Philadelphia during the 1918 flu pandemic (a hot topic now if ever there was one).
The Bright family is new in town, and the father is training to take over his great-uncle's funeral home business. It's quite the set-up: Philadelphia, WWI, Spanish Influenza, in a funeral home.  (featured here)

A Death-Struck Year by Makiia Lucier
This book follows 17-year-old Cleo Berry as her life is completely turned upside down when the Spanish Influenza hits Portland. Cleo has never really known what she wants to do with her life, but the influenza suddenly gives her a sense of purpose when she volunteers with the Red Cross. (featured here)

Doomsday Book by Connie Willis
Time-traveling historian, Kivrin, is the first historian to ever travel to the Middle Ages, and it's a rough journey. This book features two epidemics: the bubonic plague of the 1300s and an epidemic in Kivrin's present day. I love Connie Willis's Oxford Time Travel Series and absolutely devoured this book.

Year of Wonders by Geraldine Brooks
Anna lives in a little town in Northern England. In 1665 a bolt of cloth infested with plague-carrying fleas is delivered to the village from London. The town members commit to self-imposed quarantine so that the disease will not spread. In less than a year more than half of the village has succumbed to the plague.

The Plague by Albert Camus
Technically this one should probably be categorized as contemporary fiction, as it was contemporary when it was written. In the 1940s the plague ravages a coastal town in Northern Africa. I read this book in college and absolutely loved it. That should have been my first clue that I'm all in for books about plagues and epidemics.


Give the Dark My Love by Beth Revis
Nedra Brysstain has been awarded a scholarship to the prestigious Yugen Academy where she plans to study medicinal alchemy. Nedra's studies are frantic; a deadly disease is sweeping across her island home, and her only hope is to find a cure. This fantasy is deliciously creepy, and things really take a turn toward the dark side about halfway through. (featured here)

Tempests and Slaughter by Tamora Pierce
This newest book in Pierce's Tortall universe follows the training of the young Arram Draper whom we first met in the Immortals series as Numair. Arram is the youngest student to ever enter the Imperial University of Carthak. Much of the book follows Arram's day-to-day life: going to school, hanging out with his two best friends, Ozorne and Varice, dealing with unexpected magical occurrences, navigating the demands of Carthak society, and working to quell a deadly plague. (featured here)

Briar's Book by Tamora Pierce
Tempest and Slaughter is the second book by Pierce to feature a deadly plague. In the fourth (and unsurprisingly my favorite) of the Circle of Magic series the crew is up against a deadly, new plague. Briar and Rosethorn discover this plague and are trapped in quarantine for a time. Everyone has to pitch to help find a cure. Basically the story goes from one harrowing situation to the next.

Illusionarium by Heather Dixon
In an alternate nineteenth-century Britain, known as Arthurise, a deadly illness that only strikes down women is devastating the nation. The main character, Jonathan, is a medical student who serves as an apprentice to his father, the country's second-best surgeon. This book is a steampunk, parallel reality tale with a little bit of horror thrown into the mix. It's creepy, fascinating, and other-worldly but not without innocence and hope, as well. (featured here)

Station Eleven by Emily St. John Mandel
This book is set in a post-apocalyptic world where the majority of the population has died off from a virulent flu. The narration moves between post-pandemic and pre-pandemic, and it takes awhile to understand how the two sides of the story fit together. What I really loved about this book is the way that art is so essential to human existence even when individuals are fighting just to survive. (featured here)

Cinder by Marissa Meyer
This book is a sci-fi retelling of Cinderella set in a post World War IV world that is threatened by both a terrible pandemic and the Lunar Queen. Cinder is an orphan and a cyborg and a bit of an outcast, but she is also a famous mechanic which brings her to the attention of Prince Kai (he doesn't know about the cyborg part). Cinder finds herself unwillingly involved in interspatial politics. I love this whole series. (featured here)

Pandemic by Yvonne Ventresca
Fifteen-year-old Lilianna has lived through a traumatic event, and she is struggling with some paranoia as she attempts to rebuild her life. Then, while her parents are away on business, a deadly influenza sweeps up the east coast of the United States. Lil is alone and her worst fears have come true. Of all the books on this list, this one is probably the most realistic. (featured here)


Illuminae by Amie Kaufman and Jay Kristoff
The year is 2575 and Kady and Ezra's planet has just been invaded by a rival corporation. The harrowing escape to the evacuation ships is just the beginning. Soon one of the ships is suffering from a deadly plague, and the AI that runs the ship is damaged and possibly deranged. This is a harrowing and fantastic ride. I highly recommend the whole series. (featured here)

Contagion by Erin Bowman
A small crew travels to a sparsely populated mining colony on a nearby planet after receiving a distress call. It appears everyone on the planet has died from a strange and distressing plague. This book is a sci-fi/ horror mash-up, and I always love a good genre-bender. (featured here)

Dread Nation by Justina Ireland
Jane McKeene lives in a world where a zombie plague ended the Civil War. Slavery is outlawed, but a new strict caste system places blacks and indigenous peoples on the front lines as zombie hunters while white folks get to pretend that everything is fine. This book is both incredibly thought-provoking and entertaining, which is, I think, exactly what you want from an alternate history scenario. (featured here)

The Girl with All the Gifts by M.R. Carey
Melanie is a bright and eager student. She is also living in a world where a dreadful disease has turned most of the population into zombies. While perhaps not all zombie books belong on this list, this one definitely does because there is a great deal of time spent on investigating the causes of the infection and working towards a cure.