Highly Anticipated Book Releases for the First Half of 2020

I'm a little late on this post because, well, it was so hard to decide what books to include. January, especially, had so many great books coming out that it was such a challenge to limit it to five. Somehow I managed, and here we are with the my most highly anticipated releases for the first half of 2020. 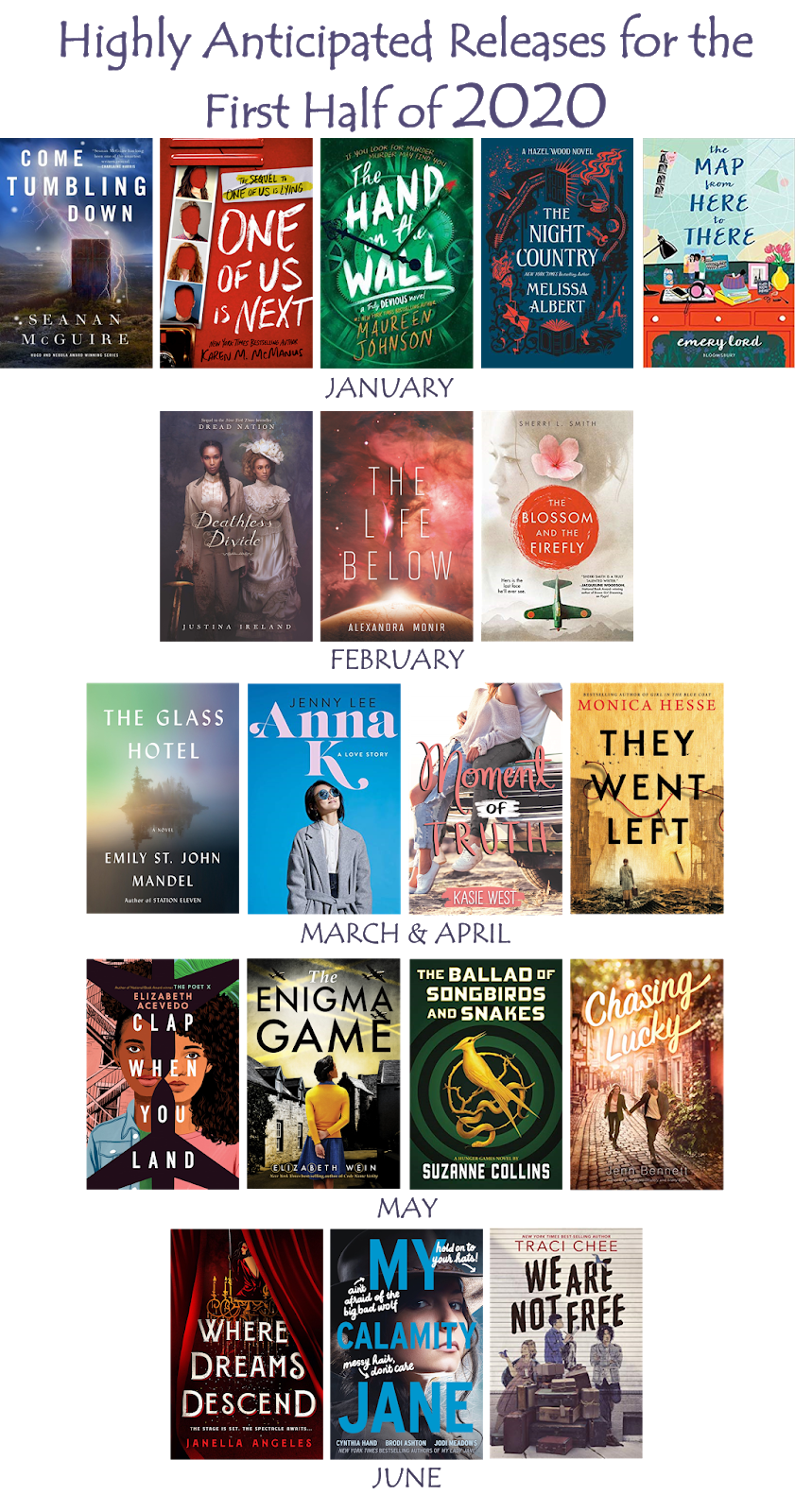 Come Tumbling Down by Seanan McGuire
Every January I look forward to the newest Wayward Children book. I love how Seanan McGuire takes us to so many fantastical worlds.

One of Us is Next by Karen M. McManus
This book is a sequel to One of Us is Lying, which I really enjoyed. I'm just about finished with this book, and it's a nice follow-up.

The Hand on the Wall by Maureen Johnson
The final book in the Truly Devious series. I can't wait to see how it all plays out. (first book in the series featured here)

The Night Country by Melissa Albert
And, speaking of sequels, I loved The Hazel Wood, and I'm eager to see where the story goes. (series featured here)

The Map from Here to There by Emery Lord
Well, at this point, it's clear that January is all sequels. I wasn't expecting to get a sequel to The Start of Me and You, but I am not complaining. Not one bit. (series featured here)

Deathless Divide by Justine Ireland
The first book in this series, Dread Nation, was so good. I love a well-done alternate history, and this one has zombies and zombie hunters. (series featured here)

The Life Below by Alexandra Monir
I was so surprised by how much I liked The Final Six. I need to know what happens now that the six are off to space.

The Blossom and the Firefly by Sherri L. Smith
This book is the first of the World War II books on this list. There are several YA World War II stories coming out this year that look especially good. This one is about a kamikaze pilot and the girl he loves. (Sherri Smith's Flygirl featured here)

Anna K.: A Love Story by Jenny Lee
This book is a retelling of Anna Karenina that's been described as a mix between Crazy Rich Asians and Gossip Girl. I'm intrigued.

Moment of Truth by Kasie West
Now that I'm all caught up on Kasie West's backlist, I need her next book.

They Went Left by Monica Hesse
The second World War II book on this list, and Monica Hesse's third foray into WWII historical fiction. I'm a huge fan of Girl in the Blue Coat, and I'm eager to go back to the WWII era with her.

Clap When You Land by Elizabeth Acevedo
It's Elizabeth Acevedo. That's all that needs to be said. But, if you need more convincing, this book involves two sister who didn't know the other existed until their father's death.

The Enigma Game by Elizabeth Wein
Elizabeth Wein is a master of historical fiction, and I can't wait to be back in her capable hands. Also, it looks like we'll be seeing some familiar characters from the Code Name Verity series in her new book. (series featured here, here, and here)

The Ballad of Songbirds and Snakes by Suzanne Collins
Returns to long-ended series make me just a bit nervous, but I'll admit that I am ready to go back to the world of The Hunger Games.

Chasing Lucky by Jenn Bennett
I love Jenn Bennett's contemporaries (featured here and here). They always make for the perfect summer read, and I'm thrilled to have one to put on my summer reading this again this year.

Where Dreams Descend by Janella Angeles
I don't know much about this one except that it revolves around a magical circus, and that's enough to get me interested. (Circus setting here and here)

My Calamity Jane by Brodi Ashton, Cynthia Hand, and Jodi Meadows
I love the Lady Janies, and I'm ready to head to the wild west with this crew. I'm sure this book will be just as endearing and hilarious as the previous two installments. (series featured here and here)

We Are Not Free by Traci Chee
I'm ending the list with another World War II book. Traci Chee's book takes us to the U.S. Internment camps. (World War II Wednesday here)
Posted by JoLee at 7:00 AM