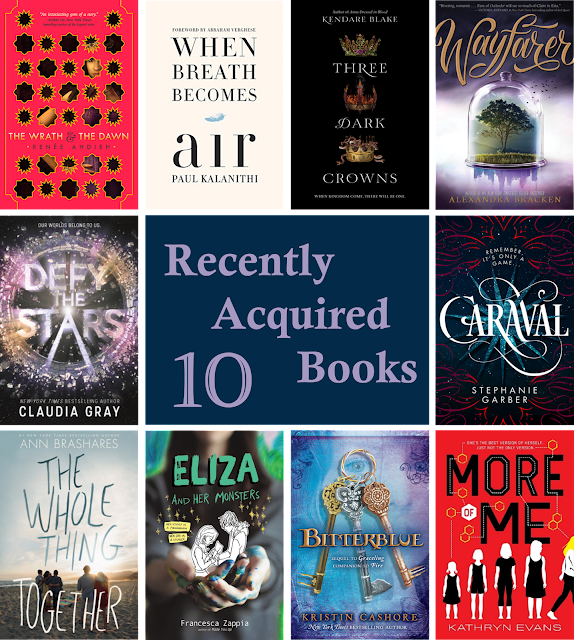 
The Wrath & the Dawn by Renee Ahdieh:
I've heard a million good things about this retelling of 1001 Nights. I finally decided to read it because Renee Ahdieh is coming to a book event I'm hoping to attend.

Three Dark Crown by Kendare Blake:
I was so excited when I saw that the library recently got this book on audio. I reserved a copy on Overdrive right away.

Bitterblue by Kristin Cashore:
I loved Graceling and Fire, and I have been meaning to read the third in the series for ages. When I saw this book come up on my library's "Recently Acquired" Overdrive shelf, I rejoiced because I knew that I would finally be able to finish the series. I really enjoyed this book. It made me feel so nostalgic for the first two books.


When Breath Becomes Air by Paul Kalanithi:
This was the book club pick for February. I listened to this book in one day. It's only 5 hours long, so that's less of an accomplishment than it sounds, but I was not expecting to be as consumed by this book as I was. It was an excellent book club pick. We talked about it for about three hours.

Caraval by Stephanie Garber:
This book has received so much hype. I've been eager to read it ever since it was all the rage at BEA in May, so I downloaded on the day it came out. I thought Caraval was a lot of fun. I'm definitely game for the sequel.

Wayfarer by Alexandra Bracken:
I enjoyed this sequel to Passenger even more than the first in the series. For a time travel series, I feel like this series is a little short on the more mind-bending aspects of time travel, so it would be a great pick even for people who aren't huge fans of the genre.


Defy the Stars by Claudia Gray:
I loved the Firebird Series so much that now I feel like I am game for anything that Claudia Gray writes. This book takes place in space and one of the characters is an AI. I'm sold. (Out April 4th, 2017)

The Whole Thing Together by Ann Brashares:
I'm intrigued by the premise of this book. It's about a broken family that shares the same beach house year and year, never crossing paths. I'm hoping for a book with the feel of We Were Liars or Even in Paradise. (Out April 25, 2017)

Eliza and Her Monsters by Francesca Zappia:
I really enjoyed Francesca Zappia's debut novel, Made You Up, and so I'm eager to read something by her again. Also, this book is about a girl who is the anonymous creator of a webcomic, and I like that idea. (Out May 30, 2017)

More of Me by Kathryn Evans:
This book is about a girl who unwillingly clones herself every year due to a genetic abnormality. It got great reviews when it was published in the UK, and the premise reminds me of a Cat Patrick book, and I am a fan. (Out June 13, 2017)