Pair It With: Challenger Deep and Made You Up

Within a month we have two books out that deal with issues of mental health and mental illness. Caden and Alex are main characters who cannot separate reality from delusion. These are important topics, and it is so refreshing to see authors tackling them with honesty.

Caden Bosch is coming unmoored. He is trapped between two worlds. In one world he lives with his parents and younger sister. At least he's pretty sure they are who they say they are. In another world he is on a voyage to explore Challenger Deep in the Marianas Trench aboard a ship full of misfits and contradictions. Reality, for Caden, is slipping away.

Challenger Deep is amazingly good and incredibly compelling. Neal Shusterman presents Caden's story in extremely short chapters that bounce back and forth between Caden's reality and his delusions. The story is told primarily in first person so it takes some effort on the readers part to put the pieces together when Caden cannot.

I found this book to be brilliantly written with an intentionality that is rare. The writing itself echoes Caden's experience. For example, the book begins in first person, and it's a bit confusing. Then, as Caden gets sicker he starts to feel like his mind is connected to everything in the world, and the narration switches to second person. The second person portions of the book are so disorienting and really help to convey the intensity of Caden's problem. When the narration once again returns to first person, it's an indication that Caden is beginning (he has a long way to go) to get better.  At this point things start coming together for the reader, as well, an indication of Caden's increased clarity.

The other thing that I really love about this book is how Caden's delusions are connected to his physical world. The reader begins to piece this together much sooner than Caden does. Those delusions are also so vibrantly real. I think one could argue that they act as an allegory for mental illness. Caden's voyage, the ship's crewman, the sea monsters, and the threat of mutiny convey the struggles of mental illness and the fight for recovery with a physicality that would not otherwise be possible.

The notes at the end of the book about Shusterman's family's own experiences with mental illness--the drawings were all done by his son Brendan during his illness--make the tale that much more poignant. 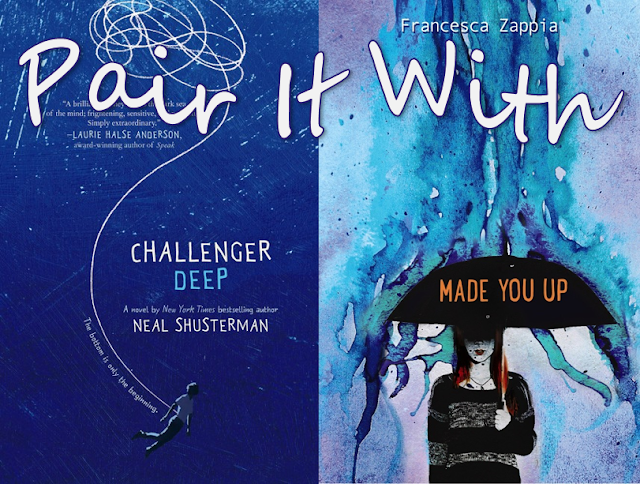 Alex Ridgemont is schizophrenic. Daily she battles her mind trying to determine what is real and what is a delusion. Made You Up chronicles Alex's senior year of high school which also happens to be her first year at a new school. There she meet Miles Ritcher, a boy that she thinks she recognizes as her first friend, but wasn't he a delusion? She doesn't know. As the year progresses, Alex falls in with a community service club run by Miles and populated with a interesting assortment of students. Weird things keep happening at Alex's school, but weird things always happen to Alex. How can she know what's real and what isn't and how can she get anyone to believe her?

I liked Made You Up. A lot. It was such a weird experience reading it because I truly had no idea what was real and what was delusion. Alex is the ultimate unreliable narrator after all, as she doesn't even know what is real. And, while I think I did a better job untangling reality from the delusions than Alex did, there were plenty of things that I got wrong. Overall, what I loved most about reading this book, is that it was such a different type of reading experience. In some ways, it was very conscious, and the book made my brain work in a different way than it normally does while I'm reading.

I also really enjoyed these characters. Alex and Miles are a unique pair. I was really rooting for them. The scenes with the two of them crackled with intensity. The cast of secondary characters is a lot of fun too. All the kids in the club are interesting, quirky people.

And, can I just talk about how impressed I am that Francesca Zappia wrote the bulk of this novel in middle school and high school. Middle school, people. I don't know what type of story lines I was coming up with in middle school, but there certainly wasn't anything that I would have ever considered sticking with until it was publishable.

Finally, I can't fail to mention this gorgeous cover. I'd hang it on my wall.

Review copy from Edelweiss.
Posted by JoLee at 4:43 PM

Email ThisBlogThis!Share to TwitterShare to FacebookShare to Pinterest
Labels: books, mental health matters, Pair it With