I'm linking up with Janssen of Everyday Reading and Dana of Something Good again to give a quick(ish) recap of last quarter's reading. I read 33 books in April, May, and June. Only 4 audio books this time, but I had the whole month of June off, so that helped. You have already seen many of these books on this blog. Others are slotted for upcoming posts (any guesses what the topics will be), and some you may never see on the blog again. 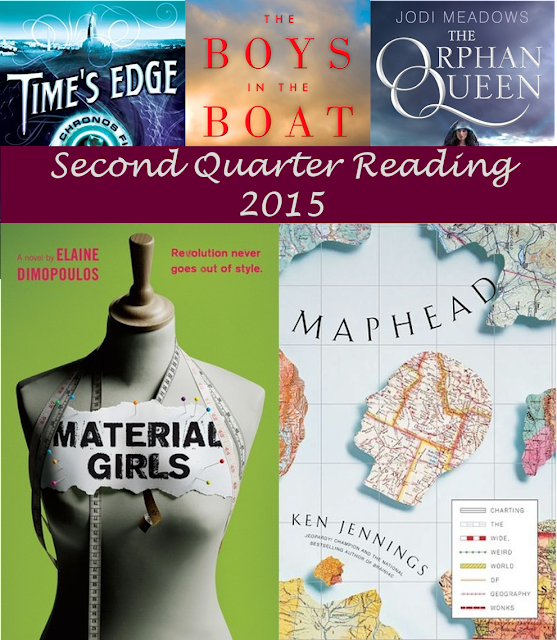 This sequel to Prisoner of Night and Fog has a "don't go back into the haunted house" quality to it.

My first Sanderson. I know.

A dethroned queen, a spy, a stuck-up prince, a handsome guard, a masked vigilante.

Return to Me with teenagers. And surfing.

A great debut about a teen whose best friend commits suicide.

A girl mourns the death of her brother. And surfing.

What an interesting fantasy setting. And the audio version is great. Loved the reader.

Love romances that navigate that tricky bridge from friends to more-than-friends.

I loved this Project Runway-inspired dystopia.

It was worth the 4-year wait for Dixon's second novel.

A stunning book about mental illness.

After finishing this book I started playing geography trivia games.

Wow. So intense. I am on pins and needles waiting for book 3.

I have mixed feeling about this one. So cutthroat and lots of classic ballet stereotypes.

Picked this up at BEA and read it before I read any others.

The life of a ballerina in 1957. Compelling plot but stilted dialog. Still, I kind of want to know what happens next.

The Phantom of the Opera in a ballet setting works really well.

Every Kasie West novel is an absolute delight.

This book had me silently wiping away tears.

A world where spells can solve your problems but not without side effects.

Truly some of the worst parents in all of YA.

This time travel novel has some pacing issues, but I liked the futuristic Denver setting.

The story of the rowing team that won in the Olympics in 1936 is 5-stars good.

Disappointed by this one. I thought it was kind of boring.

Absolute perfection. A kidnapped boy returns home. The girl next door. And surfing.

A summer with the two boys she hoped to never see again.