Pair It With: The Distance Between Lost and Found and All the Rage


And now for something serious. Today, we've got two books about girls who were assaulted, and, because their attackers are the sons of prominent members of the community, very few will listen to the girls' sides of the story. These books are about the aftermath of that trauma and how these girls find the strength to tell their stories.

The Distance Between Lost and Found is Kathryn Holmes's debut novel. It's the story of Hallelujah (Hallie) Calhoun. At last year's Youth Retreat, Luke, the son of her preacher, assaulted her and then lied about it. And, because he's the son of the preacher no one doubts his side of the story. Luke continues to torment Hallie so that she won't tell. And Hallie, she just shuts down.

Now, six months later, Hallie is back at Youth Retreat with Luke and all his friends except now she's a ghost of the girl she once was. She's just trying to be invisible until it's all over.

Then Hallie, her former best friend, Jonah, and new girl Rachel get lost in the woods. The nearness to danger and death forms a bond between these three, and Hallie, once again, finds life.

The survival aspects of this novel are all really well done. I am a very critical reader when it comes to survival books. Wasteland wanderings can be fabulous or horrifically repetitive. This one works. The "lost in the wilderness" portion of the novel is short enough that it doesn't get too repetitive but still feels very realistic. The kids do some things really wrong and some things right, and I appreciated that it wasn't a "everything that could possibly go wrong, does" type of novel.

Hallie's story is interspersed with the trio's tale of survival. She opens up little by little. And it's all handled with a deft hand.

The reader reviews for The Distance Between Lost and Found are all over the place. This isn't going to be a novel that works for everyone, and the big reason why not is because of God. These kids are in a youth group and God is part of the setting. I'm sort-of of two minds when it comes to the religion question in this novel. On the one hand, the kids are so open and honest about their questions, faith, and doubts. They are just trying to figure out if what they've been taught really makes sense. If you are religious or if you were raised religious, this will resonate with you. On the other hand, the religious adults in this novel are pretty extreme. (They did name their daughter Hallelujah, after all.) The lack of nuance and over-zealousness in their religious convictions is grating. I know it's meant to be, but it always bothers me when all the religious adults are of the same ilk. (Where are our nuanced, religious parents in YA novels? I don't know if I can think of one.)

The Distance Between Lost and Found was out in February 2015. 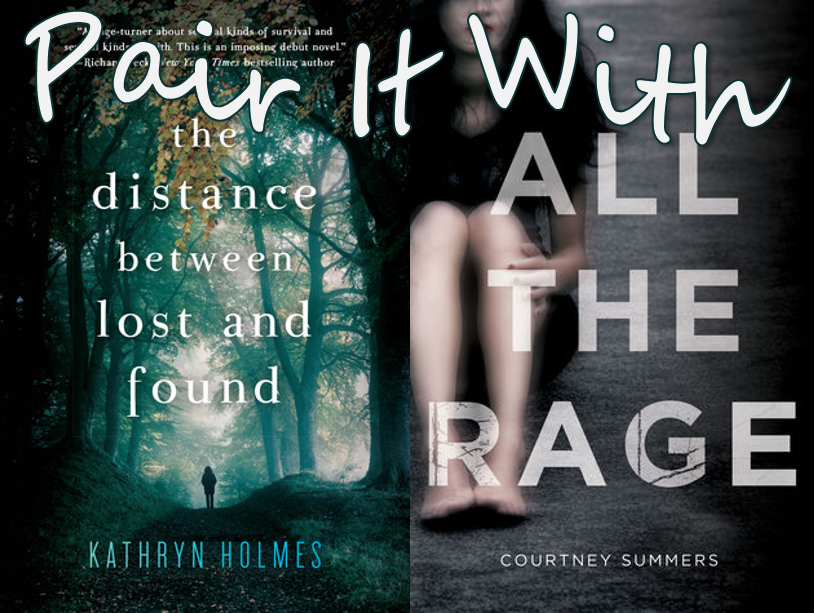 I read Courtney Summers's Some Girls Are several years ago and was hugely impressed. Summers has made a name for herself with her gritty realism and signature style. Summers doesn't shy away from tough, tough topics, and she does so unflinchingly. They are all stories that need to be told and issues that need to be met head-on. And I'm glad that Courtney Summers has the guts and the talent to do so. But you don't go into a Courtney Summers novel thinking it's going to be a fun read. It's going to be serious and tough to stomach at times.

All the Rage is about Romy Grey. She was raped by the sheriff's son, Kellan, but because Kellan is the son of the most prominent members of the community hardly anyone believes Romy. Romy is the type of girl that people make assumptions about because her family is poor and dysfunctional. I feel like the story is just as much about seeing beyond this second type of stereotype as it is about seeing beyond the first.

Then, the day of the big senior party, Romy's former friend, Penny, shows up at the diner where Romy works. And after the party, both girls are missing. Romy is found, and Penny is not.

Romy's life is pretty hellish. She's full of fear and anger. The whole thing is just truly horrible. Romy's classmates do awful, awful things to her. Things that should never happen to anyone. And, honestly, it's a little hard to read, but I knew what I was getting myself into. Through all of this Romy mostly deals by shutting down, putting on a mask, and blocking off that corner of her mind. But those walls can't last forever.

This book will make you think about how scary it is to be a girl sometimes.

All the Rage is a difficult read because it is so dark. I was filled with dread every time Romy left for school. Also, I found the book to be a bit long. I would have liked the plot to advance a bit more rapidly. Some of the bright spot in this book: Romy's job at the diner. People cared about her there. Even after all the horrible stuff started happening they were on her side. The other bright spot might be a bit too new to really count--Romy's family is finally in a stable place--but I think it bodes well for Romy's recovery.