I'm so thrilled to be part of the Tweet Cute blog tour. This adorable book is out today! It's a fantastic debut from Emma Lord that is basically guaranteed to put a smile on your face. 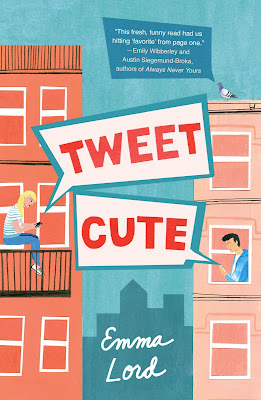 Enter Jack, class clown and constant thorn in Pepper’s side. When he isn’t trying to duck out of his obscenely popular twin’s shadow, he’s busy working in his family’s deli. His relationship with the business that holds his future might be love/hate, but when Big League Burger steals his grandma’s iconic grilled cheese recipe, he’ll do whatever it takes to take them down, one tweet at a time.

All’s fair in love and cheese — that is, until Pepper and Jack’s spat turns into a viral Twitter war. Little do they know, while they’re publicly duking it out with snarky memes and retweet battles, they’re also falling for each other in real life — on an anonymous chat app Jack built.

As their relationship deepens and their online shenanigans escalate — people on the internet are shipping them?? — their battle gets more and more personal, until even these two rivals can’t
ignore they were destined for the most unexpected, awkward, all-the-feels romance that neither of
them expected.


I knew I had to get my hands on Emma Lord's debut from the moment I first heard about it. Not only did it sound adorable, but it also has a bunch of elements that I'm unashamedly a complete sucker for. We've got teens with jobs, teens on the internet, and letters from strangers. I just had to see how all of these elements would come together in one book.

I have to say, Tweet Cute completely met my expectations and lives up to its title. This book is so sticking cute. First of all, I absolutely loved the relationship between Pepper and Jack. I'm all in for fictional relationships with a fair amount of snark, and these two can really deliver. I really enjoyed how this book had Jack and Pepper interacting on multiple platforms. It was fun to see how their relationship developed when they both knew with whom they were interacting and when they didn't.

But Tweet Cute isn't all fun and games, Jack and Pepper have some family issues that make this book both a little more serious and a little more meaty. Both teens are part of families with big expectations. They are trying to navigate the tricky road of being true to themselves and wanting to please the people they love. I knew that, before the end of the book, the characters would not only have to face the feelings they had for one another, but would also have to have a serious heart to heart with their respective families.

All of this takes place in the fast-paced, private school, New York setting, where the big franchise is pitted against the downtown deli. I love a good New York setting, and, as an overachiever and former high school athlete, I found Pepper's character to be very relatable.

If you like baking (or eating) desserts, if you love New York, if you are a swimmer or a diver, if you can't resist a good grilled cheese, or, if you just enjoy a cute teen romance, might I suggest Tweet Cute? 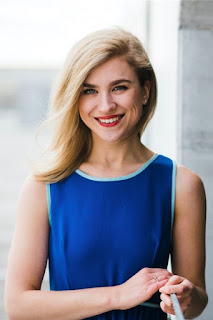 
Emma Lord is a digital media editor and writer living in New York City, where she spends whatever time she isn’t writing either running or belting show tunes in community theater. She graduated from the University of Virginia with a major in psychology and a minor in how to tilt your computer screen so
nobody will notice you updating your fan fiction from the back row. She was raised on glitter, grilled cheese, and a whole lot of love. Her sun sign is Hufflepuff, but she is a Gryffindor rising. TWEET CUTE is her debut novel. You can find her geeking out online at @dilemmalord on Twitter.