2016 marks the 400th anniversary of William Shakespeare's death. The year has been full of celebrations, performances, and special events to commemorate The Bard. (Check out Shakepeare400, Shakespeare400Chicago, and Shakespeare 2016.) Because we really are all about commemorations over here at Intellectual Recreation we wanted to get in on the action before the year was up. So we did what we do best and gathered a group of Young Adult Books inspired by Shakespeare's plays. 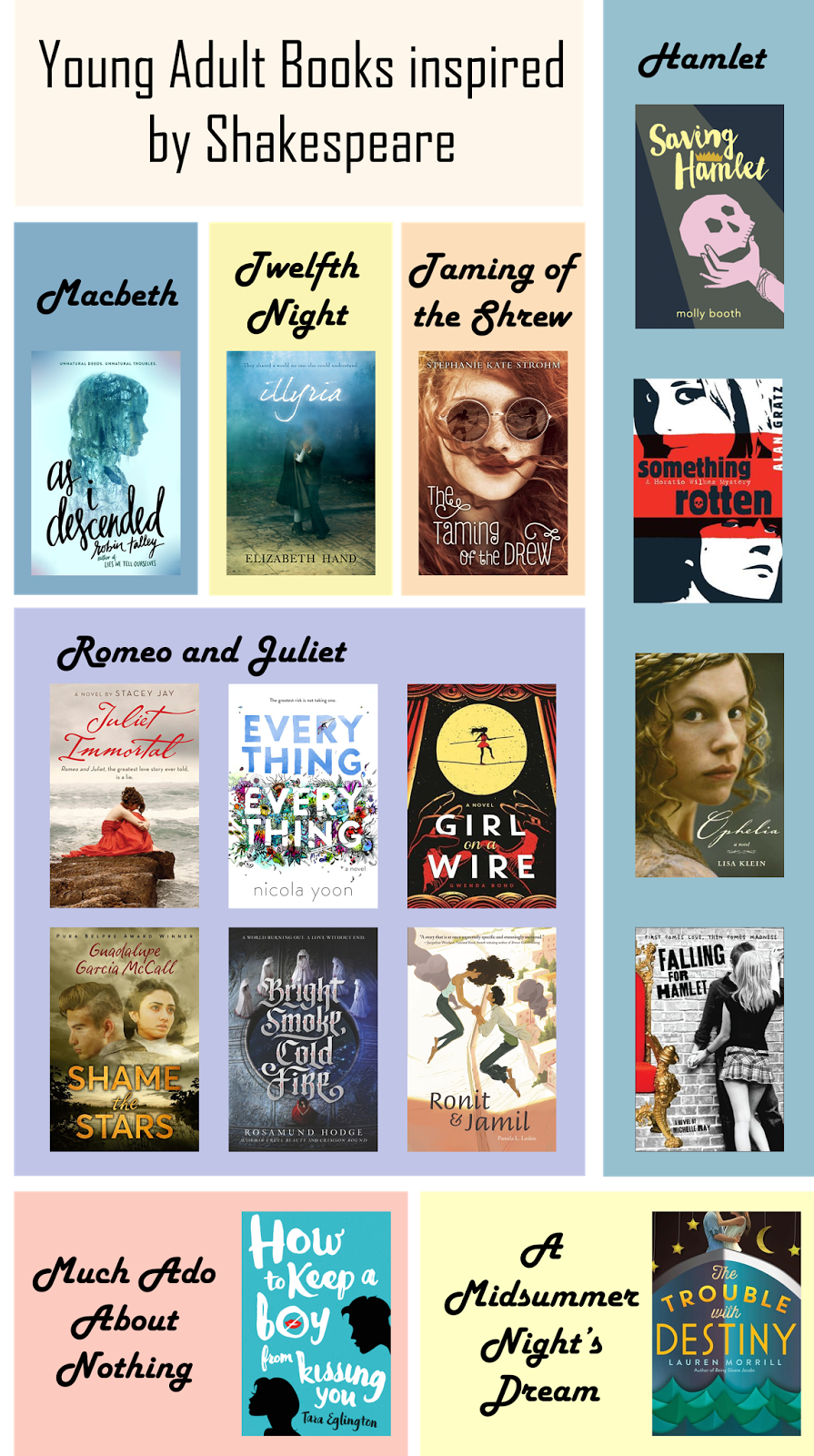 As I Descended by Robin Talley:
Robin Talley's new book is an LGBTQ retelling of Macbeth set in a Southern boarding school. It's spooky and perfect if you are in the mood for a ghostly tale.

Illyria by Elizabeth Hand:
First cousins and first loves are cast as opposites in their school's production of Twelfth Night where all their secrets come to a head.

The Taming of the Drew by Stephanie Kate Strohm:
Headstrong Cass McKay is cast as Kate in her summer Shakespeare theater's production of The Taming of the Shrew. In a role reversal, Cass decides it's her castmate, Drew, who needs taming.

Saving Hamlet by Molly Booth:
As assistant stage manager, Emma Allen, attempts to save the drama club's production of Hamlet she ends up back in 1601 at the Globe Theater! How will Emma juggle two productions of Hamlet--one in the past and one in the present?

Something Rotten by Alan Gratz:
Hamilton Prince's father is murdered. With an overabundance of suspects, high school sleuth, Horatio Wilkes, is going to have to pull out all the stops if he wants to solve the case in this modern twist on Hamlet set in Denmark, Tennessee.

Ophelia by Lisa M. Klein:
Lisa Klein imagines the story behind one of Shakespeare's most tragic side characters in this retelling of Hamlet. How did Ophelia become involved with Hamlet and what drives her to her demise?

Falling for Hamlet by Michelle Ray:
This modern-day retelling of Hamlet brings together Shakespeare and the challenges of dating a famous prince. What happens to the story of Hamlet when the paparazzi gets involved?

Juliet Immortal by Stacey Jay:
In Verona all those years ago, Romeo killed Juliet in order to gain eternal life. In the hundreds of years that followed, Romeo and Juliet have been fighting one another, returning to earth again and again to either destroy true love or protect it.

Everything, Everything by Nicola Yoon:
A Romeo and Juliet tale where the Juliet character has a rare disease, and Romeo is the forbidden boy from next door who could kill her just by being in her presence.

Girl on a Wire by Gwenda Bond:
Wirewalker Jules Maroni and trapeze-artist Remy Garcia seek to uncover the mysteries of the past, discover why their families are enemies and who wants the past to repeat itself in this Romeo and Juliet tale set in the circus.

Shame the Stars by Guadalupe Garcia McCall:
Set along the Texas-Mexico border of 1915, Joaquin and Dulcea are involved in a forbidden romance. Shame the Stars recasts Romeo and Juliet amidst the racial and political tensions of Texas history.

Bright Smoke, Cold Fire by Rosamund Hodge:
This dark fantasy retelling is set in a world with blood magic, forbidden necromancers, and zombies. A truly creepy Romeo and Juliet tale where Paris and Rosaline are stars and Juliet is a trained killer.

Ronit and Jamil by Pamela L. Laskin:
This novel in verse sets Romeo and Juliet amidst the modern-day Israeli-Palestinian conflict. Can Ronit and Jamil's love prevail over centuries of distrust and hate? Out February 21, 2017.

How to  Keep a Boy from Kissing You by Tara Eglington:
Aurora is saving her first kiss for someone special, so when she's cast as Beatrice opposite her obnoxious neighbor in her school's production of Much Ado About Nothing and the role requires locked lips, Aurora determines to do everything in her power to make sure that kiss never happens.

The Trouble with Destiny by Lauren Morrill:
This loose retelling of A Midsummer Night's Dream involves a high school drum major trying to win a talent competition and save her band aboard the cruise ship Destiny where misunderstandings and complications abound.