When I was in college, I went through a middle-grade literature revival. Basically, what that means is that I read Harry Potter and, consequently, my eyes were opened to other books for young readers. I read so many great middle-grade books in those years, some by myself, some with my roommates, and some with my sister. The great middle-grade revival is really what led me to Young Adult fiction where I've been hanging out now for many years. I still do love middle-grade, and every once in a while it's fun to revisit this section of the bookstore. Here are some of the middle-grade books we've enjoyed this fall. 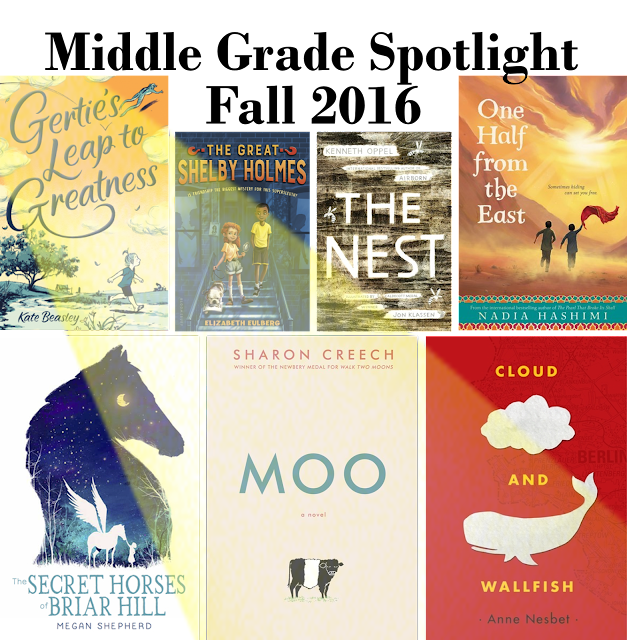 Gertie's Leap to Greatness by Kate Beasley:
Gertie is a girl on a mission, and she always fulfills her missions. Her new goal is to become the best fifth grader in the universe, thereby keeping her mother from moving away. All is well until the first day of school brings new girl, Mary Sue Spivey. All of a sudden, Gertie has major competition. How will she keep Mary Sue from hindering this, her most important mission of all? This book was charming. I loved the small town, southern feel, and the way the book captured a fifth graders thoughts and problems. I was invested in Gertie's journey and enjoyed rooting for such driven character. Gertie's Leap to Greatness is out October 4, 2016 from Farrar, Straus and Giroux. Review copy from NetGalley.

The Great Shelby Holmes by Elizabeth Eulberg:
On his first day in New York, John meets Shelby. She's brusque, blunt, and addicted to sugar, but somehow, everyone in the neighborhood seems to be her fan. John-- or Watson, as Shelby insists on calling him-- begins to understand why when a classmate asks Shelby to find her missing dog. Watson gets swept into Shelby's world of mystery and deduction, possibly making a friend in the process. This book is such a fun homage to Sherlock Holmes. I love the way Elizabeth Eulberg tailored the original characters to be children in New York. Her attention to detail is impeccable, which I especially appreciate in a retelling. The Great Shelby Holmes is out September 6, 2016 from Bloomsbury Childrens. Review copy from NetGalley.

The Nest by Kenneth Oppel:
Steve's house has been full of worry ever since his baby brother came home from the hospital. The baby isn't well and probably never will be. Steve just wants the baby to be better, so at first he's relieved when the queen wasp in his dreams tells him she can fix the baby. But as the baby's "healing" draws closer, Steve begins to think that maybe he should never have teamed up with the wasps. This book is so strange and so good. Kenneth Oppel does an amazing job conveying a child's fears when faced with real-life, too-big-for-him problems. I read this book in two sittings. The Nest is out in paperback on October 4, 2016 from Simon & Schuster. Review copy from Edelweiss.

One Half from the East by Nadia Hashimi:
Obayda is the youngest of four daughters and when her father loses a leg in an explosion, her family is desperate for some good fortune. It is decided that Obayda will dress and act as a boy, a bacha posh. Now known as Obayd, she is very uncomfortable with her new life until she meets another bacha posh. The two learn to love their lives, but a bacha posh is not meant to be a boy forever. This story made me think; it made me wonder. I was fascinated by this glimpse into a culture I know little about. Thematically, I would consider this an older middle grade novel, bordering on young adult, but it is definitely worth a read. One Half from the East is out September 6, 2016 from HarperCollins. Review copy from Edelweiss.

The Secret Horses of Briar Hill by Megan Shepherd:
Only Emmaline can see the winged horses that live in the mirrors at Briar Hill Hospital. She often wonders about their mirror-world. Then one day she finds a winged horse in the closed-off garden. It is injured and she must protect it, but the world is such a dangerous place. Not only is there sickness all around, but a war is raging and no one is safe. This beautiful story is a work of magical realism or perhaps metaphor set during World War II.  Questions of reality are secondary to the themes of love and danger in this poignant and enchanting middle-grade tale. The Secret Horses of Briar Hill is out October 11, 2016 from Delacorte Books for Young Readers.

Moo by Sharon Creech:
Reena and Luke are city kids, through and through, but now they live in rural Maine and their parents volunteered them to help crazy Mrs. Falala with her animals. Reena does not immediately connect with any of the animals, and she finds herself in a battle of wills with Zora, the stubborn cow. When Mrs. Falala decides she wants Reena to show Zora at the fair, Reena truly has her work cut out for her. I loved this story. I'm a sucker for a book in verse and I've been a fan of Sharon Creech since I read Walk Two Moons as a kid. Moo is sweet, sincere, funny, and lovely. I enjoyed every minute of it. Moo is out August 30, 2016 from HarperCollins. Review copy from Edelweiss.

Cloud and Wallfish by Anne Nesbet:
Noah Keller's parents are acting really weird. When they picked him up from school they told him they were leaving for East Berlin right away so that his mother could do research for her dissertation. Then they proceeded to tell him Noah Keller is not really his name, his birthday isn't what he thought it was either, and that he needs to follow a long list of rules while in Germany. Noah is pretty sure his parents aren't what they seem. This middle-grade story of a boy behind the Iron Curtain was not exactly what I expected, but I liked it all the same. I could especially appreciate the book because in 1989, I was the same age as Noah. It was interesting to imagine myself in his shoes. Cloud and Wallfish is out September 2, 2016 from Candlewick. Review copy from NetGalley.

Gertie's Leap to Greatness, The Great Shelby Holmes, One Half from the East, and Moo reviewed by Paige.
The Nest, The Secret Horses of Briar Hill, and Cloud and Wallfish reviewed by JoLee.
Posted by JoLee at 7:00 AM