I love William Ritter's Jackaby series with a fervor that I reserve for just a few books. Jackaby made my list of favorite debuts in 2014. I read Beastly Bones in 2015 and loved it even more than the first in the series! It easily secured a spot on my favorites of the year list. I just about fainted from excitement when I got an early copy of the upcoming Ghostly Echoes. All that love, my friends, is why I had to shout to the world this fabulous ebook deal. 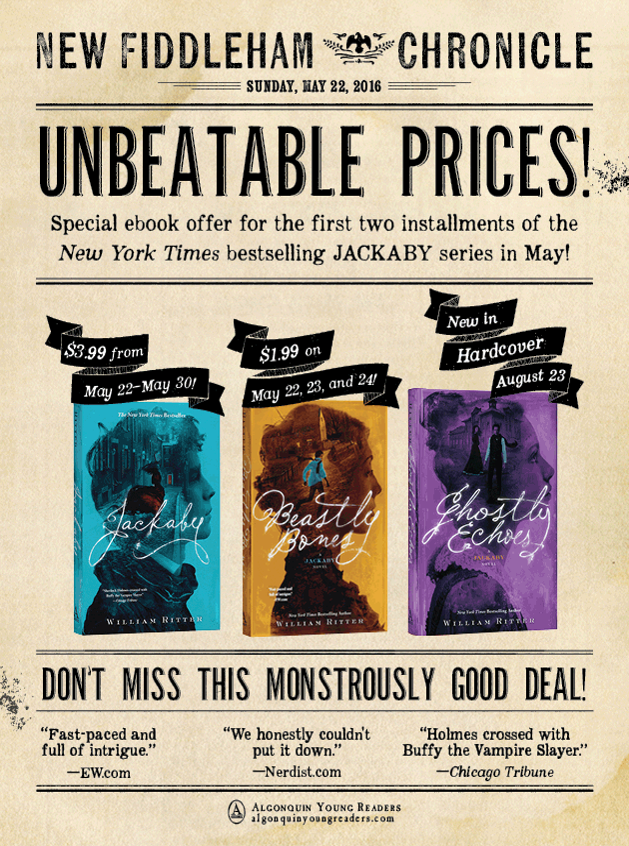 
“Miss Rook, I am not an occultist,” Jackaby said. “I have a gift that allows me to see truth where others see the illusion--and there are many illusions. All the world’s a stage, as they say, and I seem to have the only seat in the house with a view behind the curtain.”

Newly arrived in New Fiddleham, New England, 1892, and in need of a job, Abigail Rook meets R. F. Jackaby, an investigator of the unexplained with a keen eye for the extraordinary--including the ability to see supernatural beings. Abigail has a gift for noticing ordinary but important details, which makes her perfect for the position of Jackaby’s assistant. On her first day, Abigail finds herself in the midst of a thrilling case: A serial killer is on the loose. The police are convinced it’s an ordinary villain, but Jackaby is certain it’s a nonhuman creature, whose existence the police--with the exception of a handsome young detective named Charlie Cane--deny.

Doctor Who meets Sherlock in William Ritter’s debut novel, which features a detective of the paranormal as seen through the eyes of his adventurous and intelligent assistant in a tale brimming with cheeky humor and a dose of the macabre.

Jackaby is featured on Intellectual Recreation in Reading on a Theme: Serial Killers and the Supernatural.


“I’ve found very little about private detective R. F. Jackaby to be standard in the time I’ve known him. Working as his assistant tends to call for a somewhat flexible relationship with reality.”

In 1892, New Fiddleham, New England, things are never quite what they seem, especially when Abigail Rook and her eccentric employer R. F. Jackaby are called upon to investigate the supernatural.

First, a vicious species of shape-shifters disguise themselves as a litter of kittens, and a day later, their owner is found murdered with a single mysterious puncture wound. Then in nearby Gad’s Valley, now home to the exiled New Fiddleham police detective Charlie Cane, dinosaur bones from a recent dig mysteriously go missing, and an unidentifiable beast starts attacking animals and people, leaving their mangled bodies behind. Charlie calls on Abigail for help, and soon Abigail and Jackaby are on the hunt for a thief, a monster, and a murderer.

Beastly Bones is featured on Intellectual Recreation in Reading on a Theme: Historical Detective Duos

To be Published: August 23rd, 2016 by Algonquin Young Readers


Jenny Cavanaugh, the ghostly lady of 926 Augur Lane, has enlisted the investigative services of her fellow residents to solve a decade-old murder—her own. Abigail Rook and her eccentric employer, Detective R. F. Jackaby, dive into the cold case, starting with a search for Jenny’s fiancé, who went missing the night she died. But when a new, gruesome murder closely mirrors the events of ten years prior, Abigail and Jackaby realize that Jenny’s case isn’t so cold after all, and her killer may be far more dangerous than they suspected.

Fantasy and folklore mix with mad science as Abigail’s race to unravel the mystery leads her across the cold cobblestones of nineteenth-century New England, down to the mythical underworld, and deep into her colleagues’ grim histories to battle the most deadly foe she has ever faced.