We are linking up today with The Broke and the Bookish for Top Ten Tuesday. This week's topic: ten books on our Spring TBR. 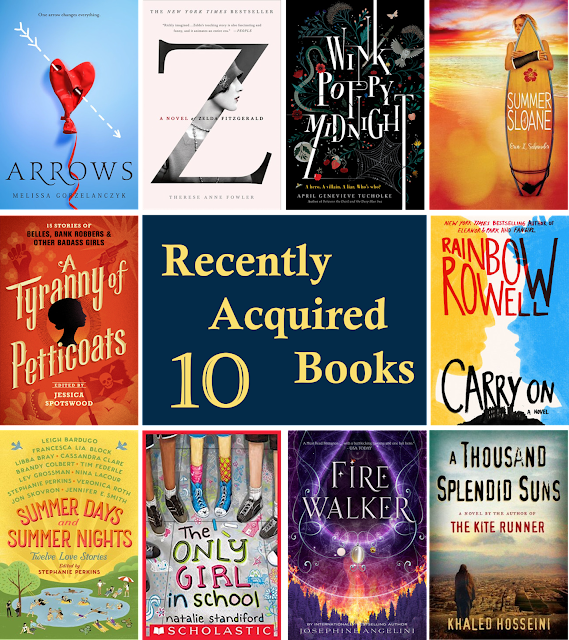 
Carry On by Rainbow Rowell: I've been waiting in the queue for the audiobook version of Rainbow Rowell's newest for quite some time now. You can bet that I dove right in once I reached the front of the line.

A Thousand Splendid Suns by Khaled Hosseini: This is the book club pick for the month. I tried and failed to finished The Kite Runner several years back, but I'm moving swiftly through this one. It's pretty gut-wrenching and is sure to make for a great discussion.


Z: A Novel of Zelda Fitzgerald by Therese Anne Fowler: I've wanted to read this book for a long, long time. It was a sale book on Audible a couple of weeks back, and I thought, "Now's my chance."

Firewalker by Josephine Angelini: I was pretty darn impressed with Trial by Fire, the first in the World Walker series. Firewalker was equally compelling. Now I'm counting down the days until September 20th when Witch's Pyre comes out.


Arrows by Melissa Gorzelancyzk: A couple of Saturdays ago I went to the NoVa Teen Book Fest and got to hear so many great authors talk. I had to restrain myself from buying all the books. This one made the cut. It's a modern day cupid story, and I do love when mythology collides with the modern world.

A Tyranny of Petticoats edited by Jessica Spotswood: Here's another NoVa purchase. This collection features short stories starring girls living in the American past. Basically, it sounds like a book written just for me. And I could get four of the authors to sign it, so double win.

The Only Girl in the School by Natalie Standiford: It's been a good month for book events for me. I also went to a Natalie Standiford signing and picked up this middle-grade gem. It's about, you guessed it, a girl who is the only girl in her school. I've read the first few letters (it's an an epistolary novel) and it's really funny.


Wink Poppy Midnight by April Genevieve Tucholke: I'm so thrilled that I got a copy of this one. Doesn't it seem like everyone is talking about this book? I'm about halfway through, and it's just as weird as it promised to be. Basically, I have no idea what's up and what's down. (Out March 22nd, 2016)

Summer of Sloane by Erin L. Schneider: Don't you love this cover? It's just so warm and screams summer. I'm excited to dive into this story of love, betrayal, and surfing. (Out May 3rd, 2016)

Summer Days and Summer Nights edited by Stephanie Perkins: And speaking of summer, I'm excited about this collection of short stories all about summer romance. This is sure to be a great seasonal read. (Out May 17th, 2016)