Pair It With: None of the Above and Symptoms of Being Human

Today we have two young adult novels that feature main characters who do not fit into the gender binary and who are outed at their schools. Kristin is intersex and Riley is gender fluid.

None of the Above by I.W. Gregorio
Publisher/Year: Balzer + Bray - April 2015
Genres: Contemporary YA


Kristin Lattimer is a track star and homecoming queen. She has two great best friends and a long term boyfriend. Then, at a routine gynecology appointment, she learns that she is intersex. She has androgen insensitivity syndrome meaning that he body is resistant to male hormones. People with AIS have XY chromosomes but the many of the physical traits of a woman.

Author I.W. Gregorio is a surgeon, and she was inspired to write this story because of an encounter during her residency with an intersex young woman who has just discovered her condition as teenager. It was clear to me while reading that Gregorio had experience in the medical field as she was able to navigate the reader through all of these aspects of the book with superb adroitness.

Kristin's response to her diagnose is written very realistically. I could quite easily understand why Kristin made the choices she did in the weeks that passed after finding out. I actually grew quite fond of Kristin. She is a very sympathetic character. She's a good person, and, of course, I am always a fan of characters who are runners.

Kristin's biggest challenge is what other people are saying and thinking about her. When the story is circulated around the school you can imagine how betrayed she feels. Luckily, there are some really lovely characters who befriend Kristin while she is navigating this new reality. Darren, is particularly great, but I also quite liked snarky Julia.

None of the Above is both informative and a good story. It's Middlesex for a new generation. 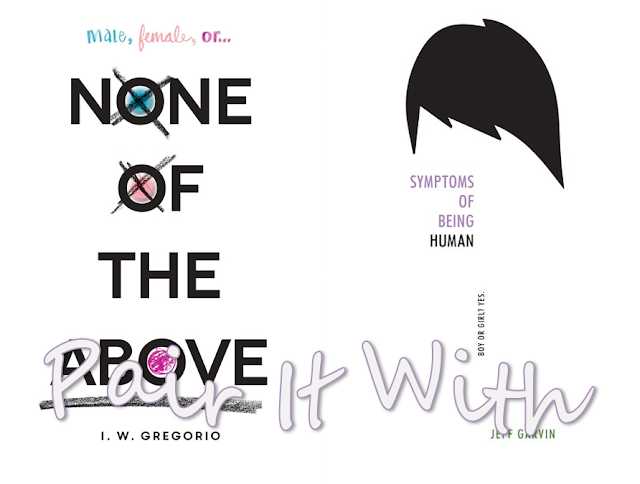 
Symptoms of Being Human opens with the line, "The first thing you’re going to want to know about me is: Am I a boy, or am I a girl?" These are the opening lines in Riley Cavanaugh's first anonymous blog post. Riley is gender fluid. Some days Riley identifies as a boy, some days as a girl. Sometimes a flip can happen in the middle of the day. As a result, Riley is dealing with some pretty hefty body dysphoria, meaning that the body Riley inhabits often feels like it doesn't fit. The dysphoria causes an anxiety that landed Riley in a mental health facility and with a therapist who prescribed this anonymous blog to help Riley find a community. Then the blog goes viral.

As if Riley's life isn't complicated enough, Riley's father is a congressman running for reelection, and Riley has just transferred to a new school. Facing bullying and pressures at home Riley feels compelled to keep this secret.

Beyond informing its audience of the ins and out of what it means to be gender fluid, Symptoms of Being Human has a lot of heart. Riley finds two friends and allies at the new school, and they are both great characters. Also, Riley has a very supportive family, and ends up finding support in the community as well.

I never like reading about bullying, and Riley suffers through some truly terrible moments. This book definitely feels like an issues-book, but sometimes an issues book is  what's needed.

Email ThisBlogThis!Share to TwitterShare to FacebookShare to Pinterest
Labels: books, mental health matters, Pair it With