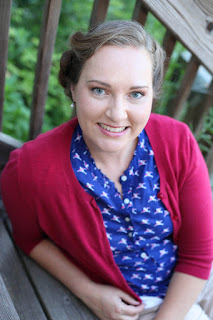 Sarah Creviston Lee is the author of The War Between Us, the story of Alex Moon, a Korean American who gets stranded in the Indiana during World War II. We had the opportunity to talk all about her love of history and what inspired her to write her novel.

Your new novel takes place on the American home front during World War II. Can you tell us a little bit about how you got interested in writing about the World War II era?

I’ve loved learning about the WWII era since I was thirteen. I read every historical fiction book on the topic in my library. Some of them even gave me nightmares! The time period has always fascinated me, from the tragic story of the Holocaust, to American and British women’s roles in the war, to the American and British home fronts and food rationing. When I did a study abroad in London in 2005, I had the privilege of doing research at the Imperial War Museum on British women’s roles in the war. I am so grateful for that experience, and I never seem to run out of things to learn about this era!
What’s funny is that despite my life-long interest in WWII, I never thought to write about anything set during that time. As a writer, it makes sense to write about what you know so you have that sense of authority on the subject, but I had never entertained a story idea for WWII until I researched my way into a gaping hole in WWII fiction – the Korean American wartime experience. It was then that I knew I wanted to be the one to write that book.


I know that in addition to your writing you have several other projects related to the WWII era. Can you tell us a little bit about them?
Ever since graduating from college, I’ve had plans to go back for my master’s degree and I had my thesis paper all planned out. It involved American & British wartime food rationing. I love cooking and baking, and the creativity that came out of food restrictions during wartime was so interesting to me! Well, I haven’t been able to go back to school, so I started my research early. In 2014, I decided on a semi-ambitious project – for one year I would make one ration recipe a week and blog about it over at my history blog, History:Preserved. I made 52 recipes, both American and British, and I learned a lot! I continue to try new ration recipes and plan on starting another ration cooking project soon.
I also enjoy sewing now and then, and recently my family and I have decided to get into WWII reenacting. I’m in the process of collecting patterns, networking with other reenactors, and getting our historical clothing ready for our first event. I am so excited to share my food and ration knowledge with the public at these events, and helping them learn about a fascinating period of our country’s history in a way they haven’t heard about before.

How have these projects contributed to the formation of your novel?
After a year of making ration recipes, I thought I knew a good amount about them, but since my book takes place during a specific time — August 1942 to Feb/March 1943 — I had to break down rationing month by month, and that was very challenging, but very revealing. It changed how I had to write my character’s daily life since they were only dealing with rubber, gasoline, and sugar rationing at first. Coffee is rationed later in my book, but full-on rationing of canned goods, meats, fats and processed foods that began in March of 1943 doesn’t even make an appearance. I didn’t set out to do it at first, but I wanted to show an accurate picture of wartime rationing, since, I feel, that whole experience tends to get lumped together.
I didn’t do my ration project as research for writing this book, but it turned out to be a very handy experience. And because of having to watch a ton of amazing food in Korean dramas, I’ve experimented making a handful of Korean dishes as well! So, with my cooking experience I wanted to show my characters making the foods that I had made like cottage cheese and cucumber sandwiches, Beef Roll, and Oatmeal Drop Cookies, as well as the Korean recipes of kimchi, maejakgwa cookies, and tteokguk soup. You can find those ration recipes and a whole lot more of them at my history blog.
Also, while doing research for clothing on the time period, I was able to better understand the fashions early on in the war and tried to put little hints of that in my book. I’m still in the early stages of learning 1940s sewing, so I relied a lot on my research of clothing advertisements and patterns available from that time to embellish my character’s clothing choices.

The War Between Us is about a young Korean American, Alex Moon, who faces a lot of misunderstanding and hostility when he becomes stranded in a Midwestern town. What led you to explore the Korean American wartime experience?To be honest, I’d have to give credit to Korean dramas and my friend Julianne for introducing them to me. I loved the refreshing change Korean TV was from American shows, and I was surprised by how much I grew to love learning about the culture and falling in love with the sound of the language. After 2 years of watching Korean TV, (call it 2 years of research – Ha!) my historian, 1940s-loving self finally emerged and began asking what Korean Americans were doing during WWII. I’d read about the Japanese American experience, but no other Asian American experience. When I did research, I was shocked to find almost nothing about Koreans. Even books published about Korean American history had very little to say about their wartime experience. Luckily, and thankfully, I found a doctoral thesis by Lili M. Kim about Korean Americans during WWII. This hunt for information along with the thin facts available told me that this was a story that needed to be told – a story of their fight to free their homeland of Korea from the Japanese rule and the fight for their identity and individuality. They were tied to Japan in so many ways (literally and in the eyes of the American people and government). They fought so hard to free themselves of that connection, and it’s such a fascinating and compelling story! This, combined with my developed love for the Korean people and their culture, is what really drove me to write this book.
Also, when I began writing this book, I knew I wanted to write about the plight of the Korean American experience during World War II and wanted to include a love story. As I wrote, I was drawn to my Great Aunt Elaine and Great Uncle Harry’s story. They married in the late 1930s and were together through the war until she died in 1947. Harry was born in China and immigrated with his parents to Indiana as a young man, where he helped his father run a Chinese restaurant in Anderson. Elaine was a Christian girl of English descent from the Midwest attending school at Anderson College. She worked as a waitress at Harry’s restaurant. It was such a tumultuous time for them to marry, that I wondered at their decision. Surely, there must have been some amount of prejudice and challenge to marrying outside their individual cultures.
I was fascinated by Aunt Elaine’s choice and asked my Great Uncle Burke, her brother, about her decision. He told me that the book The Vintage of Yon Yee by Louise Jordan Miln, which I have my main character Lonnie read, was a major influence in her decision to marry Harry Chan. I couldn’t help but smile over the idea that a book could have such an impact.
So while this story is not based on Harry and Elaine’s lives, they did serve as a muse and motivation to explore this fascinating aspect of our country’s history—a long history of immigrants and their posterity making their way in a complicated, imperfect world. Cross-racial marriages were still prevented in many states during that time and presented a lot of cultural difficulties, and I wanted to explore that aspect as well.

Do you think you will visit World War II again in your writing? If so, what other aspects of the war would you like to explore?
It’s possible! I’ve been asked by several people if there will be a sequel to my book. I’ve said no so far, because I know it would be a very sad story to tell – Alex and Lonnie have a hard road ahead of them. I have thought of writing about a few of my side characters, and with that, I would be interested in exploring the role of agriculture and other aspects of women’s jobs during the war.
In WWII historical fiction, you don’t usually read about the men who stayed behind due to ineligibility, their jobs in the war industry, and even the conscientious objectors. My grandfather was a religious conscientious objector and worked for the U.S. Forest Service during the war instead. Conscientious objections are on the controversial side that we tend not to celebrate, but disdain in favor of patriotism. Cultural feeling toward those people usually manifested in a form of prejudice and persecution not based on race, but belief. I think it would be interesting to explore this aspect.


Thanks Sarah! I loved learning more about your research and inspiration! 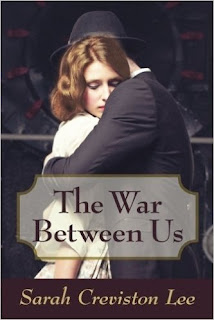 Source: Copy from the author

Alex Moon is not the enemy.

Six months after Pearl Harbor's tragedy, Korean American Alex Moon is sent away from his home in California for refusing his father's request to join the fight against the Japanese. On his journey, Alex is attacked and stranded in the small town of River Bluff, Indiana just for looking like America's most hated enemy.

Unexpectedly, Alex is befriended by a local girl, Lonnie Hamilton, who comes to his defense, saving him from doubt and despair while placing herself in the cross hairs of prejudice. Alex falls in love with his ally---a love that is clearly forbidden. Torn between his dual identities, Korean and American, and grappling with how everyone sees him, Alex must wage the war within himself---of defending who he is, resolving his tortured feelings about the war, and fighting for the woman he loves.

Join us tomorrow as we take World War II into the realm of speculative fiction.