When your friend is an author and you are a book blogger, it's kind of a perfect situation for all. Today I'm so excited to bring you my good friend Sarah's first book, The War Between Us. 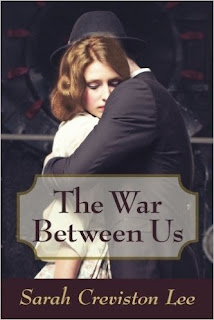 Source: Copy from the author

Alex Moon is not the enemy.

Six months after Pearl Harbor's tragedy, Korean American Alex Moon is sent away from his home in California for refusing his father's request to join the fight against the Japanese. On his journey, Alex is attacked and stranded in the small town of River Bluff, Indiana just for looking like America's most hated enemy.

Unexpectedly, Alex is befriended by a local girl, Lonnie Hamilton, who comes to his defense, saving him from doubt and despair while placing herself in the cross hairs of prejudice. Alex falls in love with his ally---a love that is clearly forbidden. Torn between his dual identities, Korean and American, and grappling with how everyone sees him, Alex must wage the war within himself---of defending who he is, resolving his tortured feelings about the war, and fighting for the woman he loves.

I didn't know much about Korean Americans' experiences during the World War II era before I read The War Between Us. I love that it tells a different side of the story, and that I felt like I really learned a lot while being entertained.

Sarah Lee was a historian before she took up the pen, and all of her experience researching really shines through in this novel. The setting, both in terms of time and place, is so well crafted. All of the meals that Lonnie makes in the book are meals that Sarah has prepared and then shared on her blog, History: Preserved, as part of a year-long project to cook from a wartime rations cookbook. I also happen to know that Sarah sews, and she has made a lot of historical clothing. Her excellent descriptions meant that I could easily visualize the characters' clothing. Little details like these and period-appropriate language really helped set the book in the correct era. The Korean culture was equally well done, with language, food, and other elements of the culture adding authenticity to Alex's character.

In addition to the great setting, the characters in The War Between Us are full and complicated. Their motivations and desires run deep. Just like all of us, they make mistakes, keep secrets, and muddle their way through. I was particularly sensitive to Alex's situation. His conflicted feelings about his family, the war, and his place in America are often so raw and real. He can be quick to anger, but, as a reader, I loved him anyway. I also really love Lonnie's younger siblings and her aunt. That crew has some spunk.

I enjoyed the slow buildup of the romance in The War Between Us. Lee gives her characters time to get to know one another. The added benefit here is that she also gives the town of River Bluff time to get to know Alex so that when things finally come to a head, he's made some good allies.

I'd definitely recommend this book for anyone that is interested in home front World War II era stories. Head over to Goodreads and enter the giveaway that is going on now through February 12th.