Pair It With: One Plus One and The Bean Trees

One Plus One is only the second Jojo Moyes book that I've read. I started with The Girl You Left Behind but it fell a little flat for me, so I was a little wary going into One Plus One, but it turns out I didn't need to be. One Plus One worked so much better for me.

Jess is a single mom. Her husband is living with his mother so that he can deal with his depression. Her stepson is a little different and keeps getting beat up by the rough kids in the neighborhood. Her daughter is a brilliant mathematician who has been offered a scholarship to a private school, but Jess can't afford to cover the remaining 10% even though she works all the time.

Ed is a software engineer who is attempting to escape some problems of his own by hiding at his beach house, which Jess just happens to clean. Somehow Ed finds himself driving Jess and her crew to Scotland so that Tanzie can participate in the Math Olympiad and win that missing 10%.

The emotional connection that I felt was missing in The Girl You Left Behind was definitely there in One Plus One. I loved these quirky characters. If you enjoy stories about unconventional families, put this one on your list.

One Plus One was out in July. Review copy from NetGalley. 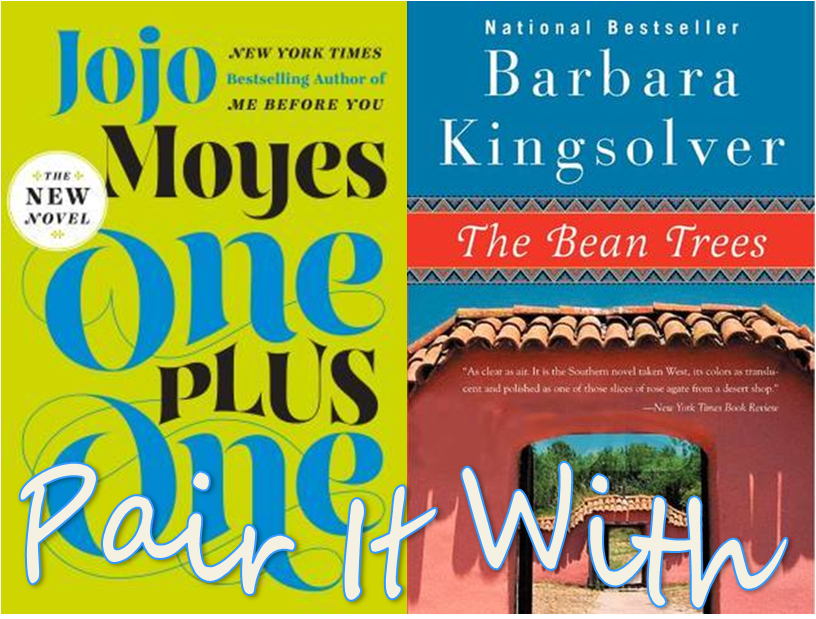 Taylor Greer grew up in rural Kentucky where it was a feat that she graduated high school without getting pregnant. Taylor, ready to leave her old life behind, takes off in a barely functioning car. Then in Oklahoma she acquires a three-year-old Cherokee girl called Turtle. When her car breaks down in Tucson, Taylor knows it's the end of the road.

The Bean Trees, like One Plus One, is about an unconventional family. Taylor and Turtle become part of a community that is much more than just a bunch of neighbors. Taylor, like Jess, is an optimist even in the midst of difficulties that would cause many to sink with despair. Taylor has a good heart and a free spirit. She is accepting and open-minded. She loves her unusual child, just as Jess declares she's got lucky with her two kids.

Barbara Kingsolver's book  also has a lot of regional flavor. It is kind of a love letter to the Southwest.