Pair It With: The Mark of the Dragonfly and Plain Kate

Plain Kate and The Mark of the Dragonfly remind me of one another because they both feature orphaned girls who have a talent to make or fix things, a talent is more than just skill. In each story, the girls join up with a band of misfit travelers.

Piper is an orphan and a talented machinist. She can fix anything mechanical device that comes her way, and sometimes machines will only work for her. Piper lives in a world where meteors crash to the earth bringing artifacts from another world. During one of these meteor showers Piper finds a girl with a dragonfly tattoo, a mark that indicates that she's protected by the king. The girl awakes once they have returned back to Piper's home, and, although she can't remember much from her past, she does remember that she is terrified of the man who comes to claim her. Piper and the girl escape and jump the 401, a beautiful train run by a fascinating cast of characters.

The Mark of the Dragonfly is kind of steampunk for kids. It has lots of cool technology and a little bit of magic. Jaleigh Johnson's world is really interesting. Because this is a book for children, the world is not not quite as fully formed as they typically are in adult books, but I would love to know more about it. Piper is a pretty fun character, and the connection between her and the girl she rescues is quite strong. I especially loved the workers on the 401. Each one has a talent of his or her own. 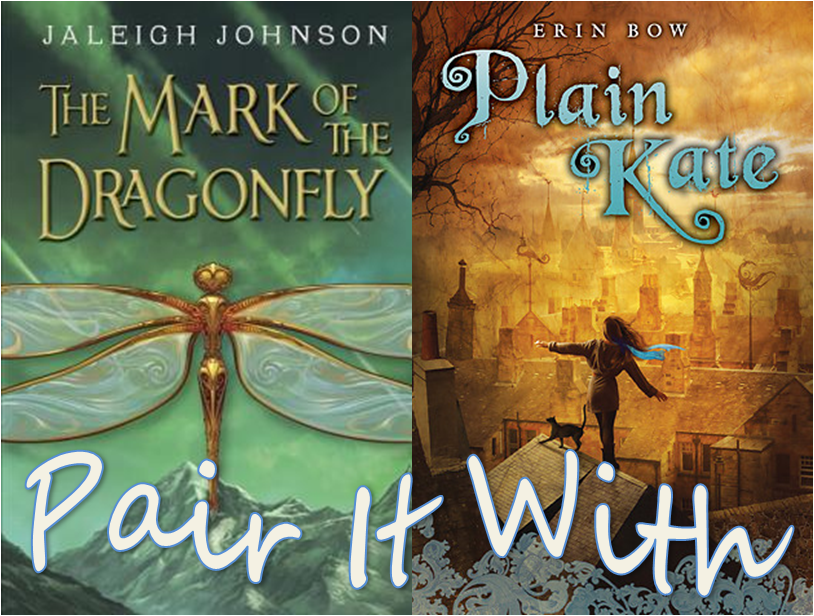 Plain Kate is an orphan. Her father died from the witch fever that has hit many. Along, Kate attempts to eek out an existence living in her market stand. Kate is an exceptional wood carver, a skill that could serve her well if she didn't live in a world where people are wary of her talent. Some even say she's a witch, but Kate is not a witch. She's met a real witch who has stolen her shadow. Forced from the town, Kate joins up with a band of Roamers.

Kate is a clever and resourceful character. Erin Bow's novel is dark and gritty. Kate's troubles seem to never end. There are torturings, witch burnings, dark magic, blood sacrifice, hunger, and loneliness. The very best part of the novel is Kate's talking cat, Taggle. Who has a great name and a dry wit. The love between the two is a bright spot in a world full of sorrows.

I love Erin Bow's writing. The language in Plain Kate is beautiful, and the writing adds so much to the story. I love a story with a rich atmosphere, and Plain Kate certainly has one. The Old World, gypsy feel adds much to this story.

Email ThisBlogThis!Share to TwitterShare to FacebookShare to Pinterest
Labels: books, middle grade, Pair it With