This series has been a wild, intense ride full of so many ups and downs and raw emotions.
A true tour de force. 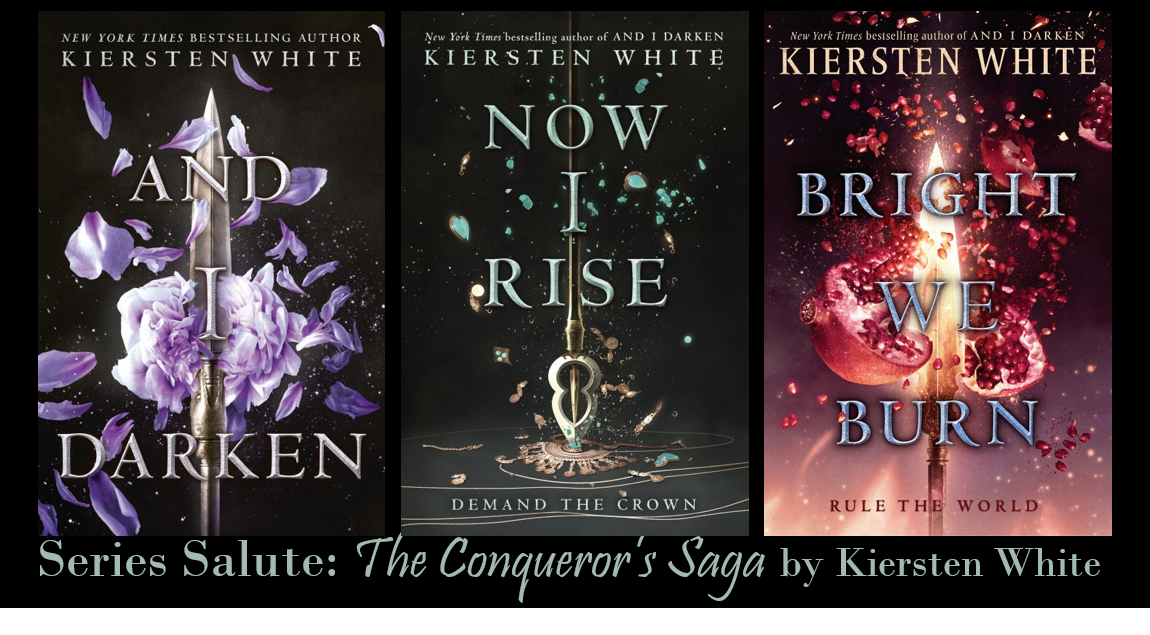 With this series, Kiersten White recasts Vlad the Impaler as a girl, Lada Dragwlya. Vlad III, known for his ruthlessness, is most famous for being the historical inspiration for Dracula. Lada, in turn, is ruthless, smart, and fierce. She has a viciousness that is rather terrifying. You don't read about too many girls like her. The series closely follows the historical events of Vlad's life. Lada and her brother are ransomed by their father to the Ottomans. There they come of age, and befriend the future Sultan, Mehmed. Lada nurses an intense desire to take back the throne. Radu, on the other hand, embraces life with the Ottomans. And Mehmed will let nothing get in the way of his crown and his desire to conquer Constantinople.


Why I Love Them

1. The Historical Setting:
I love the setting and time period. It's not a common one for historical fiction, and it is so fascinating, dynamic, and brutal.

2. Politics:
From scheming to get Mehmed on the throne, to plotting the siege of Constantinople, to retaking the Wallachian throne and the ensuing conflict between Mehmed and Lada there's so much at stake.

3. A High-Stakes Love Triangle:
Love triangles get a bad rap these days, but a well-done love triangle is pretty grand. The love triangle between Lada, Mehmed, and Radu is intense. The stakes are so high. You just know something has to give.

4. Complicated Characters:
Every one of our three main characters is so complicated. There are betrayals upon betrayals in this series, and all of the main characters do such terrible things. Finally, Ms. White handles subtleties and complications so well. The desire for power, the role of religion, the cost of love are all deftly crafted.

5. Lada and her Janissaries:
Lada is tough, strong, single-minded, and incredibly intense. She marches to Wallachia with a group of Wallachian Janissaries (compatriots who were taken from their home and trained as elite soldiers by the Ottomans). I loved the camaraderie between Lada and her men.

6. Radu's Family:
Radu is my favorite character in this series. He is definitely the most compassionate of the three main characters (not that he has much competition). I also really love Radu's family. Nazira is the best. And Fatima. And also Cyprian.

7. Mehmed:
We couldn't have the series without Mehmed, and I really enjoyed his character and his antics in book one, but, honestly, he is kind of the worst.

8. The Siege of Constantinople:
Radu and Nazira's time in Constantinople was among the most emotional depictions of war and conquest that I've ever read. Because Radu is able to see the humanity and goodness in these supposed enemies, he is torn and broken and so is the reader who is privy to the tragedy of it all.
9. Exploration of Social Issues:
Honestly, this is where this series goes from good to excellent. Kiersten White explores issues of gender equality, sexuality, religion, and familial relationships in such a sophisticated and unflinching manner.

10. The Audiobook Narrator:
I would be remiss if I didn't mention Fiona Hardingham's inspired performance of these books. Her narration added so much raw emotion to the story. It's truly stellar.