Pair It With: Saints and Misfits and That Thing We Call a Heart

In this Pair It With I've brought together two books that feature Muslim-American teens. Both books are own voices and feature main characters who fall in very different places on the faith spectrum. I really loved both.

Saints and Misfits by S.K. Ali

Source: ARC from Publisher via NetGalley


Janna Yusuf is not sure she fits in anywhere. As an Arab Indian-American hijabi teenager she definitely stands out at school. And her divorced parents, Flannery O'Connor obsession, and crush on a non-Muslim friend from school, make her wonder about her place in her tight-knit Muslim community as well. One thing she does know is that her best friend's cousin is a monster masquerading as a saint, but will she have the courage to say something? Will anyone believe her when he seems so perfect on the outside?

I loved this debut from S.K. Ali. Saints and Misfits is a classic coming-of-age story. Anyone can relate to Janna's tale because her struggles over who she is and who she wants to be are a universal part of growing up. At the same time, I really enjoyed reading a story set within a Muslim community. S.K. Ali so effortlessly brings the reader into Janna's world. The contemporary YA scene is branching out more and more with diverse characters and viewpoints, and this story is such a lovely addition to that direction and an important one as well. I'm always happy when I find a book that treats faith and faith communities with realism and respect.

Janna's story works so well because she is so honestly herself.She's a fantastic narrator with a strong voice and a distinct personality. Saints and Misfits is populated with side characters who the reader can't help but love. And I really enjoyed watching Janna reassess her initial impressions of many of them.

Also, I absolutely love the cover of this book. The ombre and the script are gorgeous, and I am so happy that they put a hijabi teen on the cover. 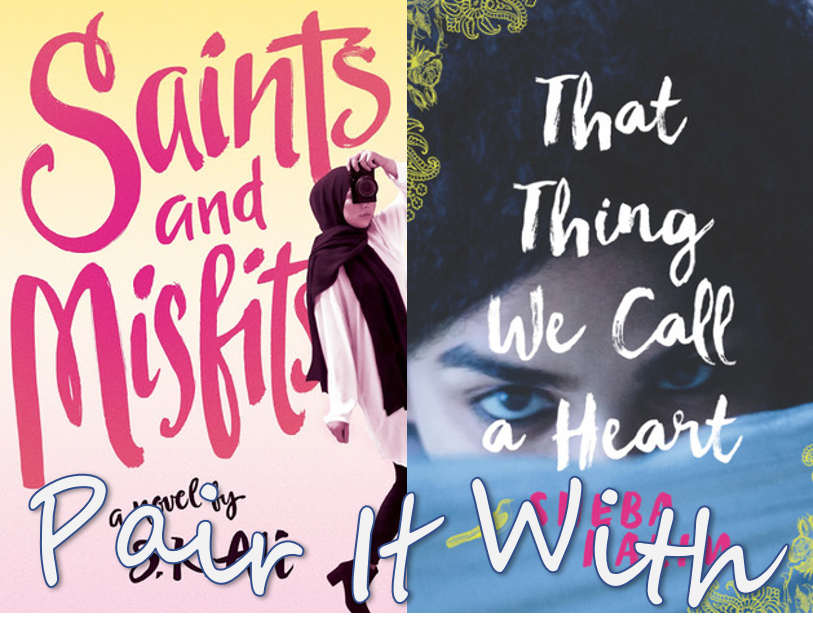 That Thing We Call a Heart by Sheba Karim

Source: ARC from Publisher via Edelweiss


Shabnam Qureshi is a Pakistani-American teen growing up in New Jersey. As the story begins, Shabnam's relationship with her best friend Farah is rocky. The reason is that Farah started wearing hijabi without discussing it with Shabnam. Shabnam, who is Muslim but not particularly religious, is worried that this means that she and Farah might be growing apart, and she struggles to understand why Farah would make such a big decision without discussing it with her first. Does this mean they aren't as close of friends as Shabnam thought?

Shabnam then begins a relationship with Jamie, a boy who scores her a job at his aunt's pie shack. Jamie finds Shabnam fascinating, and Shabnam falls for him pretty hard, but Farah is less certain about Jamie's intentions.

That Thing We Call a Heart is a complicated book in the best way. Shabnam is not a wholly likeable character. She makes some pretty hurtful decisions and can be self-centered. Farah can be judgmental and lack understanding, and Jamie has suspicious motives. These flaws make Sheba Karim's characters feel like real people who are making real mistakes.

The complications in That Thing We Call a Heart also have to do with Shabnam's position when it comes to faith and culture. Shabnam is very disconnected from Islam and Pakistan. The theme of The Partition of India and refugees that runs through the book is one way that Shabnam begins to open her mind up to her heritage (albeit with lots of starts and stops and missteps).

I love that Sheba Karim tells the story of a girl like Shabnam. People are all over the map when it comes to faith of any kind, and Shabnam's voice is one I appreciated.

Email ThisBlogThis!Share to TwitterShare to FacebookShare to Pinterest
Labels: books, own voices, Pair it With, We Need Diverse Books