The Story Continues: A Crown of Wishes, Wayfarer, and The Ship Beyond Time

So many excellent sequels have come out this year, and the three we have for you today are all just divine. Have you read any of the books in these series? What did you think of the sequels?

You can find our feature of the first book in these series here and here. 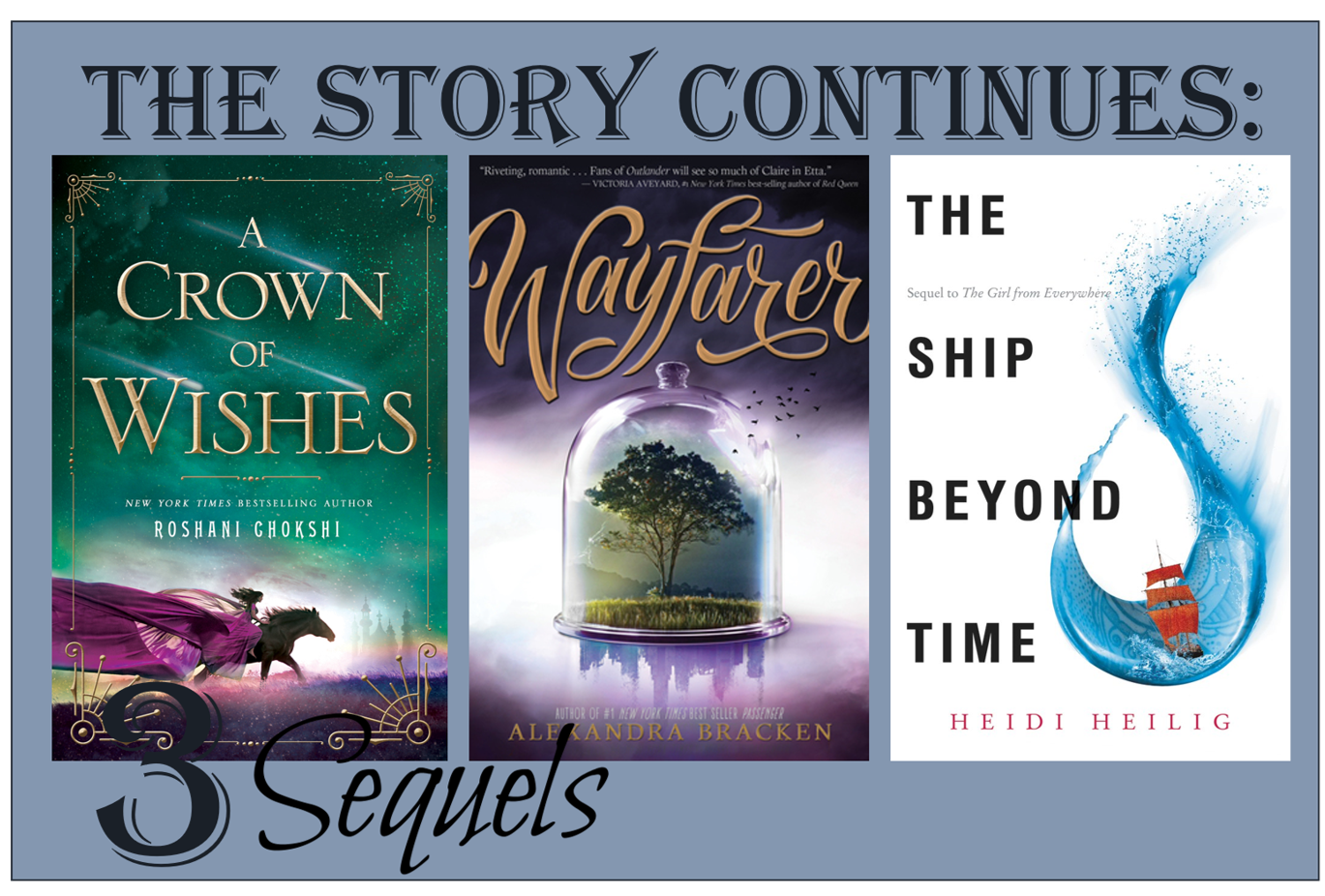 A Crown of Wishes by Roshani Chokshi


The Star-Touched Queen was one of my favorite reads of 2016. The story was intricate, the setting rich, and prose beautiful.When I heard about the sequel, I was a little confused. Where was she going to take our characters now? But when I learned A Crown of Wishes was a companion novel that followed Gauri, that's when I got excited.

Gauri has enemies everywhere. The ruler of Bharata, her brother, wants her dead and so do the leaders of Ujijain, where she is imprisoned. When she is called for an audience with Vikram, the prince of Ujijain, however, things change. Together, Gauri and Vikram embark on an adventure to compete in the Tournament of Wishes and win the hearts of their people.

Once again, Roshani Chokshi captured me with the amazing places our characters encounter. The magical realms are rich, vast, and somewhat terrifying, as are the magical beings that inhabit them. I loved the way the stories of magic wove together and the unexpected twists they created in the end of the story.

Gauri and Vikram were both well-crafted, interesting characters. I loved Vikram's sense of humor and was simply delighted to see who Gauri became after losing her sister in the first book. We were introduced to many new characters in this book. The Lord of Wealth and Treasure keeps you on your toes. Aasha was my favorite new character. She was a true fighter.

This book had many themes that really resonated with me, including stories, hopes, dreams, desires, and wishes. A Crown of Wishes is as lovely a read as its predecessor.


Wayfarer is the sequel to Alexandra Bracken's highly anticipated  Passenger of last year. I love time travel novels, so it was an easy sell for me.

In Passenger, Etta Spencer learns that she is a member of a time-traveling family and because of her genetics, capable of time travel. She and fellow time traveler Nicolas Carter are compelled to travel through time in order to find a stolen and powerful time-traveling artifact.

I thought that Passenger was a lot of fun, but it definitely has a slow start. There is quite a bit of explanation and background that has to be established before Etta can even begin her time traveling adventures. After all, she didn't even know that time travelers exist. It also had a crazy anxiety-producing cliffhanger.

Wayfarer begins not too long after the conclusion of Passenger, and the reader is thrown directly back into the world. I actually really loved Wayfarer. I liked it more than the first in the series. This second book is a bit more fast-paced because all the groundwork has already been laid. It does, however, see our two main characters split up for most of the book. I wondered if for certain readers who are very invested in Etta and Nicolas's romance the distance was too much.

I love so many of the secondary characters that I didn't miss the interaction between Nicholas and Etta too much. Spending more time with Sophia was an absolute ball, and Julian Ironwood was an unexpected treat.

Another thing I liked about Wayfarer was the realization that Etta and Nicholas are up against a more insidious force than the Ironwood family. This upped the stakes in a much appreciated way.

Much like the first book, Wayfarer takes our characters all over the world as they travel through time--from the Vatican catacomb of Old St. Peters, to a besieged Carthage, and a early 20th-century San Francisco.

The Passenger series is not as mind-boggling as some other time travel series I've read. Personally, mind-boggling time-travel conundrums have never turned me off of a book, but, because this series is light on headache-inducing paradoxes, I'd recommend it even if you don't have a proclivity for time travel.

The Ship Beyond Time by Heidi Heilig

Source: Review copy from the publisher through Edelweiss


Last year we featured Passenger and Heidi Heilig's debut, The Girl from Everywhere in the same post. It seems only fitting to bring these two time travel tales together again.

I love the way time travel works in Ms. Heilig's series. To travel, the crew must obtain an original, hand-drawn map. Using that map to navigate allows the travelers to journey to the year the map was made.

After their adventures and misfortunes in Hawaii in book one, Nix is ready to take the helm as a full-fledged Navigator. Until, that is, she learns that she is destine to lose the one she loves to the sea. Some strange run-ins during a stop in her father's native time in New York City, set Nix on a course that she hopes will change her fate.

In The Ship Beyond Time, the crew travels to a mythical island off the coast of Brittany. I absolutely love this element of Ms. Heilig's world--because time travel is done through maps, a Navigator can take his or her ship to a land of fantasy provided the original mapmaker believed that place existed.

I absolutely devoured The Ship Beyond Time, and, once again, I liked it better than the first book in the the series. I loved seeing how the myth and reality mingled and how the fairy tale story continually bubbled to the surface despite all attempts to thwart it.

The Ship Beyond Time does have quite a bit of the mind-boggling time-travel paradoxes that I love, and it was so fun to see how the author brought history and mythology together.


A Crown of Wishes reviewed by Paige.
Wayfarer and The Ship Beyond Time reviewed by JoLee.