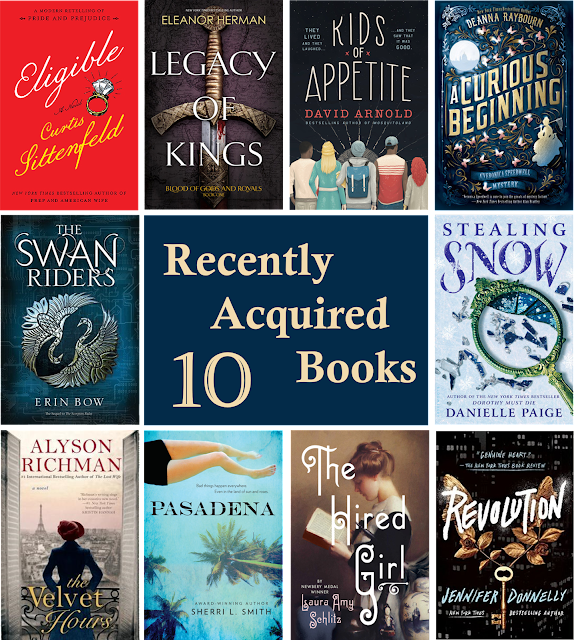 
Eligible by Curtis Sittenfeld:
I heard about this book both on the What Should I Read Next podcast (I'm mildly obsessed with it) and on Margot's June Book Haul. I immediately put it on hold. It's a modern retelling of Pride and Prejudice that involves reality TV, Cincinnati, and all the pride and prejudices you'd associate with the modern era. I found it to be quite entertaining.

Revolution by Jennifer Donnelly:
I've been meaning to read this book for ages. I finally got the audiobook from Overdrive, and, although it took me a while to get into it, by the end I was thoroughly convinced that this book is every bit as stunning as everyone said it was.


Legacy of Kings by Eleanor Herman:
Here's another book I've been meaning to read for quite some time, and, when I saw there was an audio version, I knew that was the way to go. I've always been interested in Ancient Greece and mythology, and found this to be an intriguing alternate history. (Also featured here.)

The Hired Girl by Laura Amy Sclitz:
I almost listened to this entire book in one day. It's set in Baltimore in the early 1900s, and I live near Baltimore, so that was definitely part of the appeal. (Also featured here.)


A Curious Beginning by Deanna Raybourn:
I won a copy of this book in a contest run by Angie over at Angieville. I've read nearly all of Deanna Raybourn's books thanks primarily to Angie who first introduced me to Ms. Raybourn's Lady Julia series. So pleased to add this one to my collection. (Also featured here.)


Kids of Appetite by David Arnold:
I haven't yet read David Arnold's debut, Mosquitoland. Because it was universally praised, I definitely want to read something by him, and I'm excited to check out his second novel. (Out September 20, 2016)

The Swan Riders by Erin Bow:
Paige and I did a Long-Distance Book Club post for the first in this series. It is set in an unpleasant future with sentient artificial intelligence. I'm interested to see what happens now that Greta is one. (Out September 20, 2016)

Stealing Snow by Danielle Paige:
Here's another author that I've heard a lot about an have yet to read anything by. I'm always up for a good fairy tale retelling, and this one about how the Snow Queen became a villian sounds intriguing. (Out September 20, 2016)

The Velvet Hours by  Alyson Richman:
This novel is set during World War II in Paris, and it was inspired by the true account of an abandoned Parisian apartment that contained quite a lot of art. And you know how I feel about art. (Out September 6, 2016).

Pasadena by Sherri Smith:
Set near Hollywood, Sherri Smith's novel pays homage to noir mysteries. It's always fun to read a good mystery now and then, and I love anything that's a bit stylized. (Out September 13, 2016).
Posted by JoLee at 10:30 AM