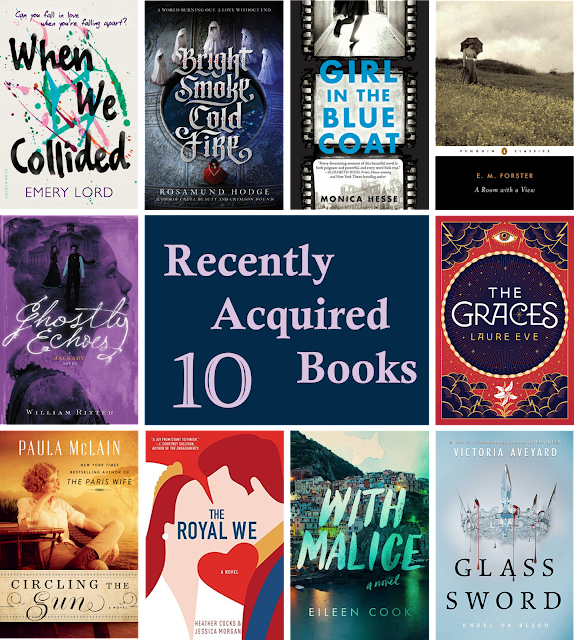 
When We Collided by Emery Lord: I read Emery Lord's debut, Open Road Summer, before it was released, and it was such a great find. I've been following her newest publications ever since. When We Collided came out in April of 2016, and I recently picked it up from the library.

Circling the Sun by Paula McLain: I really am enjoying this trend of writing fiction based on the lives of extraordinary historical women. Circling the Sun is about Beryl Markham, airplane pilot, racehorse trainer, and African colonist. (Featured here)

Glass Sword by Victoria Aveyard: I read an early copy of Red Queen last year, and I just had to know what happens next. Glass Sword has some second-book problems, but I finished it wanting more, which is always a good sign.

The Royal We by Heather Cocks and Jessica Morgan: The story of an American girl who falls in love with the heir to the British throne. I don't know a whole lot about this one, but I do know that Janssen over at Everyday Reading loved it.


Girl in the Blue Coat by Monica Hesse: I picked this one up during an Audible sale, and I am so glad that I did. I really enjoyed this book. It's the story of a group of young people who are part of the Nazi resistance in Amsterdam during World War II. I highly recommend the audio version.

A Room with a View by E.M. Forster: Here's proof that I sometimes read classics. A Room with a View was the book club pick for May, and I absolutely adored it. It's so funny in that fusty early-20th century British way.


With Malice by Eileen Cook: A teenage girl wakes up in a hospital room and can't remember the last six weeks of her life, including the accident that killed her best friend. This sounds like a fast-paced thriller, and I recall that Eileen Cook's last book also involved memory loss. Interesting... (Out June 7, 2016)

The Graces by Laure Eve: The Grace sisters are captivating, wealthy, and glamorous. They are also said to be witches. This book sounds like a really fascinating mash-up of a couple of popular YA themes. I'm definitely eager to crack it open. (Out September 6, 2016)

Bright Smoke, Cold Fire by Rosamund Hodge: I've read all of Hodge's books to date. Her first, Cruel Beauty, is a retelling of Beauty the Beast and her second recasts Red Riding Hood. She excels at world-building, and I can't wait to see what she does with Romeo and Juliet. (Out September 27, 2016)

Ghostly Echoes by William Ritter: This newest book in the Jackaby series is my most-anticipated book of the summer. This series is clever and spooky, and I so excited to find out what happens next. (Out August 23, 2016)