Blog Tour: Lies I Live By by Lauren Sabel and other Girl Spies

Welcome to the next stop on the Lies I Live By blog tour! Callie, from Lies I Live By, is a psychic and a government spy. To celebrate the release of this fabulous espionage-filled book, we have gathered nine additional YA books that feature girl spies. We have girl spies in historical fiction, steampunk, fantasy, and contemporary. Truly something for everyone.

It felt like the sky was the limit with this topic, and I had a hard time narrowing down the list to just ten girl spies! So, if you have a favorite spy novel, please share it with us in the comments!

And, don't forget to enter the giveaway below. We are giving away THREE finished copies of Lies I Live By! Best of luck! 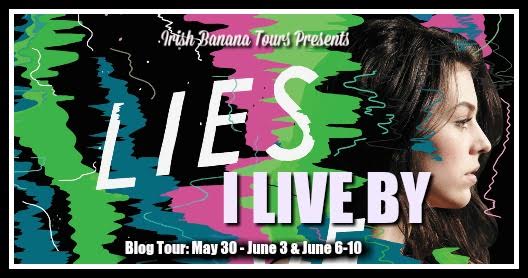 Lies I Live By by Lauren Sabel


Callie Sinclair is literally out of her mind; as the government’s youngest psychic spy, she finds valuable information for top-secret missions. Her work keeps her headaches at bay, but it means she must lie to everyone she loves, including her longtime boyfriend, Charlie.

When a new psychic arrives at the office, Callie can’t help but flirt; Jasper already knows her in a way Charlie never will. But as her love life gets more complicated, so do her visions. People halfway around the world seem to be in danger...and people in her own backyard, too. If Callie can’t find a way to alter future events, she could lose the people she loves—and her mind. Literally. 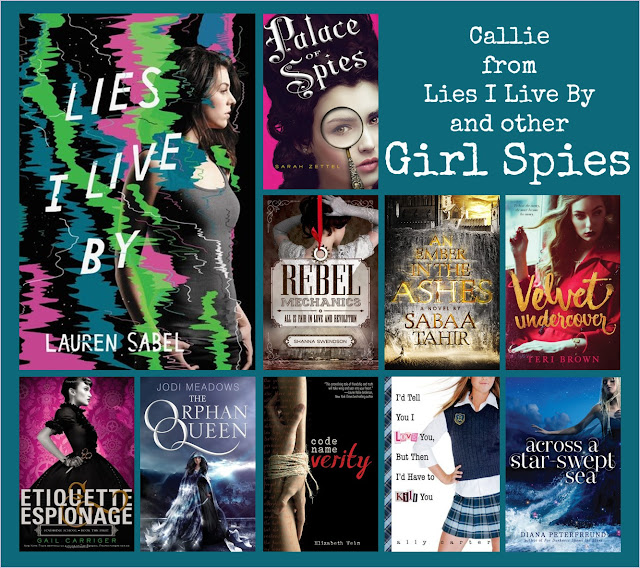 Callie from Lies I Live By by Lauren Sabel:
Callie is the youngest psychic spy in the San Francisco office, but keeping her work a secret is especially challenging for a teenager living at home. I really liked how Callie was an official government agent, but that she is also not against bending the rules a bit when it comes to protecting her loved ones. The psychic powers are definitely a fun twist on the traditional spy novel.

Peggy from Palace of Spies by Sarah Zettel:
Peggy poses as a lady in waiting to Princess Caroline in the court of George II of England where she becomes embroiled in court politics. I am always up for court intrigue, and Sarah Zettel's series is just a lot of fun. It's set during an interesting period of history, and it inspired me to do a bit of research into the Jacobites and the Hanoverian era.

Verity from Rebel Mechanics by Shanna Swendson:
In this alternate history, the British still rule the American colonies in 1888. Verity Newton uses her position as governess for a upper class family to spy for the rebels who hope to overthrow the magic-wielding British with steam-powered machines. I love a good alternate history, and I thought this one, with its great characters and interesting premise, was a lot of fun.

Laia from An Ember in the Ashes by Sabaa Tahir:
After Laia's brother is taken by the Martials, Laia seeks the help of the rebels, but their price is steep: she must spy on the Commandant, the head of Blackcliff Military Academy, for them. And let me tell you, the Commandant is insanely scary and violent and basically a complete nightmare. This book is addictive, and the sequel comes out in August, so now's the perfect time to jump on this bandwagon.

Samantha from Velvet Undercover by Teri Brown:
Near the beginning of the Great War, Samantha Donaldson is recruited by La Dame Blanche to infiltrate the court of Kaiser Wilhelm II. Her mission is to extricate another LDB agent. Among the many complications is the the fact that Samantha only knows the agent's code name: Velvet. WWI historical fiction definitely takes a back seat to WWII fiction, and I enjoyed reading about an earlier era.

Sophronia from Etiquette and Espionage by Gail Carriger:
When Sophronia Temminnick's mother enrolls her daughter at Mademoiselle Geraldine's Finishing Academy for Young Ladies of Quality, she doesn't know that the school really exists to train young ladies for covert operations, and that Sophronia is their ideal recruit. Carriger's Finishing School series is the epitome of a riotously good time. With steampunk perfection, boarding school antics, and a cast of clever and humorous characters, this is a series for every spy-girl lover.

Wilhelmina from The Orphan Queen by Jodi Meadows:
Wilhelmina Korte is an outlaw, but she should be a queen, and she has a plan to take back her kingdom. For the first step, Wil and her best friend Melanie infiltrate the palace posing as refugees from Liadia. There, as spies, they will gather the information they need to launch their attack. There's so much good stuff in this book: illegal magic, a deadly magical fog, a dying king, a stuck-up prince, a handsome guard, and the Black Knife, a vigilante who fights crime in the city of Skyvale.

Verity from Code Name Verity by Elizabeth Wein:
Set during World War II, Elizabeth Wein's tells the story of spy Verity and her best friend Kittyhawk. Trapped in Nazi territory on the wrong side of the English Channel, Verity, in order to buy time, draws out her interrogation by writing the story of their friendship in the guise of a confession. All the praise you've heard about this book is well deserved. The writing is superb. The action is harrowing and horrifying. The friendship is so real. This book is crazy good.

Cammie from I'd Tell You I Love You, But Then I'd Have to Kill You by Ally Carter:
The Gallagher Academy may look like a typical boarding school for upper-class families but, in reality, it is a spy-training school. The Gallagher Girls Series is six books strong, and it chronicles the education, adventures, and misadventures of Cammie Morgan and her friends from her sophomore year to her senior. The Gallagher Girl novels are fun and quick reads. They also get increasingly more sophisticated as the series progresses.

Persis from Across the Star-Swept Sea by Diana Peterfreund:
In a gender-swapped retelling of The Scarlet Pimpernel set in a post-apocalyptic world, Persis Blake is the Wild Poppy, the greatest spy of her time, but no one would ever guess it due to her carefully constructed Persis Flake persona. This book is a true beauty. Peterfreund's worlds are so intricate, interesting, and well-described. Her characters are smart and incredibly complex. The whole thing comes together just beautifully. 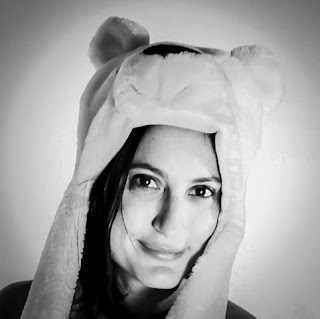 Originally from the Rocky Mountains, Lauren Sabel has returned to the cool mountain air of Boulder, Colorado after living in several wonderful cities that she will always love and continue to visit year after year.Lauren loves her husband, her family, her friends, and stories that end happily. (Unfortunately, hers never do.) She also loves digging into her mind and revealing tiny gems she didn’t know were there. Lauren learned to mind dig while getting her MFA in Creative Writing from Naropa, a Buddhist college in Boulder, Colorado. Before Naropa, Lauren studied film in Rome, where she developed her love of crypts and other beautiful creepy things. She also worked in the film industry in New York and San Francisco, focusing mainly on film festivals, as she can never pass up a good party. In San Francisco she worked for Chronicle Books, where she was inducted into the fascinating world of book publishing. For the past eight years, Lauren has been teaching college students the joys of creative writing, whether they like it or not.In 2008, Lauren was published in Undiscovered Voices, an anthology of the best new writers for children in the U.K., where she was living at the time. Then life got very exciting very quickly. She signed with Jodi Reamer Esq. at The Writer’s House Agency in New York, and they made magic happen, and that magic is named Katherine Tegen. (aka: Katherine Tegen Publishing, Harper Collins).Lauren's first book, Vivian Divine is Dead was published June 3 2014. She's currently working on her next book, which she can't wait to tell you about (but has to wait just a little while anyway).Lauren believes that being a teenager is an act of courage, and is proud of anyone who manages to stick through it, despite the pain. :)