Here's a series that I never would have read if I hadn't become a book blogger and not reading this series would have been a sad, sad mistake. When I received a galley of The Perilous Sea I wisely found myself a copy of The Burning Sky and caught up. Then I couldn't stop talking about this series. The final book in The Elemental Trilogy, The Immortal Heights, comes out on October 13th, 2015, and we thought this would be the perfect time to sing praises to this fantastic fantasy series. 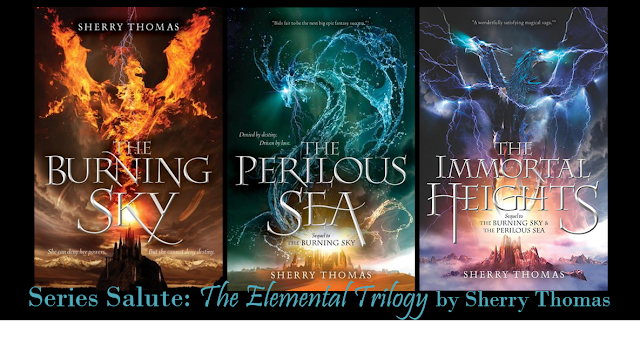 In The Burning Sky we are introduced to Iolanthe Seaborne, an elemental mage. She can control water, earth, and fire. Prince Titus VII has been looking for the elemental mage who prophesy says will help rid the world of the Bane and release the people from the shackles of New Atlantis. The Elemental Trilogy is their story. It tells of Titus's discovery of Iolanthe and the subsequent training, trials, and close calls.

The second book in the series, The Perilous Sea, is action packed. It begins with Iolanthe and Prince Titus lost in the Sahara desert and missing many of their memories. Then it swings back to seven weeks prior when Titus and Iolanthe (as Fairfax) return to school at Eton. The chapters then alternate between Eton and the Sahara. In one location, the main characters face dangerous obstacle after dangerous obstacle. In the other, they make mind-boggling discovery after mind-boggling discovery.

In the final book, The Immortal Heights, Titus and Iolanthe set off on a mad dash to get to the Bane before he gets to them. Wow. This book is action-packed, and it hold plenty of surprises. It is a very satisfying conclusion to this wonderful series.

I love a lot of fantasy series, but I think there is something extra special about Sherry Thomas's The Elemental Trilogy.

So what's to love? Well, I laid it all out in this short list.

1.  The real world and the magical world collide.

Sherry Thomas's world building is quite intriguing. The world is physically divided between mage and non-mage lands. Titus travels back and forth between the two because he attends school at Eton. Non-magically peoples have no idea that magic exists.

2. It's an alternate history.

Once we travel to Eton we learn that it's 1883. Costume drama time. Plus, who doesn't love a good boarding school setting? I love all those boys at Eton.

Iolanthe attends school with Titus as Archer Fairfax, and she makes a very convincing boy.

Titus is a prince in name only. He has gotten very good at acting like a stuck-up fop so that Atlantis won't suspect he is planning rebellion. And, as the series develops, the political intrigue gets thicker and thicker.

I love what Sherry Thomas does with this most head-spinning aspect of her world. Princess Ariadne's diary is one of two remarkable books in the series. As one would expect, prophecies aren't always straightforward.

The Crucible, the other amazing book in the series, is one of the coolest training facilities I've ever seen in fantasy fiction. And then it turns out to be so much more.

The Inquisitor. Shudder. The Bane. Shudder.

Elemental magic is so freaking cool. Iolanthe is  incredibly powerful, and Titus has spent his life training. He's got quite a few tricks up his sleeves.

10. These books plug the hole in my heart left by Harry Potter.

I'm not saying that Sherry Thomas's books are exactly like Harry Potter but just that I think they will appeal to fans of that most-beloved wizard.