We are doing The Broke and the Bookish's Top Ten Tuesday again this week. Today's topic is Ten Hyped Books I Haven't Read. I have heard so many good things about all of these books. And, while some are higher priorities than others, I have nothing against reading any of them. 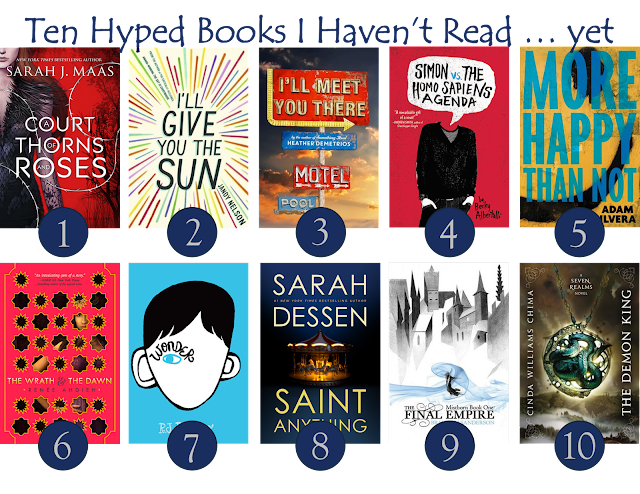 A Court of Thorns and Roses by Sarah J. Maas: Doesn't it seem like everyone has been raving about this book? Confession: I'm a little late to the Sarah J. Maas party. I didn't read Throne of Glass until this year. I'm now on Heir of Fire and enjoying it pretty well, but I'm not sure I'll ever be a Maas superfan. However, I see myself reading this one in the future because I have a Beauty and the Beast post in the works.

I'll Give You the Sun by Jandy Nelson: This one got the Printz award last year, and if that's not hype I don't know what is. Also, lots of trusted friends loved this one. I hope I get a chance to read it someday.

Simon vs. the Homo Sapiens Agenda by Becky Albertalli: This one just might be the YA debut of the year, and I haven't read it.

More Happy Than Not by Adam Silvera: Another highly hyped debut, Adam was even on Epic Reads' Tea Time. I tried so hard to get an advanced copy of this book and failed at every venture. So, I'm waiting to get it from the library, and the processing is taking forever.

The Wrath & the Dawn by Renee Ahdieh: I was going to let this highly hyped retelling of 1001 Arabian Nights pass me by, but I've seen so many absolutely glowing reviews that I don't know that I can do that anymore.

Wonder by R.J. Palacio: I feel like the only person who hasn't read this book. My book club discussed it on a day that I was out of town, so I just didn't read it, and I probably should have.

The Demon King by Cinda Williams Chima: I've been meaning to read Chima's Seven Realm's Series for years. Years. All my friends love these books.


Which of these books should I move to the top of my TBR pile?
Posted by JoLee at 3:31 PM