Pair It With: Death Marked and Shadow Study

Two girls have lost their magic. Separated from the assassins they love, this loss of power makes Ileni and Yelena devastatingly vulnerable. Death Marked and Shadow Study continue the stories of Death Sworn and the well-loved Study series.

I read the first part of Ileni's story last year. Death Sworn takes place in the assassin caves where Ileni, whose magic is disappearing, serves as their tutor.   Ileni came to the caverns convinced that the assassins are pure evil, but once the assassins have a face and a voice, Ileni finds the situation much more complicated.

The situation in Death Marked is similar. Ileni, having left the assassins at the end of book one, goes to the Empire to learn for herself if it's as evil as she's always been taught. She is accepted into the sorcerer academy and, as with the assassins caverns, she finds things aren't quite as black and white as she's been taught. She finds sympathy and camaraderie with some of the students. Plus, Ileni is tempted. She loves being powerful again. And the academy's cache of lodestones fills the emptiness her lost magic left behind. But at what cost? Those lodestones are filled with death.

In Leah Cypess's sequel, Ileni can't seem to figure out who she is. Is she an assassin? A spy? A traitor? Her internal conflict is expressed quite well. Death Marked, on its own merits, is a very lovely book. Well written with powerful characterization and an evocative setting. However, it just doesn't work as a series conclusion. It doesn't feel like an ending. As I neared the conclusion of the book I started to wonder how it could possibly wrap everything up satisfactorily. The answer was that it couldn't. My first thought after finishing was, "that was the end?" I'm not convinced that anything has changed by the end of the book. What's the situation with the assassins and Sorin? It's all left hanging. At the very end of the book Ileni comes up with a way to fix the whole lodestone problem, but Karyn immediately turns it into something sinister. It feels like a set up for more conflict. There's obviously still much more work to be done. How will Ileni and a couple of sorcerers change the entire Empire?  Does Ileni actually have the power to change things?

Death Marked reads like a second book in a trilogy and like a set-up for a powerful concluding third book. I don't know if this series was originally suppose to be a trilogy or if Leah Cypess is trying to upend the fantasy genre with a quieter, less dramatic, less conclusive ending. Either way, I found the ending painfully unsatisfying, and I'm not sure that I would read a sequel even if there was one. 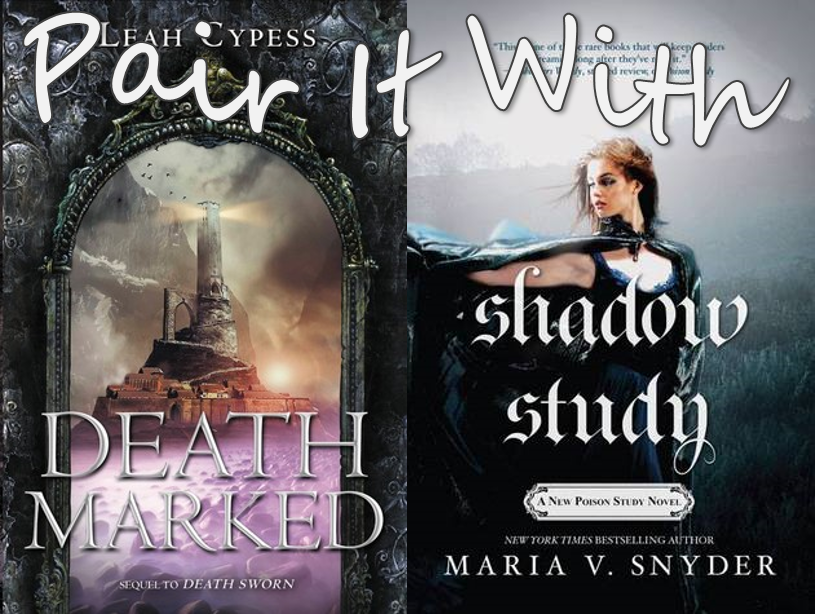 Back in 2008 my friends and I all read Maria V. Snyder's Study series (Poison Study, Magic Study, Fire Study) in quick succession. I am delighted that Ms. Snyder is continuing the series now, several years later, with what looks like at least three more books in the Soulfinder series.

Shadow Study picks up approximately eight years after Fire Study left off. Yelena is the liaison between Sitia and Ixia, keeping the balance between the old enemies. Valek moves back and forth between the two countries and this is how the couple maintains their relationship. The book opens with Yelena on her way to meet Valek. During the journey she is shot by a hidden assassin. All seems well until days later after Valek has already departed. Yelena is hit with a horrible illness and when she recovers her magic is gone.

The chapters in Shadow Study alternate between Yelena, Valek, and Janco. I really enjoyed this about the book. I especially loved spending a little bit more time with Valek. His memories of assassin training and his younger years added so much to his character, and I loved getting to know Valek a little better. Likewise, I enjoyed spending time with Janco. He has a fun personality and his chapters were never dull. Although Yelena, Valek, and Janco seem to be on very different missions, it's clear from early on that the threads of their three stories will come together. It's so gratifying when they do.

For me, the hardest thing about reading Shadow Study was that it's been so long since I've read the other books in the series. You guys, 2008 seems like an age ago. Between then and now I've had two children. The oldest is now five. I wrote a dissertation and finished my PhD. I've moved three times. 2008 was like another lifetime ago and remembering anything but the very basics of the Study series was just not possible. Also, I never read the Glass series that features Opal Cowen or any of the three Study series short stories. Shadow Study seems to do a great job bringing the Study series and Glass series together. And, although I was at a slight disadvantage having never read the Glass series, I never had trouble following the story line. Avid Maria V. Snyder fans will love Shadow Study, but if your reading of this world has been a little spotty, like mine, you won't be in over your head.

My one quibble about the story is that the climatic battle takes place off the page. I felt a little disappointed that I had to black out with Yelena and miss the finale.

Overall, this is a great addition to the worlds of Ixia and Sitia. Study series fans are going to be thrilled. Valek fans, especially, will rejoice. Shadow Study has renewed my love of the series. I am so excited that there's more to come.