Pair It With: The Rosie Project + The Rosie Effect and Courting Greta

In the first book in Graeme Simsion's duology, The Rosie Project, genetics professor Don Tillman is searching for a wife. As a highly logical, quirky, and unusual individual, who's likely on the Autism Spectrum, he's taken a very step-by-step approach to this process. However, along the way he meets Rosie and gets swept up in her energy and intensity. Suddenly, instead of working on finding a wife Don's spending all of his time helping Rosie find her father.

Graeme Simsion's sequel, The Rosie Effect, takes Don and Rosie around the world to New York City. Don is a professor at Columbia and Rosie is in school. Life seems to be good for the pair until Rosie announces her pregnancy. Then commences a series of, as Don would call them, disasters.

I ended up really loving The Rosie Effect, but, while I was reading the first half especially, I kind of felt like I was watching a train wreck. One disaster after another conspires to derail (to continue the train metaphor) Don. Then his inability to cope with the problem leads to another disaster. It's a chain reaction that you aren't sure Don's going to survive unscathed. However, in the midst of all these problems, it's so lovely to see how deeply Don cares about his old and new friends. Some of the disasters are caused through the best of intentions.

I didn't really realize how much baggage Rosie carried into this relationship until I was well into this second book. I think some readers could be really, really angry with Rosie, and I kind of don't blame them. I guess it's nice to see how Don and Rosie are fully formed individuals, both with big, possibly relationship killing, issues. It puts them on more equal ground.

As the disasters begin to be resolved in the second half of the book, I no longer felt the need to metaphorically cover my eyes. I feel like Don grew a lot in this book, becoming a caring individual with lots to offer to so many.
I really enjoyed these quirky, charming, humorous tales of a very unusual pair. Graeme Simsion does an fantastic job channeling Don's voice. It's is strong and original and purely Don

The Rosie Effect is out December 30th, 2014 in the U.S. Review copy from Edelweiss. 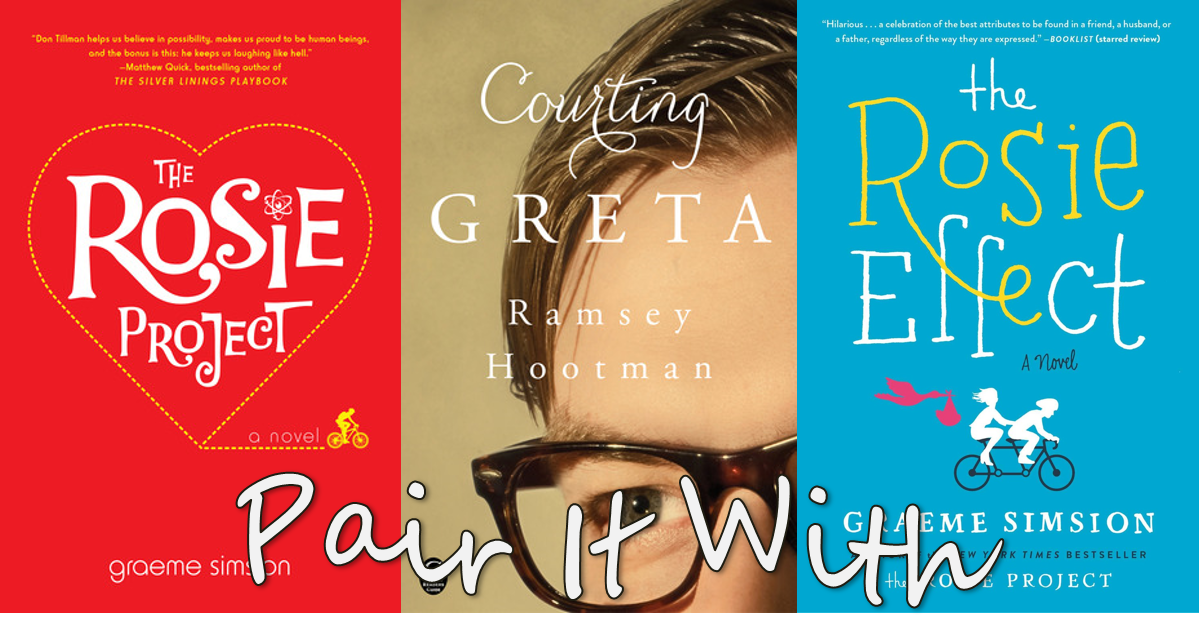 Samuel Cooke of Courting Greta quits his job to become a computer science teacher at a high school in Northern California. His disability makes it necessary for him to use a wheelchair or rely on crutches and leg braces. The challenges of teaching high school students are intensified for Samuel because he is perceived as different.

Greta Cassamajor is a church-going, female P.E. teacher. She is not particularly feminine and so she also often gets stereotyped. Both Samuel and Greta are still healing from really awful, painful pasts.

Samuel falls for Greta. Hard. It's a premise that could lead to a complete disaster--too saccharine or too preachy--but it doesn't. It's pretty fabulous. Ramsey Hootman writes about people, rather than caricatures. Samuel can be horribly self-centered, but he can also be fantastically forthright. Greta is prickly and unbending but also stalwart and loyal. Both Samuel and Greta are obviously so much more than their appearances. In short, they are the type of people that I like to read about, flaws and all. And the relationship is never a forgone conclusion either. I was pulling for these two to succeed in life and in love, but I wasn't sure that was actually going to happen. This is a love story that is worth reading.
Posted by JoLee at 11:44 AM