What if Sleeping Beauty didn't live happily ever after? What if she died leaving two young children and a usurper on the throne? Stacey Jay's Princess of Thorns is the story of what comes after Sleeping Beauty's unhappy end. It's the tale of Sleeping Beauty's daughter, a fierce and resolute warrior, who will do what she must to protect her younger brother and regain her kingdom.

Ms. Jay's story uses Charles Perrault's tale as its jumping off point. In Perrault's story, Sleeping Beauty's mother-in-law is an ogress who enjoys eating children, the prince keeps his bride a secret, and Sleeping Beauty's children are named Dawn and Day. Princess of Thorns features an ogress queen who eats human souls, a king who  hides a second family, and siblings Aurora and Jor.

Aurora's somewhat reluctant ally on her quest is a prince of a neighboring kingdom, Prince Niklaas. He is searching for a way to break the curse that will turn him into a swan on his eighteenth birthday.

I really enjoyed this novel. It started a little slow for me, but as it picked up, I found myself thinking about it more and more. Aurora is feisty and headstrong. Niklaas starts out seeming overly arrogant, but it doesn't take long to realize that it's all bluster. I love when magic has consequences, and that is certainly the case with this tale. Aurora's fairy blessing was one of the most interesting parts of this tale, for me. Sure Niklaas and Aurora should be more honest with each other, but, all things considered, I can't be too hard on them. And really, I quite liked them together. 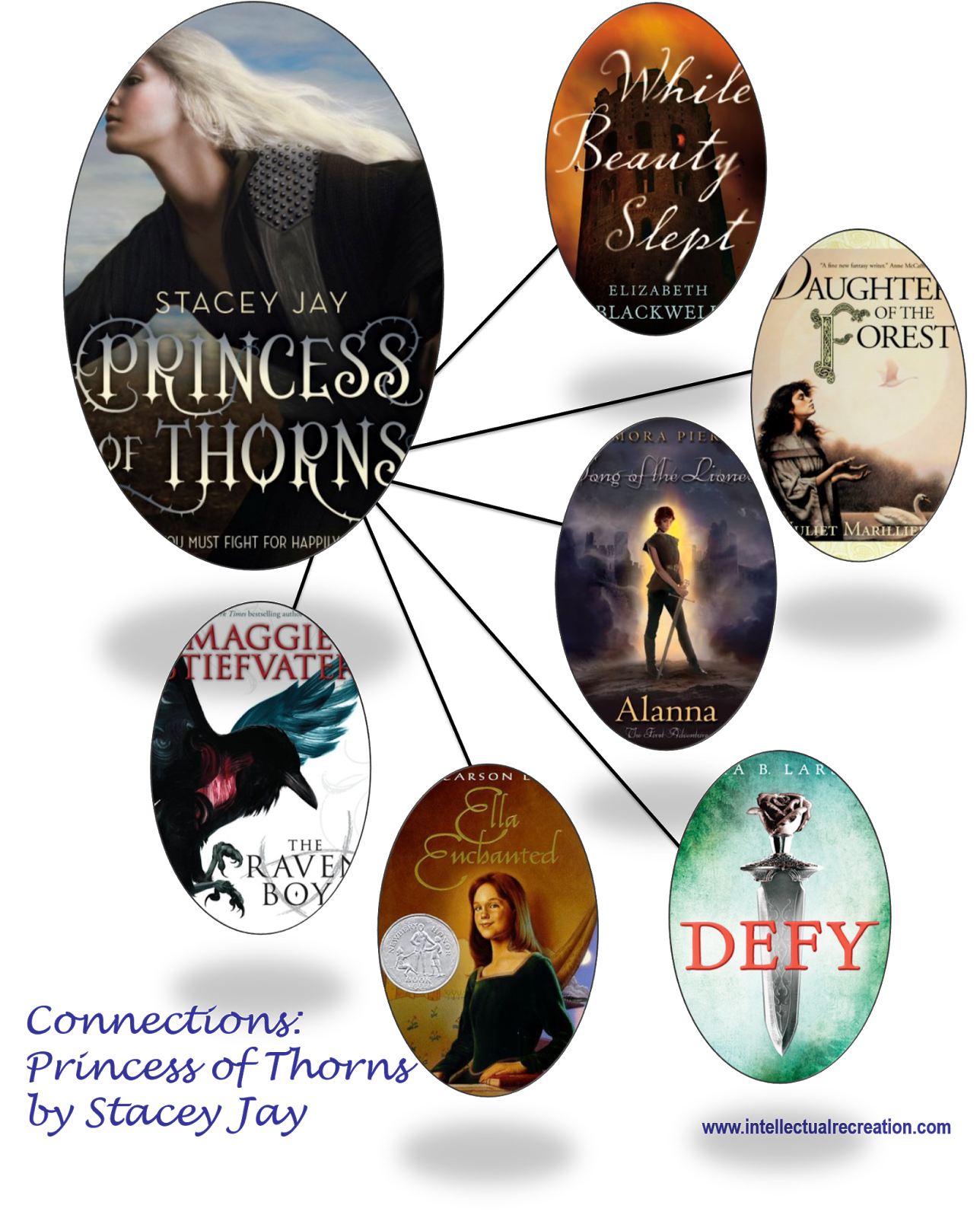 Princess of Thorns is a so many things. It's a fairytale, an epic fantasy, a love story, and an adventure. No wonder it has so many connections to other books:

While Beauty Slept and Princess of Thorns: These Sleeping Beauty spin-offs take another character's perspective--the servant and the daughter.

Daughter of the Forest and Princess of Thorns: Contain elements of The Wild Swans by Hans Christian Anderson, in which eleven princes are turned into swans by their wicked stepmother.

The Song of the Lioness and Princess of Thorns: Girls masquerading as boys!

Defy and Princess of Thorns: Warrior girls with fighting magic.

Ella Enchanted and Princess of Thorns: Is it a fairy blessing or a curse?

The Raven Cycle and Princess of Thorns:  A girl whose kisses are cursed.

Stacey Jay takes all these well-known elements, gives them a twist, and transforms them into some fresh and new.

Princess of Thorns is out December 9th, 2014. Review copy from NetGalley.
Posted by JoLee at 5:02 PM