Pair It With: The Break-Up Artist and Get Even

The books featured in today's "Pair It With" star a student or a group of students who are secretly working against the status quo.

If you are a fan of E. Lockhart's The Disreputable History of Frankie Landau-Banks, you need to give The Break-Up Artist a go.

Becca Williamson is the Break-Up Artist, hired by her classmates to end relationships. Of course, no one knows who the Break-Up Artist is. No one, that is, except Becca's jaded and jilted older sister. Becca's seen firsthand the damage that relationships leave behind. Not only has her sister checked out since being left at the altar, but also Becca's best friend abandoned her when she got a boyfriend and skyrocketed to the upper-echelons of the high school social scene. When Becca is hired to break up the most popular couple in the school and, coincidentally, her former best-friend and her boyfriend, she knows it won't be easy, but a little revenge does seem in order. What she is isn't counting on is how this job will change her view of love, relationships, friendship, and the whole break-up business.

Philip Siegel's debut novel is one of my favorite reads so far this year. The Break-Up Artist is funny, entertaining, well-written, and has the perfect amount of depth. Somehow Siegel manages to keep Becca real, grounded, and most-importantly, likeable despite all of her questionable choices.

The Break-Up Artist is out April 29th, 2014. Review copy from NetGalley. 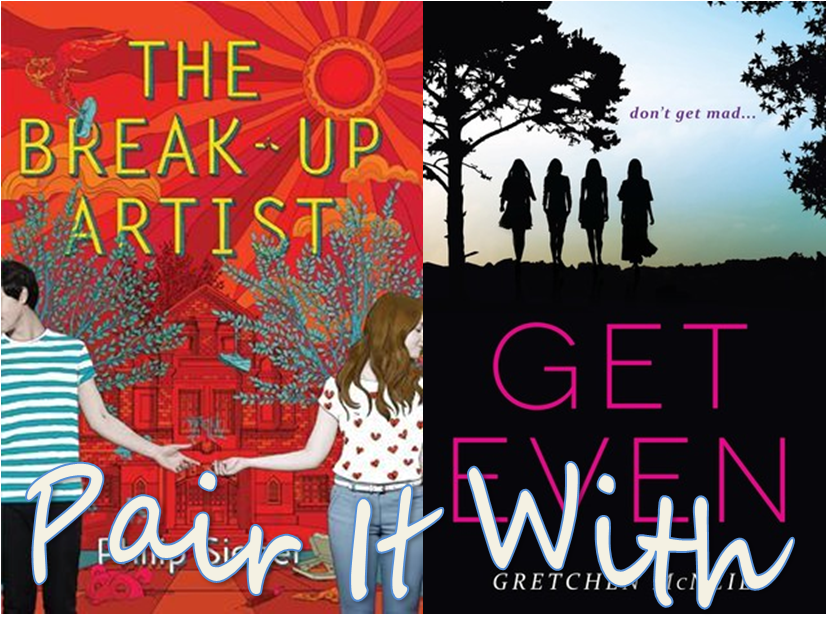 Olivia, Kitty, Margot, and Bree are members of the secret group DGM (short for Don't Get Mad). Their goal? To take down the ruthless popular crowd at their exclusive Catholic prep school.

I love the premise of a secret society of vigilantes. It has the potential for all sorts of moral implications and questions. What happens in Get Even is that DGM gets a taste of their own medicine kicked up 100 notches when a classmate is murdered and DGM is implicated. The girls need to clear DGM's name without anyone finding out who was behind all of DGM's pranks. Also someone is leaving them envelopes full of their own incriminating secrets.

I like just about everything about this book. The mystery is thick. The characters are worthy. But (and this is a big but) what I don't like is the cliff hanger and, thus, the lack of answers. It would have been nice to get a few answers. Just a few. A reader needs some reward at the end of a mystery like this.

Get Even by Gretchen McNeil is out September 16th, 2014. Review copy from Edelweiss.