Pair it With: City of Jasmine and City of the Sun

I am a longtime fan of Deanna Raybourn's Lady Julia mysteries. City of Jasmine is the first time I have read one of her 1920s novels. City of Jasmine stars aviatrix Evangeline Stark (I love her name). She is doing a tour of the seven seas in her airplane when she receives a mysterious photograph of her husband Gabriel Stark taken near Damascus. Everyone thought that Gabriel drowned with the Lusitania. Evie makes a detour from her tour to head to Damascus and put to rest her feelings for Gabriel once and for all.

City of Jasmine is kind of cross between Indiana Jones, Lawrence of Arabia, and Amelia Earhart. Unfortunately it doesn't quite live up to the awesomeness of any of these things. Gabriel, like Brisbane of the Lady Julia novels, is surly and difficult and the keeper of many secrets. Evie feels the need to constantly assert her independence (I don't blame her, it is the 1920s), but she is also naive and tempestuous. The two spend so much time bickering. Granted bickering does seem to be Gabriel's love language, and he also uses these little spats to distract Evie from his secrets, but I got so tired of reading about the two fighting.

I have not read Raybourn's  A Spear of Summer Grass but there are connections between the characters in that novel and City of Jasmine. I would say it's something of a companion novel. The short story Whisper of Jasmine appears to securely connect the two novels.

City of Jasmine is out February 25th, 2014. Review copy from NetGalley 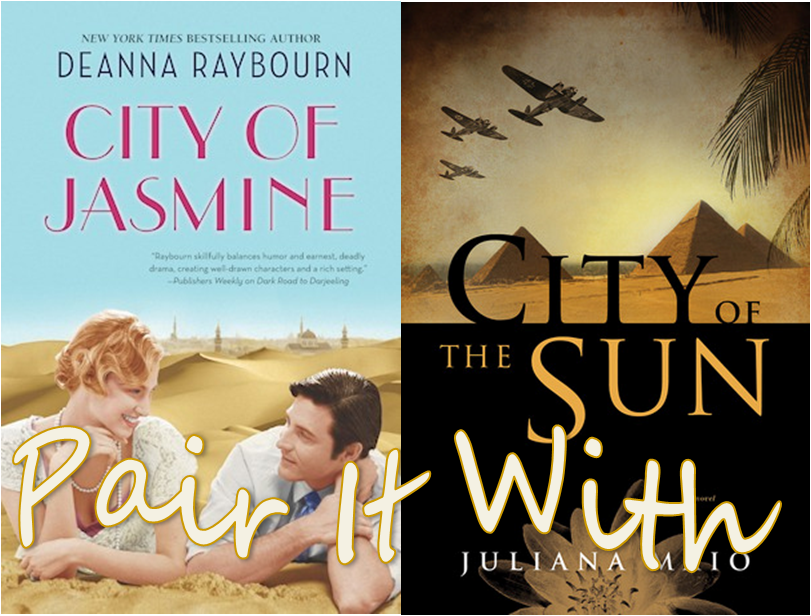 City of the Sun takes place in Cairo in 1941. A German spy and a American newsman are searching for Erik Blumenthal, a Jewish scientist who has fled Germany and Vichy France.  Juliana Maio's book reminded me of the books I used to read in my youth--books about Jewish refugees, WWII, and Zionists, like Leon Uris's Mila 18 and Exodus.

City of the Sun is written in third person singular and alternates between chapters that focus on Mickey Connolly, Kesner the German spy, and Blumenthal's sister Maya. The novel gives the reader a glimpse into the Egypt of the 1940s. Its richness, its politics, its people. I really enjoyed this aspect of the book. However, the intrigue is not particularly sophisticated--coincidence makes a significant contribution to the plot. The reader gets a good idea of the status of Jews and Jewish refugees in Cairo, however, for the most part the novel is about foreigners in Egypt and westerner's intervention in the affairs of the Middle East. I do wish that we could have followed a native Egyptian as well, even one that was conspiring with the German spy, so that we could gain insight into their motivations as well.

City of the Sun is out March 11th, 2014. Review copy from NetGalley