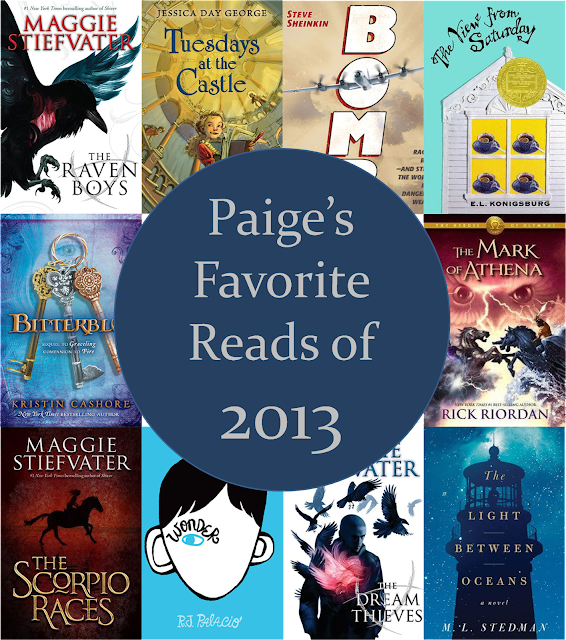 Favorite Read of 2013: The Scorpio Races by Maggie Stiefvater
Ms. Stiefvater had me hooked from the very first line.  This story brings to life the myth of water horses in a world where these horses are as real as the people who race them.  The story is told from the perspectives of Sean, the reigning champion of the Scorpio Races, and Puck who is willing to do anything to save her home.  I am still in awe of the voices of these characters.  It is extremely difficult to write two narrators with different voices, but Ms. Stiefvater mastered it.  Join Puck and Sean to see what will happen as they ride in the Scorpio Races.

Favorite Middle-Grade Novel: Tuesdays at the Castle by Jessica Day George
Castle Glower has a mind of its own and every Tuesday, it changes.  Rooms appear and disappear as the castle sees fit.  Princess Celie loves her castle and understands it in a way no one else can.  After their parents are ambushed on the road, Celie and her siblings have to work with the castle to protect it from intruders.  Imaginative, inventive, and very fun, Tuesdays at the Castle will leave you smiling and wanting more of Princess Celie and Castle Glower.

Favorite Audio Book: The Mark of Athena by Rick Riordan
While I originally read this in 2012, I didn't listen to it until this year, and I was very happy with the audio version.  In this, the third book in the Heroes of Olympus series, the seven heroes of prophecy come together at last to begin their journey to the ancient lands.  Annabeth has been given a special and dangerous mission from her mother, Athena, which takes all our heroes to Rome.  Probably my favorite from this series to date, The Mark of Athena has the perfect balance of a fascinating quest and difficult interpersonal relationships.

Favorite Non-Fiction: Bomb: The Race to Build--and Steal--the World's Most Dangerous Weapon by Steve Sheinkin
"A former textbook writer, STEVE SHEINKIN has dedicated his life to making up for his previous crimes by crafting gripping narratives of American history" (taken from his bio) and has he ever!  Bomb was a suspenseful and fascinating read.  I learned so much about the atomic bomb race, but just felt like I was reading a story.  I love non-fiction that reads like fiction and Mr. Sheinkin delivered.

Favorite Re-Read: The View from Saturday by E.L. Konigsburg
I am of the belief that a book worth reading is worth re-reading and The View from Saturday never disappoints.  I chose to read it this year in honor of the passing of author, E.L. Konigsburg.  She is one of five authors to be awarded two Newberry awards--and hers are 30 years apart!  In this, her second winner, she starts us off near the end of the story of four unlikely friends and their exceptional teacher. The five are training together for the Academic Bowl and finding themselves along the way.

Favorite "Underdog" Tale: Wonder by R.J. Palacio
I loved this story of August Pullman--a fifth grader with a facial deformity and a huge heart.  Auggie is doing his best to show his classmates that he's just a regular kid like them.  Ms. Palacio tells Auggie's story from several different perspectives and succeeds in capturing the emotional challenges of being a member of Auggie's life.

Favorite Setting: Bitterblue by Kristen Cashore
I am convinced that a fantasy novel is only as good as its setting and Kristen Cashore created a fascinating world in her books, Graceling and Fire.  She sets up the magic of the Graceling Realms in the first two books, but it's the non-magical elements that captured me in Bitterblue.  Queen Bitterblue is doing her best to help her people heal from the reign of her father, King Leck.  To do so, she sneaks into Bitterblue City by night.  I loved the night life in the city, especially the story rooms.  It is the perfect place for the people to uncover the mysteries of the past.

Favorite Book Group Read: The Light Between Oceans by M.L. Stedman
This book is full of moral dilemmas that leave you asking yourself, "What would I have done?"  Ms. Stedman writes a book full of emotion with great twists and turns.  Isabel and Tom go through many challenges in their island home, alone except for each other.  The book will leave you reeling and will be stuck in your brain for days.

Favorite New Series: The Raven Boys and The Dream Thieves by Maggie Stiefvater
Quickly becoming one of my favorite authors, Ms. Stiefvater's new series gets stuck in my head.  I find myself back in the world along the ley line searching for Glendower with Blue Sargent and her Raven Boys.  Blue, the only non-clairvoyant in her home, uncovers mysteries even she didn't see coming in the first two books of this series.  I couldn't put the books down and felt disappointment when they ended.  I felt I could pick them up and immediately read them again.