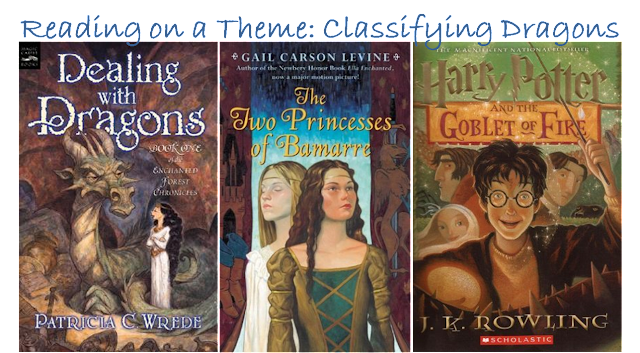 Once They All Believed In Dragons

Once they all believed in dragons
When the world was fresh and young,
We were woven into legends,
Tales were told and songs were sung,
We were treated with obeisance,
We were honored, we were feared,
Then one day they stopped believing--
On that day, we disappeared.
Now they say our time is over,
Now they say we've lived our last,
Now we're treated with derision
Where once we ruled unsurpassed.
We must make them all remember,
In some way we must reveal
That our spirit lives forever--
We are dragons! We are real!
~ © Jack Prelutsky
website: Jack Prelutsky

I was drawn to this poem the moment I heard it simply because I love dragons. There are so many different and interesting portrayals of dragons in literature and I wanted to share some of my favorites with you.

The Good--Dealing with Dragons by Patricia Wrede:

Dealing with Dragons by Patricia Wrede tells the story of Princess Cimorene who is a truly unusual princess. She takes no pleasure in "proper pursuits" so she runs away and befriends Kazul, an equally unusual dragon. Kazul is a good dragon, morally speaking. She treats Cimorene with kindness and entrusts important tasks to her. Kazul works to keep the Enchanted Forest safe from the wizards and their cohorts who seek to use the power of the forest for personal gain.

The Undefined--The Two Princesses of Bamarre by Gail Carson Levine

Gail Carson Levine's The Two Princesses of Bamarre is a world inhabited by many magical creatures. There are gryphons, specters, ogres, and dragons. We meet the dragon, Vollys, when she captures our heroine, Princess Addie. Vollys seeks entertainment; as long as Addie keeps her entertained, Addie lives.  Vollys is indefinable morally because she plays by her own rules. She seeks entertainment and rewards Addie for providing it, however, she openly admits that she will eat Addie one day. In Vollys words, "Believe me when I say I want you to stay a long time with me. I am sad when I am alone. My unhappiest hours are after I have destroyed a guest. I have never forgotten any of you."  Vollys mourns the deaths of her "guests" despite the fact that she brings about their demise.  She truly follows a unique moral compass.


I wanted to do a section highlighting an evil dragon, however, I am having a difficult time thinking of one who is purely evil. Vollys isn't purely evil because we understand why she does the things she does. Levine explains Vollys' thought process and in so doing gives her a unique set of morals, they do not echo human morals, but they are there all the same.

So what about dragons whose thoughts we're not privy to? I thought of the dragons in Harry Potter.  Are they evil?s

The Animalistic--The Harry Potter Series by J.K. Rowling
I would argue that the dragons in J.K. Rowling's Harry Potter are not evil, they are simply animals. Take the Hungarian Horntail featured in Harry Potter and the Goblet of Fire.  She breathes fire at Harry and slices his arm with the horns on her tail. Any animal would do the same if a human was threatening her young, as Harry was doing at the time. In this world, dragons are not portrayed as sentient and so they cannot be labeled as moral or immoral. They are simply animals, following their instincts.

Will I find an evil dragon? I'll keep looking and I'll continue collecting my favorite dragons.

Email ThisBlogThis!Share to TwitterShare to FacebookShare to Pinterest
Labels: A Few Thoughts, books