Pair it With: When the World Was Flat (And We Were in Love)

When The World Was Flat (And We Were in Love) starts out a little slow. And it's full of those young adult tropes I'm getting a little tired of: mysterious new guy, strange, sudden connection, visionary dreams, stereotypical friends, small town, absentee mother. So the test became whether or not Ingrid Jonach's debut young adult novel could impress me despite all of that. I stuck with the book because I had this feeling that the pay off was going to be worth it. When the secrets--inspired by Albert Einstein's theories--began to be revealed the book got much more exciting and suddenly had enough that was unlike what I'd read before to be enjoyable and thought provoking. There were a couple of reversals that I was not expecting. I did have some serious issues with Lillie's friends, especially Sylv whose crassness is completely unnecessary. Lillie's mom, however, stepped it up and turned out to be more conscientious parent than I expected. Lillie and Tom aren't destine to become two of my favorite characters of all time, but I liked them well enough.What made the book worth reading, for me, were the fantastical elements. When the World Was Flat is out September 3, 2013. 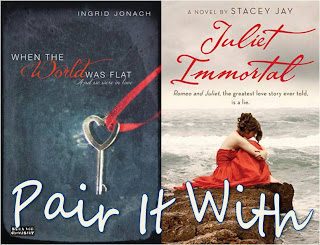 Stacey Jay invented such an interesting premise for her novel Juliet Immortal. I shall try and do it justice in a few words. In Verona all those years ago, Romeo killed Juliet in order to gain eternal life. In the hundreds of years that followed, Romeo and Juliet have been fighting one another, returning to earth again and again to either destroy true love (in Romeo's case) or protect it (in Juliet's). They are each part of a larger organizations of which they understand very little. When the novel begins they are once again at odds, but this time there seem to be higher stakes involved. Juliet Immortal is pretty out there, but I really enjoyed it. The enmity that Juliet feels for Romeo is so palpable, but she is not beyond redemption. She still believes in love, and this could be her second chance. Romeo, on the other hand, was so repulsive at times as his borrowed body began to fall apart. In turns creepy and sweet, I found Juliet Immortal hard to put down.