Today I finished the 7th book in the Harry Potter series. Again. While I was reading the book this time I noticed something I found rather interesting. In the chapter "Godric's Hollow" Harry and Hermione find the graves of Harry's parents. Inscribed on these graves are their birth and death dates. It's the death date that really struck me: "31 October 1981." 1981! That means that Harry was born in 1980. And that means that Harry is only one year younger than me, and that is a little mind-blowing because in 1997, when the first Harry Potter was published in The U.K., I graduated from high school. I suppose J.K. Rowling thought of Harry as 11 in 1990 when she first started working on the Harry Potter series, but I always thought of him as being 11 in 1997.

Why is this so striking to me? Well, because one day my sister and I were sitting in the movie theater waiting for one of the Harry Potter films to begin and to pass the time we began to discuss our place in Harry Potter's world. Paige, we realized, would be the age of Fred and George Weasley. Lucky girl. She would be at Hogwarts for some of the story. She decided she would be in Gryffindor, and we went on to discuss what classes and activities she would do. I, on the other hand, would probably have been the age of Charlie Weasley. So I wouldn't really be close to any of the main characters, but this didn't stop us from discussing what I would do at Hogwarts. We decided I'd better be in Ravenclaw. It just seems the best fit. We thought I would be really good at Transfiguration and that I would have ambitions to come and teach at Hogwarts someday.

So you see this whole Harry-is-only-one-year-younger-than-me is throwing off my supposed time at Hogwarts. Paige and I discussed this problem on the phone today. On the one hand, now I could be at Hogwarts while Harry and the gang are at school. Paige mentioned that I would be Katie Bell's age. I guess I don't come off too bad in this adjusted time frame. Paige, however, said, "I would be Colin Creevy's little brother's age. No wait, I would be younger than Colin Creevy's little brother." She vastly prefers the earlier scenario we had developed (and who could blame her). At least, either way, Paige and I would get to go to Hogwarts together for a couple years.

Despite these musings, I can't really get my mind around the fact that, according to the grave marker, Harry Potter takes place in the 1990s and not the 2000s because if Harry leaves for Hogwarts in 1991 then the final battle takes place in 1998. (Does this look like 1998 fashion to you?) 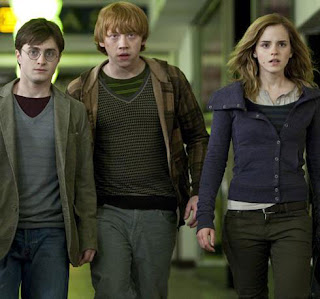 And, as exciting as my new Hogwarts's identity could be, I think I prefer the one that Paige and I originally invented, perhaps just out of pure nostalgia. As I told her on the phone today, with my old identity I didn't go to school with Harry, but if I achieved my life's ambition, when Professor McGonagall became Headmistress (that's inevitable right) I could be the new Transfiguration professor and eventually teach Harry's children.
Posted by JoLee at 8:47 PM